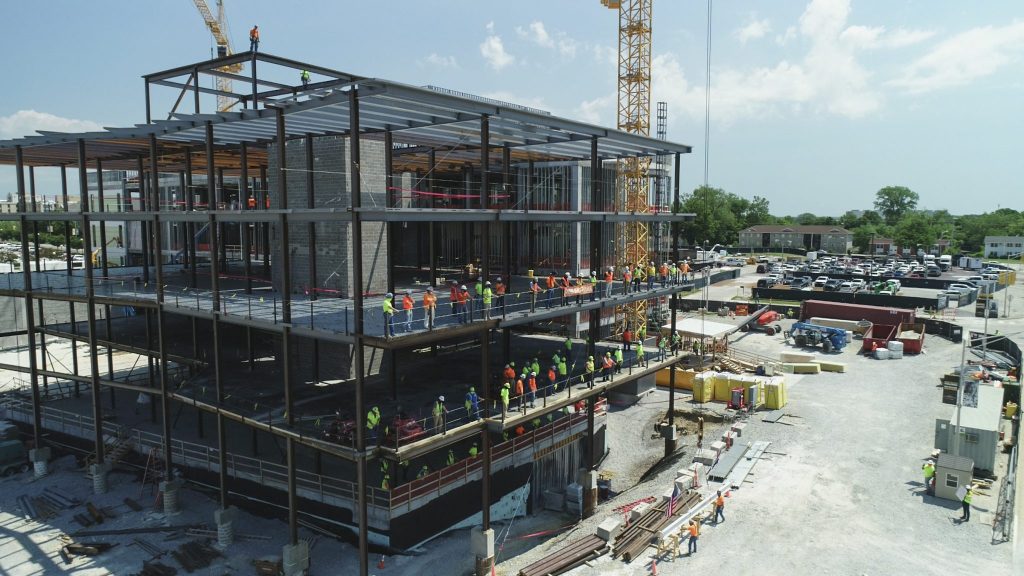 Construction specialists celebrate the topping off of the NextGen Precision Health Institute on June 18, 2020.

Jennifer Sullivan is a facilities project manager on the University of Missouri’s planning, design and construction team. She played a role in early site development for the NextGen Precision Health Institute, the university’s newest research facility. The institute, a cornerstone of the University of Missouri System’s NextGen Precision Health Initiative, is expected to be completed by Oct. 19, 2021.

Sullivan is a 2004 Mizzou graduate with a degree in civil engineering, but her connection to the university — and the life-changing work of its researchers — runs even deeper.

“My niece and nephew have a rare blood disorder treated by MU Women’s and Children’s and one of my best friends is a cancer survivor who was treated at MU Health Care,” Sullivan said. “Being involved — with even just a little piece on the outside of the building — is important to me because I know what will happen on the inside.”

More than 30 alumni working across different specialties are involved in the NextGen Precision Health Institute at MU. Together, this Mizzou Made team is helping build the future of precision health and interdisciplinary research in Missouri — and the world.

Among those alumni is David Peterson, a 2011 graduate with a degree in civil engineering. Peterson is serving as a structural engineer on the project for the Kansas City-based construction firm Burns & McDonnell. He has a personal connection to the institute as his brother will work in the facility once it’s complete as an IT project manager for Siemens Healthineers.

Peterson said, “I feel proud to be on the forefront of something so significant to the healthcare industry and share this experience with my brother. Never did I imagine I would design a building that my brother would one day work in to help support life-saving research. It is an honor to be in such a position.”

Hendrix joined the project in October of 2018. He was part of a collaborative group that met with researchers to understand how the facility could be built to best support the development of biomedical innovations. Because of these early discussions, Hendrix said that the NextGen Precision Health Institute will have many resources that are the first of their kind on campus, including low-humidity microscopy suites that will allow frozen samples to remain viable for longer.

“I hope the design features that we’ve implemented will help the scientists working in the facility find more cures,” he said. “It’s great to give back to the University of Missouri.”

That sentiment was echoed by John Hequembourg, a 1972 grad with a degree in education. After many years away from the university, Hequembourg returned to Mizzou in 2014 to work on the planning, design and construction team. He is acting as construction project manager on the building.

“It’s great to be involved in projects like this that are going to be here and make a difference for years to come,” Hequembourg said.

The NextGen Institute is part of the NextGen Precision Health Initiative and will unite the four UM System universities, MU Health Care and industry partners to tackle the biggest medical challenges facing Missourians and all of society. For more information, visit the Institute’s website at precisionhealthinstitute.missouri.edu.