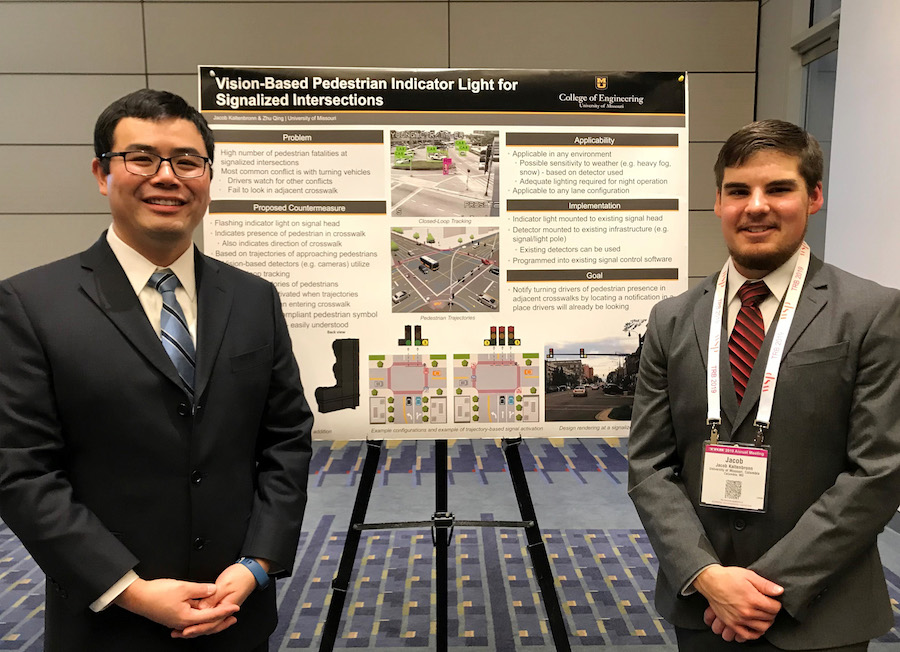 Zhu Qing and Jacob Kaltenbronn’s design was a vision-based pedestrian indicator light which would help drivers be more aware of pedestrians.

Jacob Kaltenbronn and Zhu Qing are veteran competitors in the Traffic Control Device Challenge (TCDC), but this time they took home the gold.

The TCDC is a national competition put on by the Transportation Research Board (TRB) and the American Traffic Safety Services Association (ATSSA) to generate innovative designs aimed at improving traffic safety. The theme of this year’s challenge was to “improve pedestrian and bicycle safety at signalized intersections,” according to ATSSA. The students’ design was a vision-based pedestrian indicator light which would help drivers be more aware of those on foot.

“Our idea was to come up with a device that would detect pedestrians as they begin to enter a crosswalk, and then it would put off a little indicator light on the signal head itself to warn the driver that there’s a pedestrian in the crosswalk,” Kaltenbronn said.

The pair received a $1,500 cash prize and the opportunity to present their design at the ATSSA Traffic Expo in Tampa, Fla.

Kaltenbronn and Qing originally presented their poster detailing the design at the TRB 98th Annual Meeting in January, where transportation experts were able to provide feedback on their work.

“It was good to get that experience of presenting in front of industry professionals,” Kaltenbronn said.

Qing had two years of competition under his belt, and Kaltenbronn participated in 2018, taking third place. But both wanted to come back and see if they could make it further in the event.

“I would just say that the competition is [an] interesting event because there weren’t a lot of restriction or limitations for the problem. We could approach the question from many different angles,” Qing said.

At the end of the week, Kaltenbronn went to the national expo, which is ATSSA’s largest conference, to present their winning design at the Traffic Talk.

Kaltenbronn said he was looking forward to “just getting to interact with industry experts and maybe do a little bit of networking.”

While the cash prize and trip to Florida are obvious perks of being the national champions, Kaltenbronn and Qing see it as much more.

Qing said, “To be there and to know what is going on in this area is really helpful too. Both of us are graduate students, so we need to keep our research cutting-edge.”

Kaltenbronn said, “Winning, it’s more than the money and recognition. [It’s] that what you’re doing is being recognized and could potentially be implemented to save lives in the future. That’s pretty meaningful.”

The team of two put in an immense amount of work to develop and finalize their design, but they wouldn’t have made it this far without the support of their lab and Mizzou Engineering faculty Yaw Adu-Gyamfi and Carlos Sun.

“Our professors are really helpful in giving ideas and suggestions and also helping us develop our ideas,” Qing said.