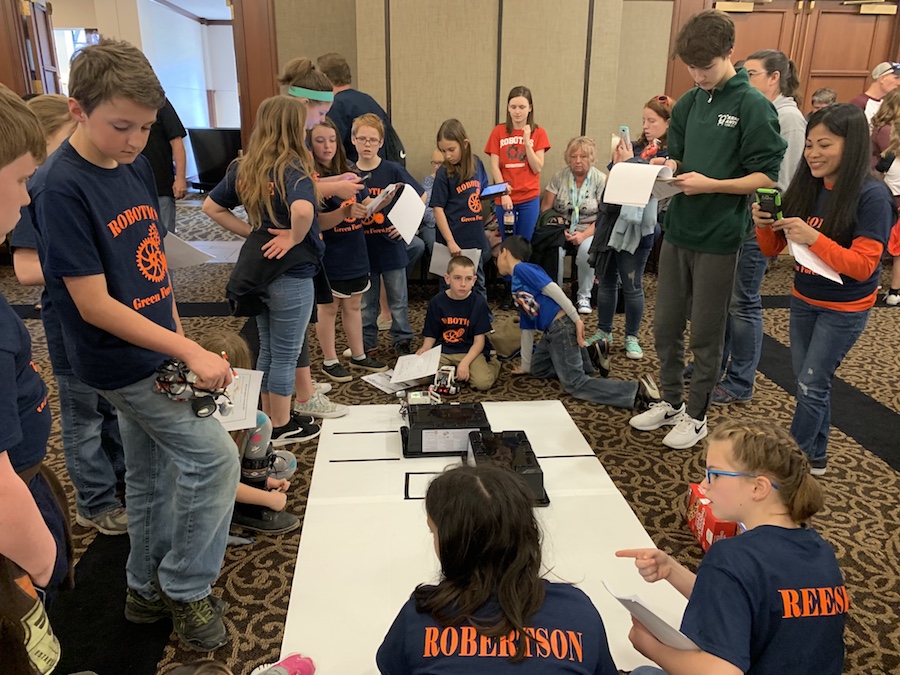 About 400 fourth and fifth graders participated in this year’s Robotics Design Challenge, representing 26 schools from across Missouri. Photo by Danielle DuClos.

About 400 fourth and fifth graders traveled from all around the state to compete Saturday in MU’s 14th annual Robotics Design Challenge, where students put their programming skills to the test to see if their robots could conquer the course.

The event is aimed at introducing students to programming and coding at an early age so they can begin to develop important STEM skills and be exposed to the various possibilities computer science can offer.

Hosted in the Reynolds Alumni Center, the building was packed with students making final tweaks and reviewing their programs before competing. There were 26 elementary schools in attendance, all with multiple teams of students and the support of teachers and parents cheering them on.

The RDC challenged teams to program LEGO robots to navigate throughout an obstacle course — tracking lines, making precise turns around containers and pausing for specific amounts of time to eventually land at an exact location.

Benjamin Latimer, the co-program director and Mizzou Engineering doctoral student, wanted the competition to change students’ perspectives and encourage them to engage with STEM.

“It’s important to give them [an] experience designing and building something because we want them to pursue science and technology in the future,” he said. “And providing that in an accessible and fun way is a good way to do that. It makes them think of math as being fun instead of just what you do in school.”

Teams consisted of two to four students who had seven minutes to run the course trying to get the most points. If the robot didn’t do what they wanted, they worked under the time crunch to reprogram the code. Students would often reprogram multiple times, showing their ability to think on their feet.

Teams were judged by members of Columbia’s high school robotics team, Army Ants, and by receiving mentoring from older peers, the elementary students saw how they could continue on with robotics in the future.

Co-Program Director and senior engineering major Martha Gahl did not have the opportunity to work with computer science or programming until she got to MU. That exposure has influenced her to pursue computer science in her graduate studies. Gahl was excited to see so many students attending because the competition itself is unique.

“I think it’s awesome that they get to start and get their feet wet and try it and see what they really like,” she said. “I think there are a lot of science or math competitions where it’s really individual, and so I hope they realize how important it is to work as teams. They’re all sitting there together working on these problems that come up, and I think that’s really important.”

Kristen Burkemper, a librarian and robotics coach at Eliot Battle Elementary School, was glad she took her students because the experience is invaluable to them.

“They can’t be what they can’t see, so we need to give them the opportunity to see what’s out there and see what they can do with programming,” she said. “Days like today are a great example of that.”