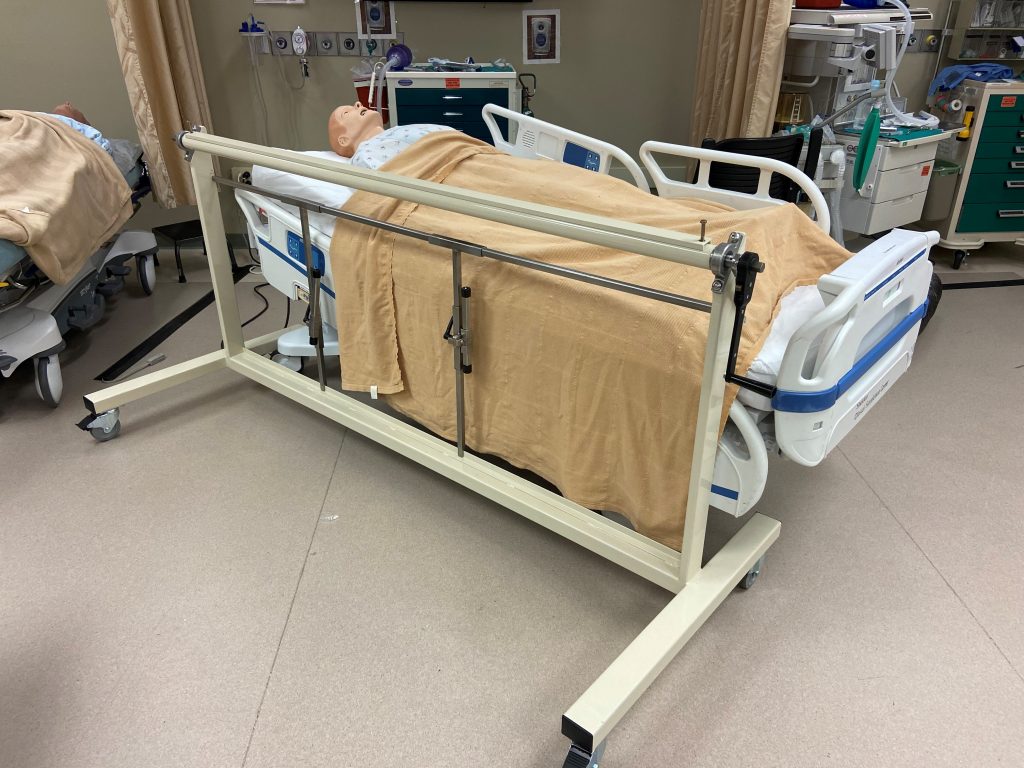 Health care workers know that turning ventilated patients onto their stomachs, a procedure known as proning, helps the patients by opening their lungs. As the COVID-19 outbreak began to spread in Missouri, MU Health Care officials reached out the Hacking COVID-19 Task Force to see if someone could design a device to facilitate the proning procedure.

“Without specialized equipment for this (proning), the process of turning requires many staff members in full-body contact with the patient,” wrote Dr. Laura Hesemann, an assistant professor of clinical child health and medicine at the MU School of Medicine. “Given that full-body personal protective equipment (PPE) is unobtainable, this is not a safe situation for our staff.”

“I became familiar with Columbia Gadget Works while serving as Chief Mentor of the Army Ants high-school robotics team,” Gillis said. “I have had the opportunity to tour their shop and interact with some of the members and was impressed with their hands-on skills and motivation. Thus, when this project was presented to the Hacking COVID Task Force, it occurred to me that this was an ideal group to hand off this project to in order to come up with a practical, working solution in a short amount of time. This is an example of the vision of the Task Force as an MU–community partnership to help meet the needs of health-care professionals.”

Zach Zeman of Columbia said Columbia Gadget Works is a small maker space in Columbia with 10-20 dues-paying members at any time. 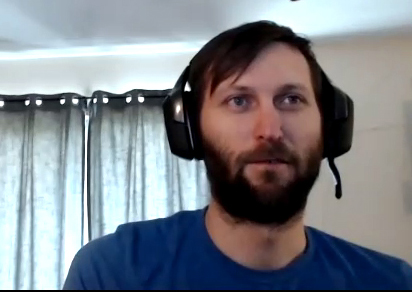 Zach Zeman, a member of Columbia Gadget Works, describes the project during a Zoom call.

“We have a small workshop and a number of small tools available for our members. We all get together to design and build things.” The group was established in 2010 and has been building projects and experience since that time.

Zeman says the group came up with two potential designs: a Stryker-style frame and a fabric roller system.

“We started looking at the Stryker frame because that is what the medical community is most familiar with and that’s what they remembered using in the past,” he said. “It introduced a number of issues from our standpoint of trying to develop something quickly that would be safe.”

Zeman said the roller designs seemed simpler, so they began designing prototypes to show it would be useful. He credits Jeff Thiele MD, for doing much of the heavy lifting. Dr. Thiele retired five years ago as the medical director of the Behavioral Health Service Line at Truman Veterans Hospital, and was an adjunct assistant professor of psychiatry at the MU School of Medicine.

Thiele says he learned the Hacking COVID-19 Task Force was holding Zoom meetings when the outbreak began and listened in. He says they talked about the Stryker frame in that call, but the problem with that device is the patient must be moved from the bed into the device and then back into the bed. He said historically staff would get on both sides of a patient’s bed and pull the sheets to flip them over. 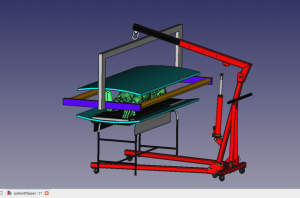 Members of CGW originally considered designing a device based on the Stryker-style frame.

“My first thought was, ‘We need a mechanical way to do that—a way to roll the fabric onto a roller,’” Thiele said. He created the first version from parts he had on hand and shared it with the CGW group and with Dr. Ahmad Salman with MU Health Care. They refined the design and Thiele made a second version, which went through the same process. He has now designed a third version, which they tested May 15. Zeman describes the design on the CGW website. 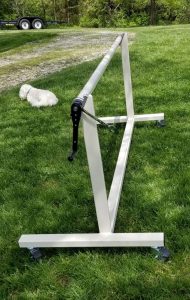 An example of the fabric roller device designed by the team to turn ventilated patients onto their stomachs.

“This system turns the patient by pulling up on the sheet they are laying on. This is done by rolling the sheet onto a cylinder at the side of the bed. The cylinder is mounted on a frame on casters which can be taken to the bedside of the patient needing to be turned. The device can be used with many different bed brands and types.”

“The roller design allowed us to use more off-the-shelf parts and save time and money,” Zeman said. Our roller design uses a crank, so you need a couple of people helping the patient and a third person on the manual hand crank, but that third person does not have to have contact with the patient.”

Zeman says his team has a fairly complete design that matches the feedback they’ve received from the medical community, so they are taking that design and digitizing it to make a 3D model.

“At that point, we can offer it to the world,” he said. “If they need something like this in Italy, they can find this online and make it for themselves, maybe by tweaking the design a bit. As a non-profit, making it available to all is part of what we do.”