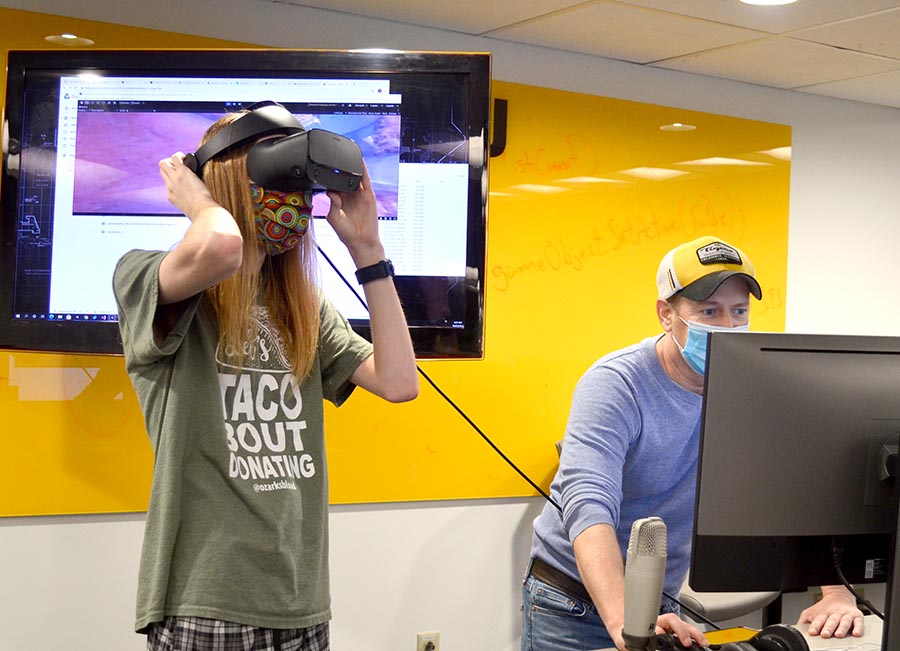 Ryvre Amann, a junior physics major, uses VR goggles to experience a medical procedure up close. The demonstration was part of an undergraduate research class’s field trip to the VR Lab at Mizzou Engineering.

About a dozen students from across campus got to experience various applications of virtual reality during a field trip to the VR Lab at Mizzou Engineering yesterday.

Fang Wang, an assistant teaching professor in the Information Technology Program, and several of her students demonstrated the technology through projects they’ve worked on over the past couple of years.

Visiting students are enrolled in “Introduction to Research, Scholarship and Discovery,” a new course offered this semester. Sarah Humfeld, associate director in the Office of Undergraduate Research, is offering the class through the College of Arts and Science as a way to introduce undergraduates to the research process.

From Goggles to Gamification 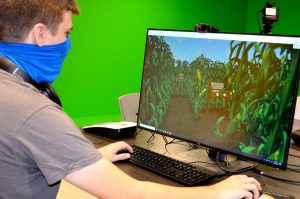 Virtual reality allows users to experience simulated environments. By wearing VR goggles, users can see an entire space, turning their heads to look around the digital environment as they would in person.

“This was the first time I’ve used VR goggles,” said freshman Mackenzie Rutherford. When she put them on, she experienced being on set of the popular television game show, Jeopardy! “It was like I was there.”

At other stations, students used the goggles to see a medical procedure being conducted and to experience a crime-solving game. Elsewhere, Scott Murrell, a graduate student in computer science, demonstrated an augmented reality meteorology program he created as an undergraduate IT student. By holding up a smart phone in front of a computer screen, students could see 3D graphics of clouds appear in front of them.

Joe Hays, a senior IT major, demonstrated a 360-degree corn maze game he helped create with collaborators from the Bond Life Sciences Center. The interactive maze allows users to explore a digital field, stopping at 10 stations to test their knowledge of the corn kernel that becomes popcorn. Creators of the game hope to eventually offer it as course material for middle or high school science classes, he said.

“I’m a big proponent of learning in general, and by gamifying it, you make it a little more interesting,” Hays said. 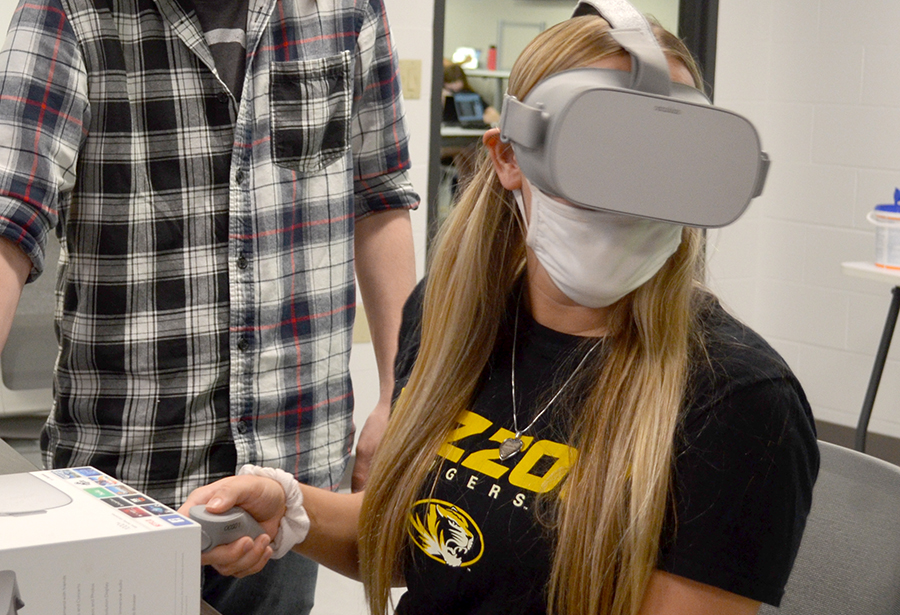 The VR Lab was one of several trips Humfeld’s class has made this semester, she said. They also visited the MU South Farm and the George Caleb Bingham Gallery, and last week heard from a panel of graduate students.

Virtual reality is expected to become an important component of research and education, Wang said. One example is that many physical lab equipment is often expensive and limited. “With VR, you can see and interact with everything virtually,” she said. “It makes education and research resource, such as a lab  more accessible through virtual interaction.”