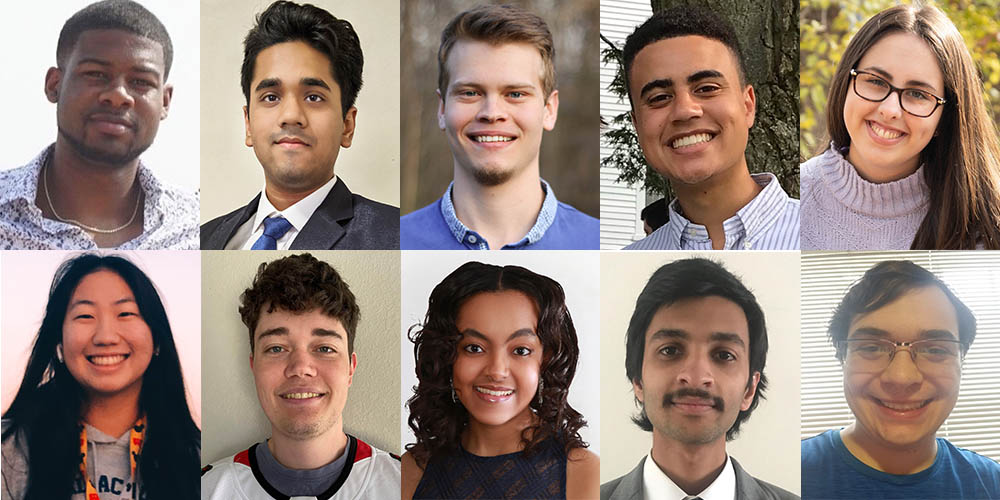 Ten undergraduate students from around the country have spent the past 10 weeks conducting research in emerging technologies such as home health sensors, drones, knowledge graphs and blockchain. The projects are part of the Research Experiences for Undergraduates (REU) program focused on consumer networking technologies.

Funded by the National Science Foundation (NSF), the REU aims to introduce younger college students to research and give them a taste of graduate school. It’s a competitive program: just 10% of those who applied were accepted in this year’s REU program. Participants come from teaching-focused institutions in Missouri, larger institutions around the country and from Mizzou.

“The group is very diverse and come from many backgrounds,” said Prasad Calyam, an associate professor of electrical engineering and computer science and REU director. “That adds a lot of creativity into research projects.”

For many participants, the REU has been their first research experience. Some say it’s also helped them finalize post-baccalaureate plans.

“I was able to experience what it’s like to be in a research lab setting,” said Hosanna Tesfaye, a senior in the Information Technology Program at Mizzou Engineering. “It’s been very valuable, and I’m glad I attended this program and learned so much. This experience really did drive an even greater interest into the world of academia.”

Emily Lattanzio from High Point University in North Carolina agreed. She was considering graduate school prior to the REU, “but now it’s more like I know I want to do it.”

“I think being part of this program made me realize I’m definitely interested in looking for additional research opportunities and definitely looking into graduate school,” said Kelly Ryoo, a student at Cornell University in Ithaca, New York.

Even those not yet sure about post-graduation plans say the program has helped them better understand the research process and has connected them to renowned faculty such as Calyam, who is also Gilliam Professor of Cybersecurity and director of the Mizzou Center for Cyber Education, Research and Infrastructure.

“Just working closely with the mentors and Dr. Calyam has been a great learning experience,” said Cameron Grant from the University of Georgia in Athens.

Hosanna Tesfaye, Kelly Ryoo and Nikhil Vyas, a sophomore computer science student at Mizzou, studied sleep stage classification using non-invasive bed sensors created in Professor Marjorie Skubic’s lab. They compared the bed sensors against polysomnography (PSG), data. PSG is the gold standard when it comes to evaluating sleep stages; however it requires patients to stay overnight in a hospital or clinic connected to multiple invasive sensors. Both processes measure vital health information such as blood flow and quality of sleep.

Using the non-invasive sensors, which are connected to a pad that fits under a mattress, the team developed algorithms to monitor sleep conditions and gauge changes over time.

“PSG usually requires technicians to go through data and clinicians have to score it manually,” Vyas said. “We wanted to automate it. We used a deep learning approach to feed data into a module, so it does it by itself.”

Using patients from Boone County Health Center, the group found that the non-invasive sensors achieved an accuracy of 75% compared to PSG results.

“This research could have a big impact and help a lot of people, so that’s been a great motivation to put a lot of work into this project,” Vyas said.

Ruhan Yi, a PhD in electrical and computer engineering, served as a graduate mentor to the group.

Cameron Grant and Samuel Elfrink from Southeast Missouri State University in Cape Girardeau investigated security frameworks for drone swarms acting as Internet of Things devices. Drones can reliably transmit information such as images or videos in for example, monitoring crops in a large farm, surveillance of national border security or in the scenes of natural or man-made disasters. However, there are cybersecurity concerns because of limited energy and computational resources available to drones. That means drones carrying sensitive information could be compromised before delivering that data to their destination on the ground.

“We want to keep drones and ground control safe and make sure only nodes that are trusted are given communication and computation tasks,” Elfrink said.

The team developed a framework that offloads resource-intensive processes to a trust manager on the ground. They developed an algorithm to detect security risks after a drone has been given encrypted packets of information but before they complete delivery to ground control.

“Drones don’t have a lot of battery and they can only fly for so long, so the more algorithms they have the less time they have to fly,” Grant said. “We’re trying to create ways to provide security without taking away from flight and keeping the drones lightweight.”

Grant has had an interest in drones since fifth grade. The REU experience gave him a better idea of what he wants to do after college.

Calvin Davis and Emily Lattanzio worked on 3D modeling of urban cities for use in virtual environments.

Because drones have limited battery life and can only fly short durations, the goal was to optimize drone flights in advance by simulating routes through virtual reality first.

“We’re working to create a plan in a testbed where people with drones can practice the way they want to fly so they know exactly where the want the drones to go and where to collect data,” Lattanzio said.

The team used 3D point clouds created from actual images, then turned those point clouds into a mesh. Using a game engine, they can turn the overlayed scenario into a virtual environment that can be viewed through VR goggles.

The result would allow a user to simulate a drone flight over a realistic environment prior to deploying the actual drone.

Hank Stafford, a senior in computer science at Mizzou, and Cade Winters from Truman State University worked on a project around the Semantic Web, which is an extension of the internet that seeks to make data such as PDF documents machine readable. They worked with EECS Professor Yi Shang and Tim Trull, Curators Professor in psychological sciences. Shang and Tull created TigerAware, a survey tool that lets researchers collect participant data in real time. The researchers wanted a faster way to access information from previous related research without having to manually comb through hundreds of online studies. Justin Varghese, a PhD student in computer science, served as a graduate mentor to the group.

Stafford has previously worked in Calyam’s lab but said the REU has been eye-opening.

“It’s been interesting working with this. If you had asked me to model a knowledge graph before, I would have said that’s crazy. It takes five readings to get an understanding of knowledge from a book, and we’re attempting to create an automatic model,” he said. “It’s a cool process.”

Stafford also worked on a separate project with Masrik Dahir from Virginia Commonwealth University in Richmond. They looked at how blockchain can improve efficiency and security of insurance claims, specifically looking at ways to flag fraud.

Insurance companies can pay fees to be part of a National Insurance Crime Bureau, however not all agencies can afford to invest in that network, Stafford said.

“If they switch to blockchain processing, it is very fast but there can be attacks on blockchain, too,” Dahir said. “So, the second part of the project was how to prevent attacks and flag fraud so claimants cannot submit false claims.”

The team created ClaimChain, a system that identifies different types of attacks that threaten integrity, confidentiality and availability throughout the claims process. The model flags issues with 98% efficiency.

“Either claim fraud is detected and offloaded to an investigator or an adjustor to attach a risk and settlement value,” Dahir said. “When a transaction is marked as finished, it stays in the blockchain for future reference so you can run individual driver’s license numbers or policy numbers to track what’s been claimed in the past.”

Stafford and Dahir worked with Calyam, and Khaza Anuarul Hoque, an assistant professor in EECS, and graduate mentors Roshan Neupane, a PhD student in computer science, as well as Naga Ramya Bhamidipati and Varsha Vakkavanthula, both of whom are MS students in computer science.

Calyam said he hopes the main take-away for participants was the importance of research, even though it can be challenging.

“Research makes you happy,” he said. “They’ll look back and see they had a rare and blessed opportunity to do research with team mentors. They focused on great projects that will impact the field and help a lot of people, whether it’s better insurance rates, better sleep, more efficiently flying drones or mining knowledge. Each project has a real impact on the country and for all of us to have a better quality of life.”

Learn more about the REU in Consumer Networking Technologies.