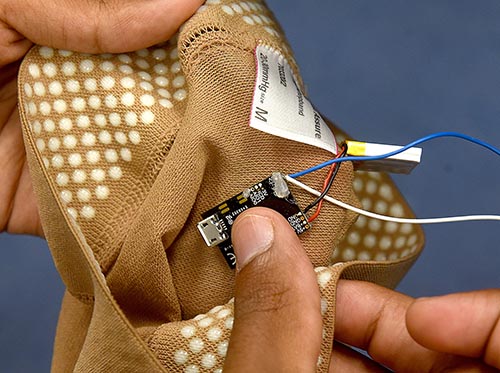 A member of Army Ants shows where a computer chip is place inside a compression sock. Photo courtesy of Don Shrubshell/Columbia Daily Tribune

The Army Ants, Columbia’s FIRST® Robotics Competition team, took home the 2021 Global Innovation Design Award in the FIRST Robotics Competition. The team of high school students received the award for their design of SPOCKS, a Sensor Platform for Orthopedic Compliance after Knee Surgery.

“Nearly 900 teams entered the competition,” said Kevin Gillis, chair of the Department of Biomedical, Biological and Chemical Engineering, “and the Army Ants progressed through semifinalist and finalist rounds to come away with the top prize in the Design category.”

The team received support from Gillis, as well as experts from MU Orthopaedics and the Coulter Biomedical Accelerator.

The Army Ants were one of only 11 finalists from the United States in the FIRST/FRC Global Innovation Challenge and the only finalist from the Midwest. To compete, the team created a basic working prototype of their design including an app and developed a business plan and business pitch.

The device uses a sensor integrated into a compression stocking to measure the range of motion of the knee, the amount of weight the knee is bearing and quadricep activation. These measurements are tracked on an app and used to help patients follow their prescribed exercise regime and meet recovery goals following total knee replacement surgery.

Mizzou Engineering sponsored the Army Ants for several years, and Gillis has been involved since its inception 10 years ago. Mizzou First Alumni Association, a group of Mizzou alumni who participated in FIRST as high school students, also provide guidance to the team.

The Design Award is the latest in a number of successes for the young robotics team. Earlier this year, they placed first in their division of 30 teams in the FIRST Skills Challenge for a robot they developed in 2020.

FIRST has also recognized the team for their STEM outreach activities and recruitment of youth from underrepresented groups. The group has won two Engineering Inspiration Awards from the organization because of the work they do for younger students, including hosting robotics camps.

Interested in studying robotics at a college that supports STEM education? Check out academics at Mizzou Engineering!