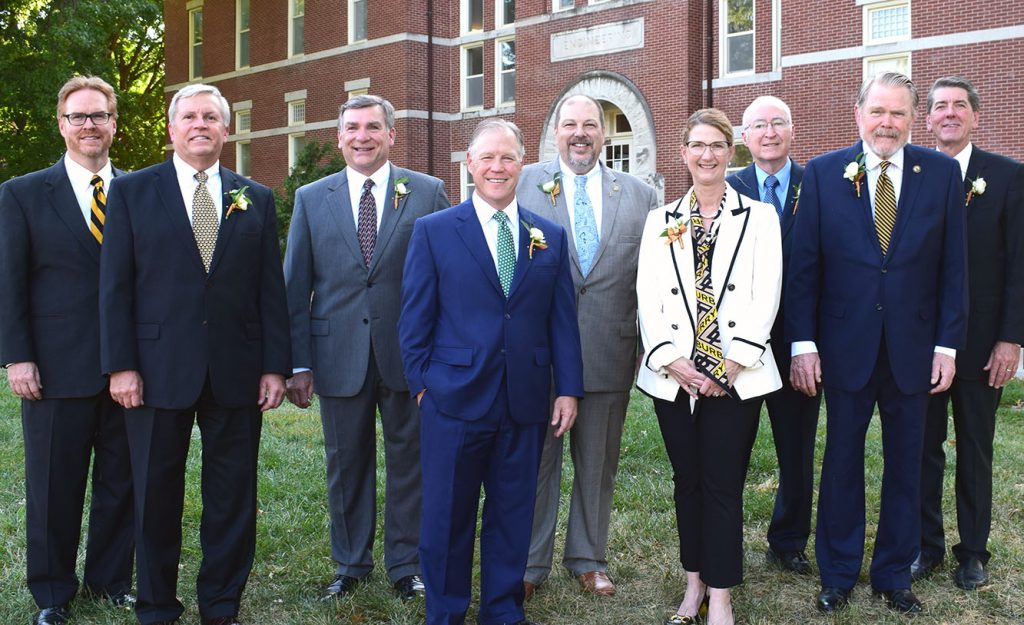 Mizzou Engineering celebrated outstanding alumni during the Alumni Awards Banquet held Friday, Sept. 17. These eight individuals were honored for their leadership, contributions to the profession and commitment to the College.

“We truly have an outstanding network of alumni who exemplify what it means to be an engineering leader,” Mizzou Engineering Dean Noah Manring said. “It’s always an honor to be able to recognize those who have continued to stay involved with our educational and research mission throughout their careers.”

Manring and Matt Osterthun, executive director of advancement for the College, as well as Andy Bonderer, president of the MU Engineering Alumni Organization, presented the awards for both 2020 and 2021.

Since 1951, the College of Engineering has recognized outstanding work of alumni through the Missouri Honor Award for Distinguished Service in Engineering. To date, 273 alumni have earned this prestigious honor for significant contributions to the field and the College.

The 2020 Missouri Honor Award recipients are:

Steve Pelch ’87 earned a degree in mechanical engineering. During his 34-year career with Emerson, Pelch served as chief operating officer and was responsible for the company’s global operations, procurement, supply chain, logistics and human resources. Pelch lives in St. Louis, where he is involved in several organizations and serves on the board of directors of Junior Achievement of Greater St. Louis.

Sheri Smithey ’93 earned her PhD in agriculture engineering from Mizzou. She’s worked for Nestle Purina PetCare for more than 26 years and currently serves as vice president of the Global R&D Network in St. Louis. Smithey is also a longtime champion of STEM education, mentoring and teaching young female engineers at her company, in the K-12 community in St. Louis and at Mizzou. She has also served on the Bioengineering Industrial Advisory Board for Mizzou Engineering.

The 2021 Missouri Honor Award recipients are:

Jeff Cook ’83 earned a degree in civil engineering. After graduation, he worked for the Missouri Highway Department and R.W. Murray Company, where he served as vice president. In 1992, Cook co-founded ARCO Construction Company in St. Louis, where he serves as president and CEO. ARCO is now the seventh largest design-build general contracting firm in the U.S. Cook was inducted as a member of Mizzou Engineering’s Academy of Distinguished Civil Engineers in 2014 and proudly supports construction management education within the civil engineering department.

Bruce Holt ’87 earned a degree in mechanical engineering. Holt spent his early career working in the oil field industry at companies such as General Dynamics, CCC Conveyors and Lurgi PSI. Since 2006, he has been the owner and principal engineer of his own company, Holt Engineering, in Cordova, Tennessee. Holt is known for his high standard of professionalism and contributions to the success of his clients and their businesses.

Since 2009, Mizzou Engineer has honored Bud Moulder by presenting an award in his honor. Moulder was a 1953 and 1955 graduate of the civil engineering program and served as CEO and chairman of the board at R.W. Booker in St. Louis before retiring. Throughout his life, he invested heavily in the College through financial support and involvement with numerous Mizzou organizations.

The James E. “Bud” Moulder Distinguished Alumni Award recognizes those who go above and beyond in their service to the College.

The 2020 recipient is Bob Bloss, who earned an industrial engineering degree in 1977. After working for Colgate-Palmolive Company, Bloss joined Hallmark Cards, eventually becoming senior vice president and chief human resource officer until his retirement in 2019. In 2011, Bloss was inducted into the Industrial and Manufacturing Systems Engineering (IMSE) Hall of Fame, and in 2012, he and his wife, Pam, established the Bloss Faculty Enhancement Fund in the IMSE department.

The 2021 recipient is Lawson Hart, who earned a bachelor’s in electrical engineering in 1964 followed by a master’s in 1966. Lawson retired from Boeing in 2006 as Director of Naval Missile Launch Systems, responsible for running integrated tactical missiles onto planes, ships, submarines and other platforms. Lawson has contributed his expertise to Mizzou as a member of the Mechanical and Aerospace Engineering Department’s Industrial Advisory Council for more than 15 years. He has also assisted with the introduction of a graduate certificate in aerospace engineering. Lawson is a 2007 recipient of a Missouri Honor Award.

Every year since 1984, the MU Engineering Alumni Organization has honored one distinguished alumnus or alumna who has made significant impacts and noteworthy contributions to the engineering profession.

The 2020 recipient of the Citation of Merit Award is Ron Wood, who earned an electrical engineering degree in 1964. After graduation, Wood began work at Black & Veatch, where he served as an executive officer and a member of the Board of Directors from 1999 until his retirement as president and CEO of the Black & Veatch Energy in 2006. Wood and his wife, Judy, established a scholarship in 2005. He is also a member of the Dean’s Advisory Council for the College of Engineering, a lifetime member of the Mizzou Alumni Association and a strong advocate of the MU Engineering Alumni Organization. Wood is the seventh Mizzou Engineer to receive all three distinguished alumni awards from the College.

The 2021 recipient of the Citation of Merit Award is Phil Bennett, who earned a mechanical engineering degree in 1986 and a master’s in 1987. Bennett has worked for Sandia National Laboratories in Albuquerque, New Mexico, for more than 30 years. He is currently a system engineer in Global Engineering Security Systems Group and works with international nuclear and radiological security. Bennett has served as a member of the Mechanical and Aerospace Engineering Department’s Industrial Advisory Board since 1993. Bennett is also a 2011 recipient of the Missouri Honor Award.

Nominations for 2022 College of Engineering awards are now open! Read more about each award and submit a nomination form here by Nov. 1, 2021.