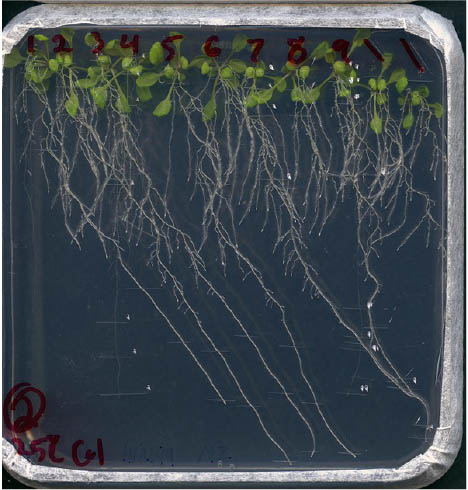 A Mizzou Engineer has developed a software tool that could give farmers greener thumbs. The tool could help enable them to develop crop cultivars that are drought resistant, ensuring roots can reach falling water tables, adapt to warmer temperatures and be more resilient to environmental changes.

Palaniappan is using the tool to help Tobias Baskin, a biology professor at the University of Massachusetts-Amherst, study the impact of temperature on cells within specific zones. The team has been collaborating for more than a decade and recently received a new grant from the National Science Foundation for their work on dynamic zonation in the plant root.

The research could help usher in a second green revolution, allowing farmers and growers to adjust root systems to increase plant yield. The first green revolution, which happened in the 1960s and 1970s, involved selecting for specific properties of plant shoots, specifically breeding lines that grew shorter but stronger without lodging, preventing the large crop losses from fast growing lines that fell over before harvest.

The root of the problem

Unlike animals, which can move and have built-in cooling mechanisms, plants have limited defense against temperature fluctuations. Because heat speeds up all other processes, coping with temperatures changing inside the cells is critical to plant development. However, for the most part, research has focused on the impact of temperatures on plant shoots.

“Temperature is an important parameter for plants, but temperature response in the roots has not been explored,” Baskin said. “That’s a fundamental gap in the understanding of plant biology.” 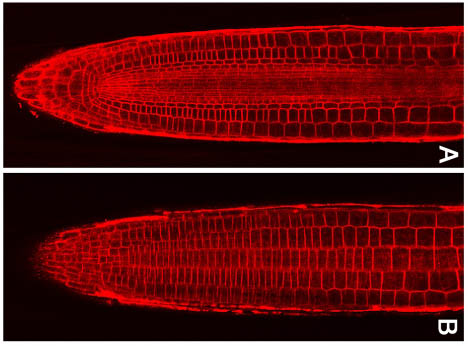 Confocal microscopy image of an Arabidopsis root stained to show cell walls showing the root tip and meristem region. A and B are different optical sections at different depth layers of the root.

Roots have three dynamic zones. At the very tip, the meristem produces stem cells that replicate to support the root system and perpetuate continual growth. From there, cells move into the elongation zone, where they grow quickly before transitioning into the maturation zone. In this final zone, cells take on assigned tasks such as processing nutrients or protecting the external layer of the root.

It’s a complex process further complicated by the fact that cells are moving at different rates in each zone.

Cells in the meristem move slowly, taking about four or five days to travel to the elongation zone. There, they speed up, moving into maturation within about eight hours.

Think of it like a vehicle, Baskin said. A car moving down the road is accelerating at the same rate in the front as it is in the back. If the front were to move at a faster speed than the back of the car, the vehicle would endlessly stretch. As cells in different zones move at different rates, cell growth is adaptive and the root is being stretched.

Palaniappan’s video processing algorithms have allowed Baskin’s team to gain deeper insights into that cellular patterning and behavior. Other imaging systems can measure movement, but only rigid motion — not the dynamic velocity with non-rigid shape changes happening in roots.

“With biological tissues, cellular motion shape dynamics are truly deforming with subtle changes in structure, that is not just articulated motion, which enables cell signaling to coordinate growth and repair at the macroscopic organ scale,” Palaniappan said. “It’s expanding and contracting. We’re able to customize our model for one- to three-dimensional flow to achieve exquisite accuracy.”

And Palaniappan’s system could play a key role in helping humans engineer the plants of tomorrow combining work the CIVALab does at the micro-level with imaging plants using drones at the macro-level to characterize and select for desirable plant phenotypes in the field.

“This may give us the tools we need to manipulate root growth to adapt to a changing environment,” Baskin said. “The world is getting warmer, and we need to be able to grow plants that can cope with that. This will give breeders insights they can use to make more resilient plants.”