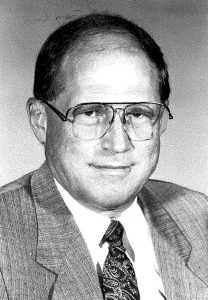 A long-tenured and beloved Mizzou Engineering professor will be permanently honored with the establishment of a new endowed fund and scholarship bearing his name.

Larry David, a former professor and chair of the Department of Industrial and Manufacturing Systems Engineering, will be honored for his dedication to the University of Missouri through this scholarship. His children, Craig David and Tamara Herman, led the efforts to establish the fund. Larry David passed away on Aug. 2, 2019 at age 81.

“It is an honor to be part of establishing this endowment in my father’s name. It brings together two characteristics representative of my father: education and generosity,” Tamara Herman said. “This scholarship will provide an opportunity for young men and women to fulfill a promising career in engineering – a path that was so dear to my Dad.”

“Being able to have an endowed scholarship in Dad’s name, it will live on forever. It represents what was important to him, as far as education and teaching young people,” Craig David said. “Growing other people’s careers was also important to him. Being part of that means a lot.”

After graduating from the University of Arkansas with his master’s degree, Larry David came to Mizzou and worked in the College’s then-Industrial Engineering Department. He worked here for three years before pursuing his PhD at Purdue University. Once completed, Larry returned to Mizzou in 1968, and remained on the industrial and manufacturing systems engineering (IMSE) faculty until he retired in September 2000. For David, teaching was the most rewarding aspect of his long career in the College of Engineering.

“Teaching was my Dad’s passion. It came natural to him and was a perfect fit for his career,” Tamara Herman said. “He cared about his students and would stay after class to answer questions. He wouldn’t leave until the student was able to grasp the concept.”

Tamara explained how her father was way ahead of the curve by taking her to his classes as a child.

“‘Take Your Daughter to Work Day’ didn’t start until 1993, but I went to ‘work’ with my father in the early 1980s. I wanted to see Dad doing what he loved,” she said. “After class, he would take me to the McDonald’s on campus (now the bottom floor of the Student Success Center) and I would get a small sundae for keeping quiet during his class. To this day, I can still recall being seven years old, sitting in the back of the classroom and watching him teach with such enthusiasm.”

Larry David was chair of the department from 1990 until his retirement. Beyond his teaching duties, he was an expert witness in cases involving product liability and slip and fall cases. He gave more than 150 depositions and approximately 20 court appearances over his career. Ever the educator, he took the data and information from those cases and incorporated them into his courses, including “Ergonomics and Workstation Design” and “Engineering Economics,” according to current IMSE chair James Noble.

“He was a master storyteller and did a great job of integrating real life applications of course material into his lectures,” Noble said. “He might turn your stomach a bit as he provided the details of an industrial accident, but you never forgot the point!”

Fondness for Athletics and Officiating 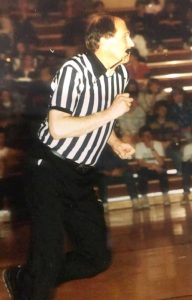 Larry David refereed many high school basketball games around Missouri during his life.

Larry David was more than an MU professor — he was fond of sports, especially Mizzou Football. He purchased season tickets starting in 1973 and didn’t miss a year from then on until his passing. During his streak of season ticket purchases, four generations of the David family went to games.

“My first memories of going to (Mizzou) football games are with him and my grandfather,” Craig David said. “In the late 2010’s, we attended with his grandchildren.”

Larry and Craig David attended many bowl games together, endured 13 seasons of losing football, and then watched the rise of Mizzou Football in the 2000s.

“The most memorable game was attending the MU versus Kansas game at Arrowhead, when we won and ascended to number one in the national polls. It was an achievement he and I both never thought was attainable,” Craig David said.

Beyond being a fan of the Tigers on the gridiron, Larry David was a highly respected referee in both high school basketball and football in Missouri.

“Dad was a referee for over 25 years and went all over the state,” Craig said. “What he enjoyed the most was teaching young officials. He wanted to teach them the basics, put their hand up, do certain things, etc.”

In addition to being a referee, he assigned referees and officials in the Columbia area for several years and worked with the local schools. Craig started officiating games when he started working at Mizzou. He worked with Larry on a regular basis.

“Dad and I got to officiate a lot of ball games together when I started at Mizzou in Sponsored Programs and he was the IMSE department chair,” Craig David said. “We spent a lot of time together officiating.”

Noble is thrilled that Craig David and Tamara Herman are establishing this scholarship in their dad’s name.

“The scholarship will honor his legacy of teaching excellence and give me an opportunity to tell the recipient of it about the professor for whom it is named,” Noble said. “It’s a memory that I want to keep alive.”

Larry David had a humble background as an only child going to a small, rural school, according to his children. Working hard and earning an education became his path out of poverty. This scholarship reflects his commitment to student learning.

“He emphasized the importance of a quality education and the opportunities that came along with it,” Tamara Herman said. “My father’s love for engineering and Mizzou, his passion for teaching, his belief in the value of education and his commitment to student learning will forever be a part of Mizzou with this scholarship.”

“Dad really valued undergraduate education – that was something that was communicated to me my entire life,” Craig David said. “He really valued engineering degrees and he thought engineers could do anything.”

Undergraduate students pursuing a degree in industrial engineering are eligible for the award.