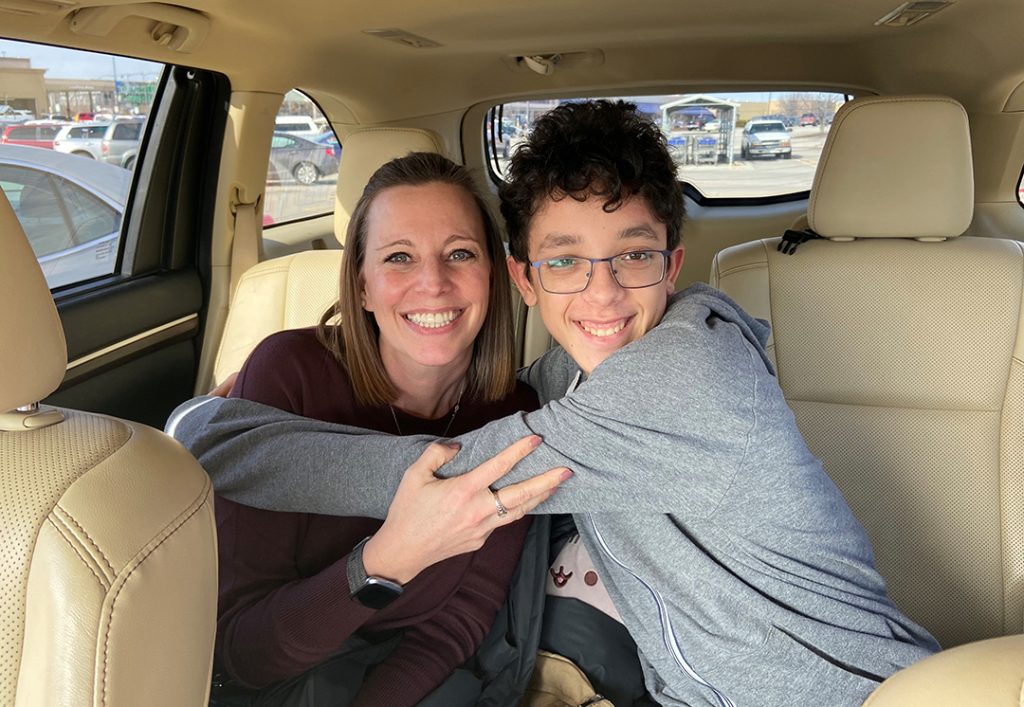 Jami Thompson and Tavian Brown share a hug four weeks after the operation.

In December 2019, the paths of two Mizzou families were linked forever as one Mizzou employee, Jami Thompson, gave the priceless gift of life by donating a kidney to a co-worker’s son, Tavian, just in time for Christmas. As Sandra Brown, Tavian’s mother, said on the Team Tavian blog, “We were co-workers until this summer and now we will be family forever.” However, the long road that led them all to that point took many twists and turns.

Big Changes for a Teenager

In the summer of 2017, Sandra Brown, an academic advisor in the College of Engineering, became worried that her son Tavian could not shake a sinus infection. A trip to the doctor for labs found he had serious issues with renal function.

Tavian’s energy level was so low it was hard to get him out of bed in the morning and he was tired all day long, Sandra said. “Normal activities for Tavian like soccer practice and games became increasingly hard over time, but we had just been blaming this lack of energy to being a teenager.”

Genetic testing revealed a disorder called juvenile nephronophthisis, which creates microscopic cysts in the kidneys. “Over time, the kidneys deteriorate to the point dialysis is needed,” Sandra said. 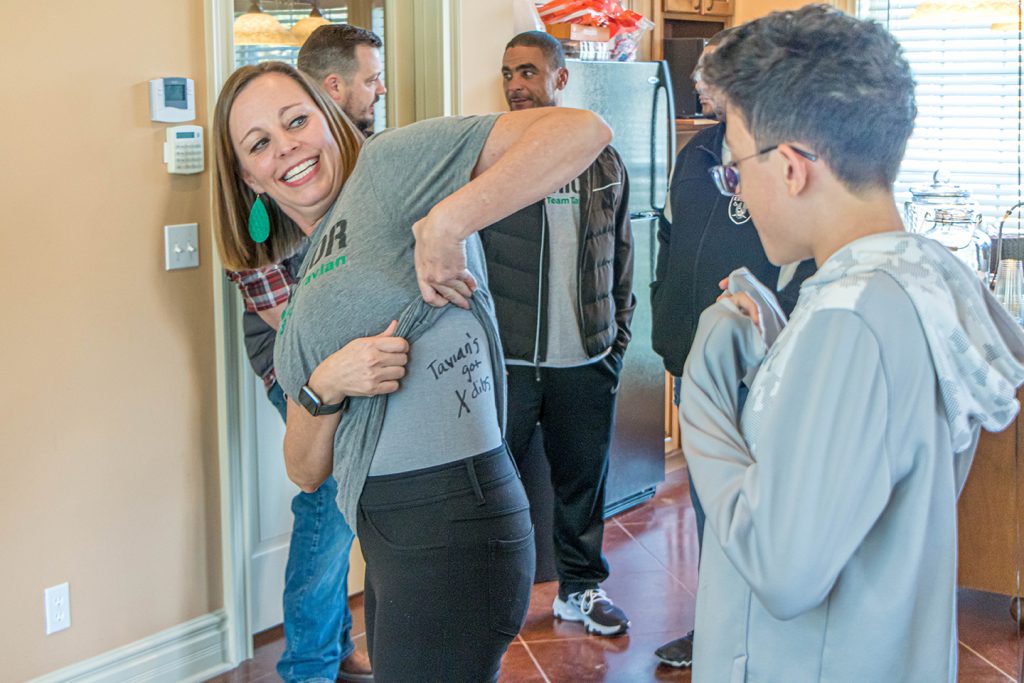 Jami shows Tavian that one of her healthy kidneys is reserved for him.

In February of 2019, Tavian had a dialysis port inserted and underwent treatment each night for eight to ten hours when he slept.

“I get to try a lot of different things—coconut milk ice cream, cashew milk ice cream, a lot of fruits and vegetables, Chinese stir fry, biscuits and gravy, but it must be grain-free, so no gluten and no corn starch and dairy-free and no cured meats,” he said.

Sandra, on the other hand, says the dietary restrictions posed a few problems.

“We basically had to replace our entire pantry and start from scratch,” she said. “Part of this diet change is related to his kidney function but the other part was just trying to keep him healthy for everything else.” Sandra says they did find a local restaurant that serves a lot of food Tavian can eat and Sandra treats him after each surgery. Biscuits and gravy from Range Free on Orr Street is his favorite dish.

Tavian also had the opportunity to meet other young people struggling with renal issues at a kidney camp he attended in Kansas City in the summer of 2019, which was underwritten by St. Louis Children’s Hospital where he received treatment.

The only solution for Tavian’s condition was a kidney transplant. 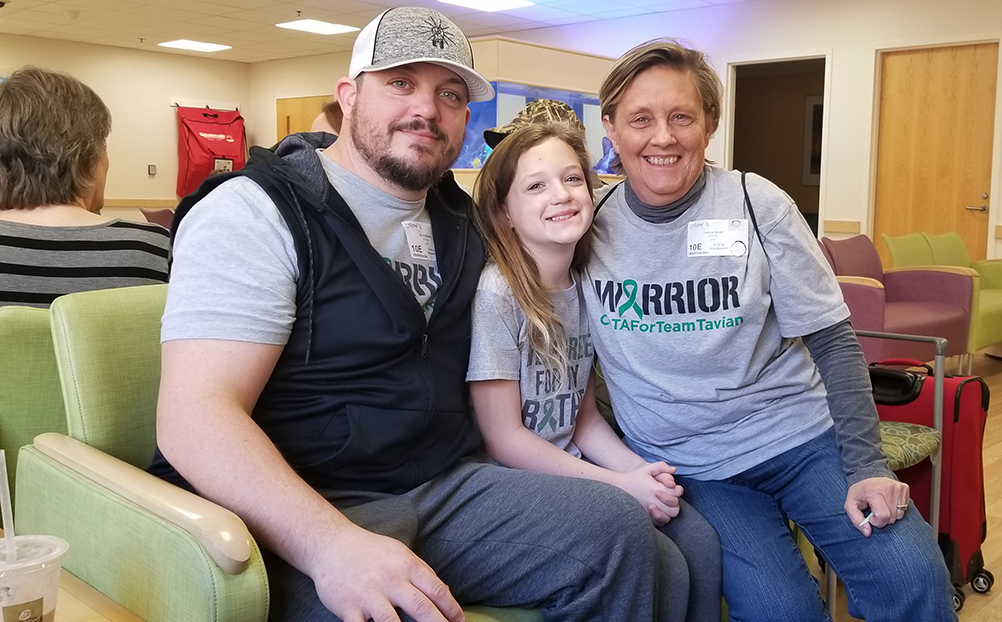 According to Barnes-Jewish Hospital’s Transplant Center website, “In the U.S. there are less than 16,000 kidneys available annually from deceased donors and around 95,000 people who need a kidney transplant.” There are many advantages to living kidney donation, including shorter wait lists and higher success rates. Additionally, living kidneys last around ten years longer.

In the summer of 2018, Jami Thompson had a family member, a cousin, who needed a kidney transplant. Ultimately, there were other siblings who were better matches, but that didn’t stop Jami from pursuing organ donation outside of her family, potentially for a stranger.

“There was nothing to stop me from doing it,” she said. “Being relatively healthy and in a position to afford it financially, there really wasn’t a reason not to move forward with the process.” 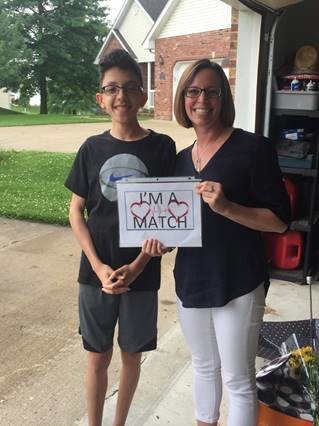 Coming from a family with multiple links to organ donation, Jami knew she would have a strong support system postoperatively. She started looking into the process with Midwest Transplant Network in October 2018. After the initial meeting and decision to move forward, she began all of the rigorous rounds of testing in April 2019 at St. Luke’s in Kansas City to see if she was an eligible candidate to donate. She didn’t realize that, about that same time, Sandra was going through her testing. They even talked about having surgery and recovering together.

Sandra was ultimately ruled out as a potential donor for Tavian. She said Jami, who now serves as the senior analyst for institutional effectiveness in the Office of the Provost, asked if she could be tested to see if she was a match for Tavian. Both were previously on Engineering Staff Council together.

“I stewed and stewed over what to do,” Jami said. With support from her coordinator in Kansas City, they were put on hold and she sent the blood work off to see if her and Tavian were a match.

On a rainy day of June 19, 2019 Jami got the call she was a match. Unable to hold the excitement, she and a fellow advisor drove to Sandra’s home, unaware she wouldn’t be there. When Sandra and Tavian got there, Jami was hiding around the corner and met them with a sign exclaiming she was a match. She was met with tears and hugs.

The surgery date was December 18, 2019, at Barnes-Jewish. The partial laparoscopic procedure meant that donors typically stay two to three days in the hospital and they are recommended to take four to six weeks to recover.

“Everyone said my life wouldn’t change,” Jami said. “So far, nothing has.” 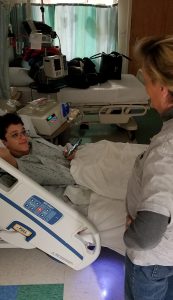 A nurse checks in with Tavian at Barnes-Jewish Hospital in St. Louis.

There are also misconceptions about kidney function when you are a donor.

“When you have two (kidneys) and you take one away, you think you’re at 50% but over the course of a year or so, that kidney will pick up function so you should only lose 25-30 percent of function,” Jami said.

In November of 2019, Sandra and Jami’s families got together for a Transplant Celebration to meet each other families in Columbia.

“It was really nice and kind of connected us all a little better,” Sandra said. “Our families and support systems had a chance to meet before we all traveled to St. Louis for the big day.”

Jami’s surgery to remove one healthy kidney was done at Barnes Jewish Hospital and Tavian received his new kidney at St. Louis Children’s Hospital on December 18. The procedure took about four hours total. 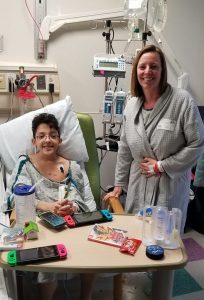 Tavian and Jami at Barnes-Jewish Hospital.

A New Year, A New Beginning

Tavian was discharged on December 24th, making it home before the New Year. Sandra says everything went very well with just a few minor issues and Tavian is back home and behaving like a typical 15-year old.

“We’ll have an appointment twice a week to check his blood which will indicate if his body is going through any rejection,” she said. Tavian was cleared to return to school on February 11th after eight weeks away. While at home, Tavian had the opportunity to work with a homebound teacher through the Southern Boone School District to help him keep up with work for his freshmen year of high school.

Tavian plans to take good care of himself post-transplant. If he could share some tips for others going through this process, “I would just tell other people to do what you need to do, take your medicine, listen to your doctors and make sure you do the right thing,” he said. “Don’t be scared because it will go by quickly and it will be okay.”

Now that Tavian has a healthy, functioning kidney he is excited to get back to some of his favorite activities like the high school band. He also plans to go back to kidney camp, Camp Chimer, this summer and eventually become a camp counselor.

Jami was home in just two days and returned to work half-days at the beginning of the semester. The only caution Jami had for anyone considering organ donation is, “You can’t get in a rush for this process. Everything takes a while.” She is hoping to normalize the process so that anyone thinking about donation could see how it could help someone, whether it is a family member, friend or a stranger. 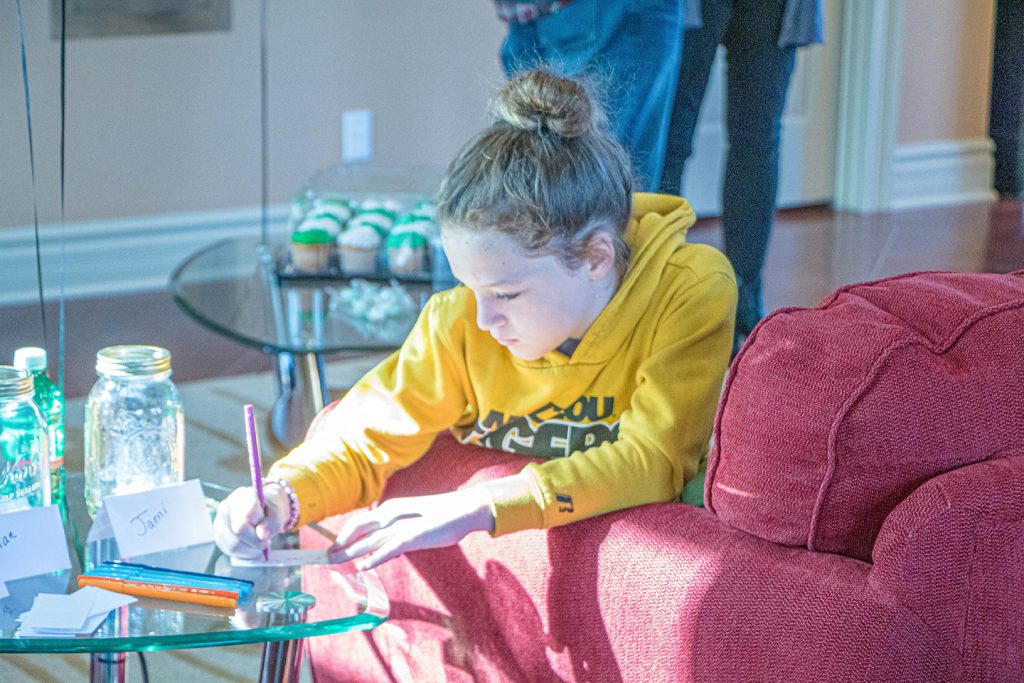 Friends and family wrote recovery notes for Tavian and Jami after the transplant.

The surgeon who did the transplant operation reportedly said they are a perfect fit.  He was referring to the kidney, but the whole process has brought two Mizzou employees and their families closer together than they could have imagined. Jami said the fact Sandra was unable to donate was a blessing in disguise.  Sandra was able to care for and focus on Tavian after the operation; being a caregiver and recovering at the same time would have been more of a struggle.