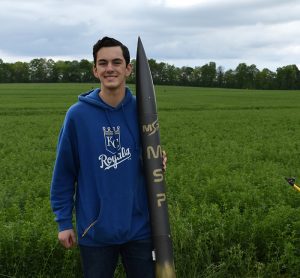 As a child, Mark Magnante was interested in everything related to space. Growing up in California, movies were also a huge part of his childhood and influenced him greatly.

“Seeing movies like ‘Star Wars’ in theaters when it was released made my imagination just run crazy with dreams of the stars,” Magnante said. “Growing up and seeing America’s history and prospective future in space, I just knew I wanted to be a part of that.”

A senior in mechanical and aerospace engineering, Magnante’s enthusiasm for space travel and transportation propelled him to being awarded the 2020 Space Transportation Scholarship from the American Institute of Aeronautics and Astronautics (AIAA). This organization only awarded 12 nationwide scholarships this year.

“Being awarded the scholarship is a tremendous honor and truly means a great deal as I can provide a bit more financial aid for my final semester at Mizzou,” Magnante said. “I cannot truly express how grateful I am.”

The AIAA committee that awarded the scholarship wants to “foster continuous improvements in existing space transportation systems.” According to Magnante, this includes current launch service providers like SpaceX and could include space tourism ventures like Virgin Galatic.

During his undergraduate studies, Magnante determined he wants to help find ways to improve space transportation. This would include working on more efficient propulsion systems or helping the United States go back to the moon.

“I simply would love to be involved in any opportunity involving that,” Magnante said.

In the space transportation industry, Magnante wants to focus on propulsion-related studies or hypersonics. These are two areas he believes are on the cusp of major scientific breakthroughs. Magnante singled out the potential breakthrough of a rotating detonation engine (RDE) to significantly increase rocket efficiency. He has been following developments in that research area for the past 18 months.

Magnante’s enthusiasm for rocketry and space transportation extends beyond the classroom, as he is the propulsion lead for the Mizzou Space Program, a student organization that was to participate in the 2019-2020 Spaceport America Cup competition prior to it being canceled this year. In addition, he attended the 2019 Joint Army, Navy, NASA, and Air Force Propulsion Conference as part of an internship. Lastly, he interned with Northrop Grumman in summer 2020 in their Space Systems sector in Ogden, Utah.

“I worked on helping their flight test team prepare for work on a next generation military rocket,” Magnante said. “This was a wonderful opportunity and really helped show me another side of the industry.”

Magnante is exploring his options after graduation, as he is interviewing with employers and also exploring graduate schools. Whichever way he selects, Magnante will be grateful for his time at Mizzou as an undergraduate student.

“Mizzou just felt like it was the best option for me (after touring other schools). I truly am happy that I made this decision and cannot imagine having my undergraduate education elsewhere,” Magnante said.