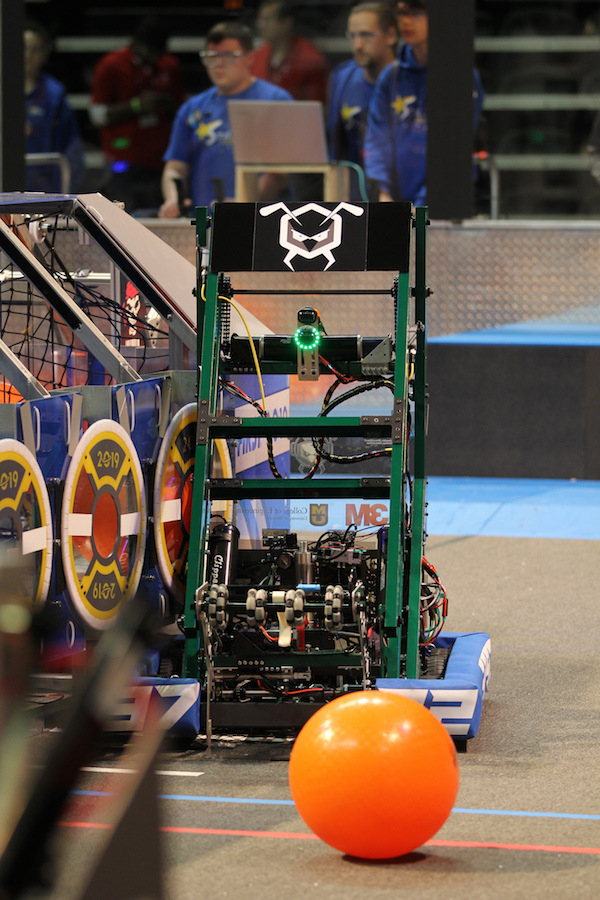 The Army Ants recently qualified for the FIRST Championship in April in Houston by finishing in the semifinals of the Rocket City Regional in Huntsville, Ala. Photo courtesy of Kevin Gillis.

The Army Ants FIRST Robotics team has been busy collecting awards and accolades at competitions, and they’ll try to claim the biggest of all next month.

The team recently qualified for the FIRST Championship in April in Houston by finishing in the semifinals of the Rocket City Regional in Huntsville, Ala.

Army Ants is made up of local high school students who design robots to complete specific tasks outlined by FIRST Robotics, an organization responsible for putting on regional and national robot competitions in order to build interest in STEM nationwide for students high-school age and younger. It is mentored by Biomedical, Biological and Chemical Engineering Professor Kevin Gillis, Biological Sciences Professor Anand Chandrasekhar and engineer Andy Winslow.

The Army Ants also earned a $5,000 grant from NASA during their time in Huntsville by winning the Engineering Inspiration Award in recognition of their STEM community outreach.

“The Army Ants have established partnerships with community organizations such as Granny’s House and GradeAPlus, and last summer the Army Ants ran the robotics portion of a camp that targeted migrant kids throughout Missouri,” Gillis said. “In addition, Army Ants have also helped hundreds of Boy Scouts earn the robotics merit badge. The Army Ants already have four outreach activities planned for April, including robotics camps with Granny’s House and Benton STEM Elementary, helping out at the MU Robotics Challenge and displaying a robot at Show Me Mizzou Day.

In addition to earning a spot at the championship, the Army Ants finished in second place overall and won the Innovation in Control Award at the recent Miami Valley Regional in Dayton, Ohio.