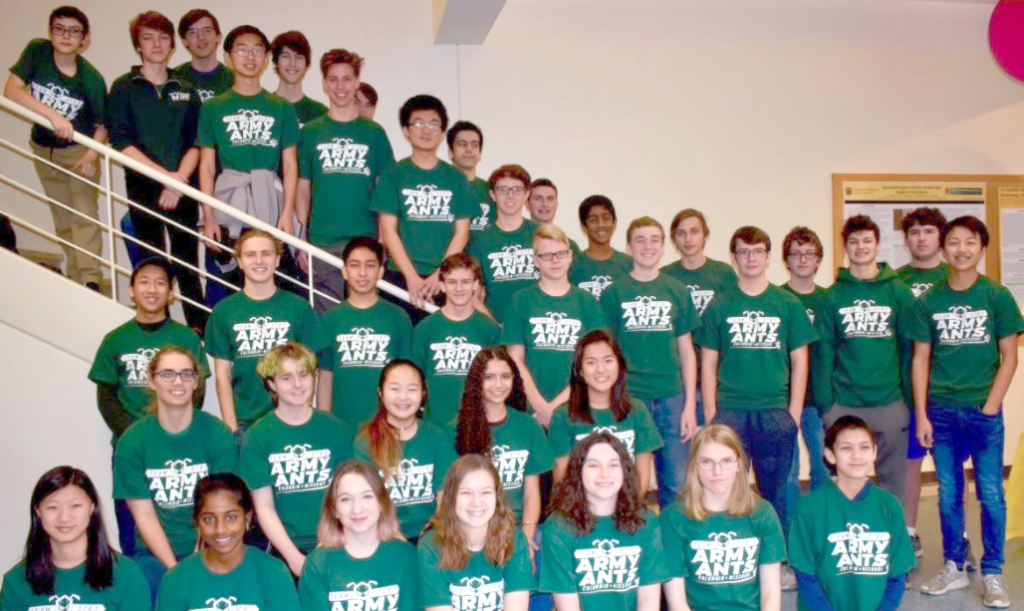 Members of the Army Ants (pictured prior to COVID-19 restrictions).

Columbia’s FIRST® Robotics Competition team is one of just 20 teams worldwide, and the only team in the entire Midwest, to be selected as a finalist for the FIRST Global Innovation Awards. The team — a group of high school students known as the Army Ants — is developing a Sensor Platform for Orthopedic Compliance after Knee Surgery, or SPOCKS. It’s a wearable platform for monitoring patient compliance following total knee replacement.

“This is a significant accomplishment for the Army Ants,” said Kevin Gillis, chair of the Department of Biomedical, Biological and Chemical Engineering. “Mizzou Engineering is proud to provide support and mentorship to this outstanding group of students.”

Gillis provided mentorship to the group, along with experts from MU Orthopaedics  and the Coulter Biomedical Accelerator.

To get to the global finals, the team competed against 115 teams in the semi-finals. A total of 882 teams from across the world submitted entries. Eleven of the 20 finalists are from the United States, and the Army Ants submission is the only finalist from the Midwest.

The FIRST Innovation Challenge requires teams to identify a real-world problem, design a solution, build a business model and pitch it to judges.

This year, Star Wars: Force for Change has teamed up with FIRST to host the FIRST Global Innovation Awards virtually June 25-30. During the event, the 20 finalists will participate in remote workshops designed to develop knowledge and skill sets. Members of the teams will also receive individualized mentorship from industry experts. Awards will be announced on FIRSTtv in front of a global audience of peers, sponsors and industry leaders at 1:30 central time on Wednesday, June 30.

Gillis has been involved in the Army Ants since it was founded 10 years ago. Mizzou Engineering has been a leading sponsor of the group for the past several years.  Other sponsors include Boeing and 3M.

During that time, Army Ants has enjoyed a number of successes. This year the team also placed first in their division of 30 teams in the FIRST Skills Challenge. The ranking is based on the performance of a robot they developed in 2020 before the FIRST season was suspended.

The team has also won two Engineering Inspiration Awards for STEM outreach activities and recruitment of youth from underrepresented groups. Prior to COVID-19, the group regularly hosted camps for younger students interested in robotics.  This work has continued during COVID with camps held on Zoom. They receive guidance from the Mizzou FIRST Alumni Association, an organization comprised of Mizzou Engineering students who participated in FIRST in high school.

“Participating in FIRST allows high school students to apply what they learn in science and math classes to real-world projects,” Gillis said. “They’re then able to share that knowledge and get younger students excited about STEM. Then, when they’re in college, they become mentors to the high schoolers. It’s an effective educational pipeline that serves all students well.”