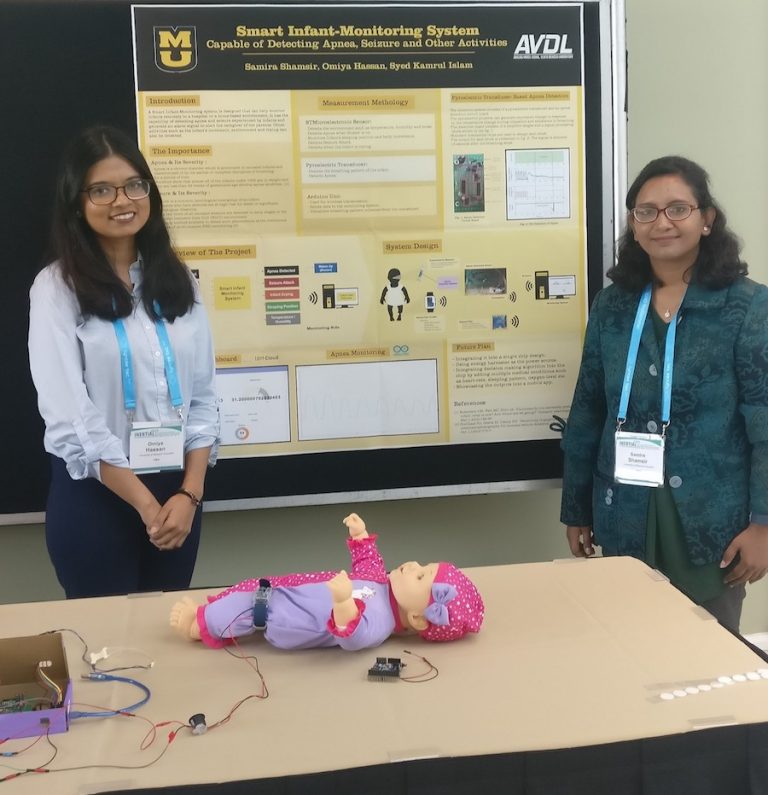 Omiya Hassan and Samira Shamsir took home the top prize in the student contest at the IEEE International Symposium on Inertial Sensors and Systems for their project, “Smart Infant Monitoring System Capable of Detecting Apnea, Seizure and Other Activities.”

“I am very happy to receive this prestigious award as I have been working on this project for several years,” Shamsir said of the fellowship. “It is really a great honor for me of being one of the three recipients around the world who received the award this year from the IEEE Instrumentation and Measurement Society.”

The duo created a prototype sensor system that can detect when a person — and particularly infants — has breathing problems in their sleep typically caused by apnea, seizures or other abnormalities that affect the respiratory system. In the infant-focused prototype, the device both wirelessly transmits a signal to alert a primary caregiver or doctor and triggers a vibrating pulse in a device attached to the child’s toe in an attempt to wake them.

The original focus of the research focused on patients in neonatal intensive care units.

“We presented our prototype at the conference, and they wanted to see our whole chip design, so we got really good feedback. People wanted to see the future of this project,” Hassan said.

Going forward, Hassan and Shamsir said the focus will be on continuing to improve the device, both by making it smaller and improving the signal. Additionally, they plan to explore the possibility of tweaking the device for commercial, in-home use rather than just for NICUs or other medical facilities.

At the end of the fellowship, Shamsir will present an improved prototype and publish her findings in the IEEE Instrumentation and Measurement journal.

“People came to us and said they were interested because apnea is a very common disease, and one of the visitors suffered from it,” Hassan explained. “It showed us that we’re doing something good, something that can benefit humanity.”