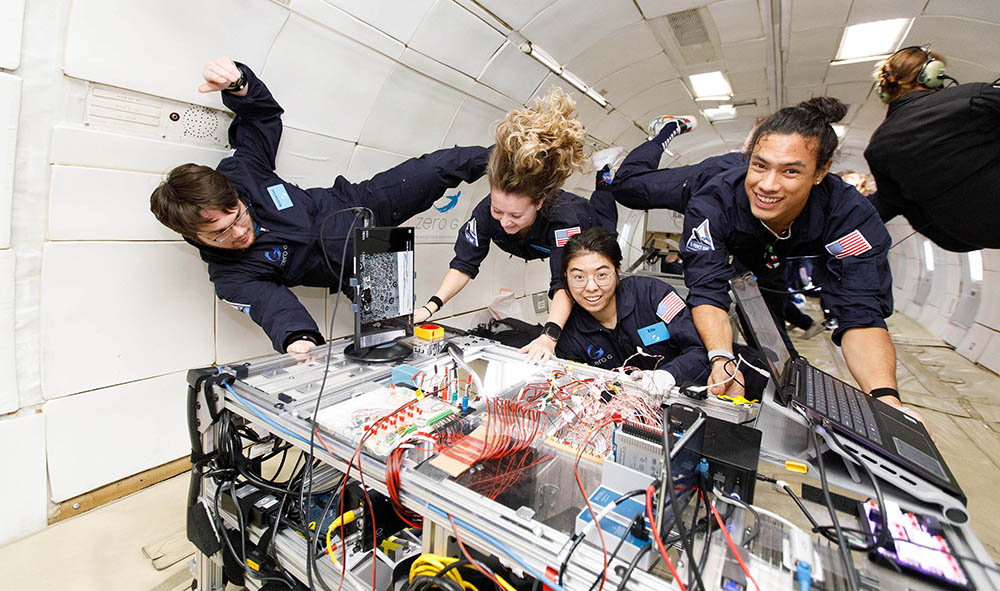 Floating in place. Levitation. Space paralysis. Those were some of the ways students described existing in a zero-gravity environment following their November trip to G-FORCE ONE in Florida.

This was the third year in a row Mizzou Engineers have visited G-FORCE ONE, a modified Boeing 727 that takes passengers on parabolic flights in gravity-free conditions. It’s part of ongoing research that Professor Chung-Lung Chen is conducting to in hopes of developing technologies to harvest water on spacecraft. The research could have significant impacts on the future of space travel.

But first, more about that gravity-free feeling.

Of course, gravity is the force that grounds us. Without it, objects — and people — are essentially weightless. For some, including senior Nathaniel Grindstaff, it can come with physical sensations.

“It’s tiring,” he said. “You’re essentially going from weighing nothing to weighing double.”

Junior Abigail Penfield expected to feel queasy but instead had fun doing flips and turns in the air. “I found it calming and peaceful,” she said. 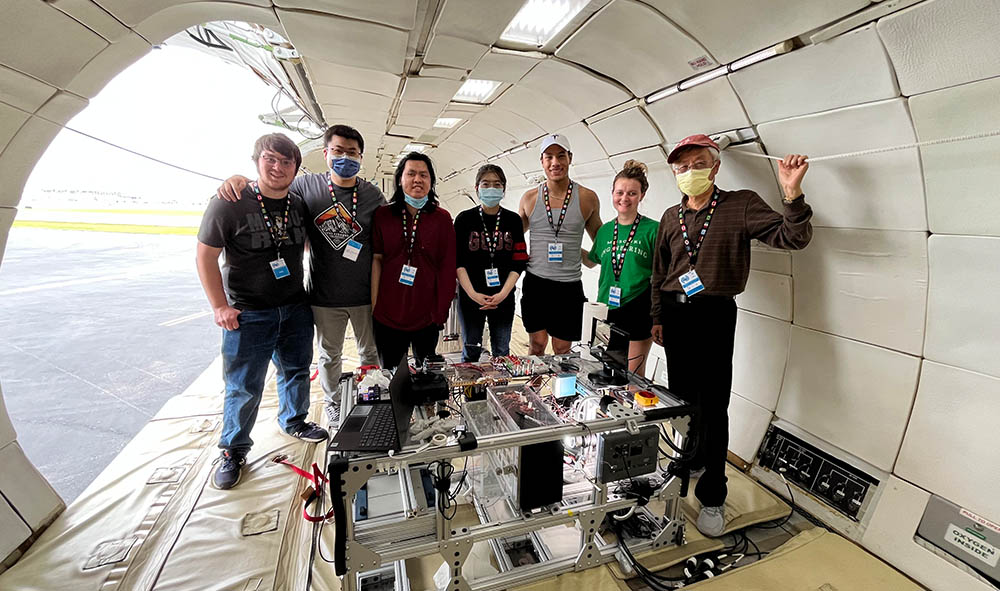 Students didn’t have a lot of time to get acclimated to the environment before investigating the so-called electrowetting phase-change technology Chen has developed. Electrowetting is a technique that makes a surface wet. Students had about 20 seconds of zero-gravity conditions each parabola to test electrowetting and collect data to see how they could better control water droplets.

During this particular trip, the team investigated condensation dynamics and heat transfer performance.

Ultimately, the goals are to  provide  better thermal management of spacecraft and give astronauts more control over limited moisture found on board space stations efficiently.

“There are a lot of applications,” said Robin Pham, a PhD student who has been on the trip all three years. “It essentially gives us control of water recycling and collection.”

Not only could that water keep astronauts hydrated, it could also be used to cool computational devices and instruments on board.

This year’s trip to G-FORCE ONE was a little more challenging than years’ past, said Run “Elle” Yan, a post-doctoral fellow who has been with the group since the first trip. The group’s flights were rescheduled to early morning hours, which didn’t give the team much time to prepare in advance.

“But the undergraduate students helped a lot and did a very good job at adapting and working together,” Yan said. “They really helped and came up with some good solutions, so it was still a very meaningful experience.”

This was Chen’s first time to travel to G-FORCE ONE with the student team. He didn’t participate in the actual flights but was able to see first-hand just what goes into problem solving in zero-gravity conditions.

“They really had to help each other with complicated tasks,” he said. “It was a good experience because in the real world, things aren’t as controlled as in the lab, where everything is under control. I gained an appreciation for how many details they have to know and work through on the spot in a compressed amount of time.”

Sheng Wang, assistant research professor, said that the team is now finalizing data collected from the flight to present to NASA officials The group also plans to propose future funding for additional trips to G-FORCE ONE.

The trip also has Penfield and Polanco Pino now thinking about graduate school. Penfield had been eyeing of a career in commercial space flight but said the research has her considering a future in bioastronautics with a goal of making space comfortable and accessible to all.

And Polanco Pino planned to pursue a career in educational diversity and inclusivity but said the trips have kept him passionate about the technical side of engineering. Academia, he said, would let him combine his interest in both education and research.

Opening new opportunities for students is one of the goals of the trip, Chen said.

“This is an educational experience,” he said. “If we can get students excited about research and about graduate school, it will benefit everyone, especially as space exploration becomes more of a reality.”

Chen said he appreciates the continuous support from NASA program manager Earl Adams and the Missouri Space Grant Consortium (MOSGC) to make the weightless flight campaign happen, as well as  faculty and staff in the College of Engineering.