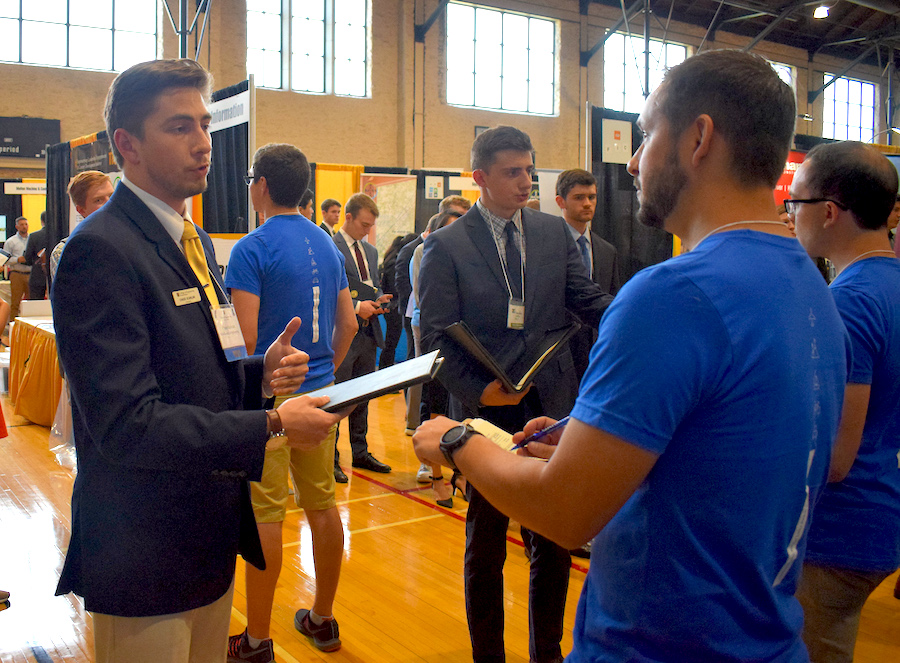 Chase Scanlan (left), a fifth year Mechanical & Aerospace Engineering student, came ready to talk to recruiters and land a full-time job for when he graduates in December.

The College of Engineering held its annual Fall Career Fair on Tuesday afternoon at the MizzouRec Complex, which was filled with more than 200 employers ready to recruit MU engineers to their teams.

More than 1,000 students eagerly waited in line for industry icons such as Garmin, Computech and Melton Machine & Control Company.

Chase Scanlan, a Mechanical & Aerospace Engineering senior, came ready to talk to recruiters and land a full-time job for when he graduates in December. Scanlan is a career fair veteran. This was his eighth, and having four previous internships under his belt, he walked in confidently and with a plan.

“Repetition for effect,” he said. “If they see you enough, they might hire you.”

He already applied online to the open positions at Garmin and Honeywell, but he hoped to further communicate with recruiters in person at the fair. Scanlan prepared even further by attending the information sessions for each and the Reverse Career Fair the day before. Both of these, he said, helped him establish connections with the companies.

“You can take that information, do more research and come back. Then it’s not a first impression, it’s a continuation of the relationship with the recruiter,” he said. “All of my jobs, I like to say, I’ve gotten by just bothering people incessantly.”

And that persistence paid off with Scanlan scoring an interview with Honeywell that day. For him, confidence and determination is key. Scanlan wants to stand out and be remembered by employers.

“These people are seeing hundreds, if not thousands, of applications. You can’t let them stumble upon you. You really have to be like, ‘No, I’m the one you’re hiring,’” he said.

There’s a reason why he’s attended eight career fairs: The exposure is invaluable.

Even for those students not looking for full-time employment or internships, Scanlan advises them to attend to begin the networking process.

“There’s never a situation in which going to the Career Fair is going to impede your ability to get a job,” he said. “And particularly because these companies typically send the same recruiters year in and year out, I was recognized by multiple recruiters. So if nothing else, even if you don’t get it this year, you can always help build that rapport.”

It’s events like the Career Fair that make Scanlan feel like MU Engineering has his back. The College is giving students a world class education and helping them get employed.

“It shows they actually care that students not only get a job, but that they get a job that they want and enjoy,” he said. “They get the opportunity to have more choice in their first job offer.”