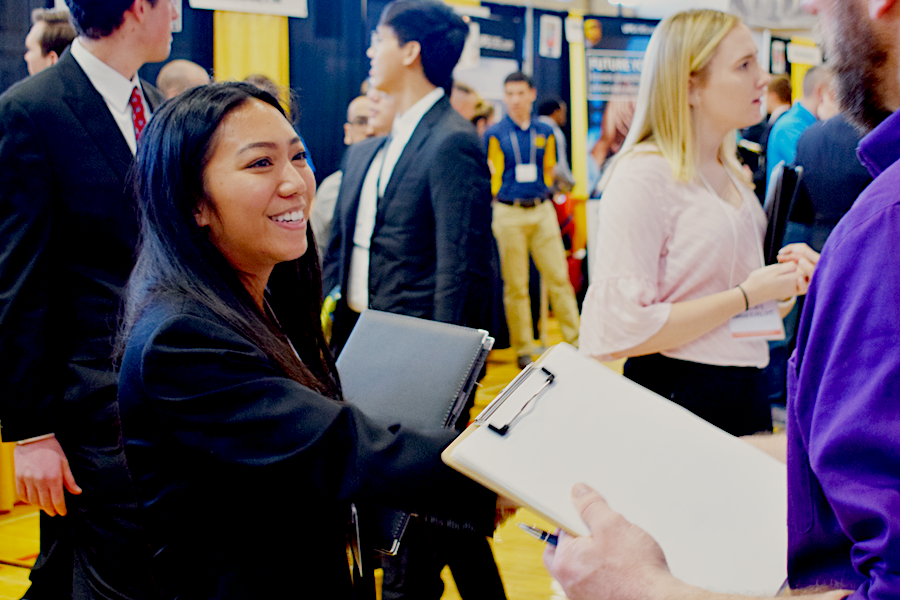 Celestene Sebag, a junior bioengineering major, was at the Career Fair to get a summer internship in the water quality sector.

Mizzou Engineering hosted its annual spring career fair Tuesday with more than 150 employers registered to recruit students for internships and full-time employment. Nearly 700 students navigated the aisles of booths at the MizzouRec Complex that included big name companies such as 3M and Boeing.

Celestene Sebag, a junior bioengineering major, was there on a mission to get a summer internship in the water quality sector. While this was her third career fair, Sebag said she was slightly nervous. She switched her focus to bioenvironmental engineering in the second semester of her sophomore year, which left her less time to find an internship.

“I’m really passionate about bioenvironmental engineering, so I think that will help as I talk to recruiters,” Sebag said.

Sebag visited four companies at the fair: the Missouri Department of Natural Resources, Klingner & Associates, Mead & Hunt and HDR. Before approaching any representatives, Sebag reviewed the notes she had taken about the company.

“I looked at the company list, selected those I was most interested in speaking with, and then searched their website to see if they did have internship openings,” Sebag said.

Sebag was looking for companies that had opportunities for field-work and the ability to develop her technical skills. She asked representatives what their work environments were like.

“When I heard the project manager from HDR, she was talking a lot about how she works in teams. I really like that and how she has a voice being a leader, and she’s female. That’s really cool. I love to see that,” Sebag said.

Attending the fair was beneficial in more ways than connecting Sebag with companies. It allowed her the opportunity to promote herself and to gain valuable interviewing and networking skills.