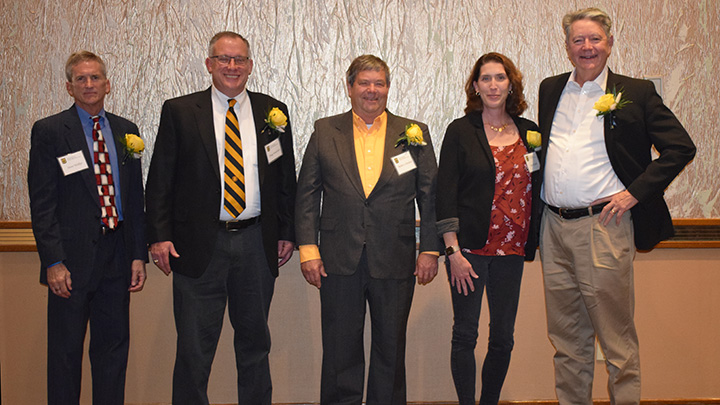 “Our new inductees are outstanding examples of the kind of engineers Mizzou strives to produce, leaders both in their careers and communities,” said Kevin Gillis, professor and chair of the Department of Biomedical, Biological and Chemical Engineering. “We’re excited to have them join the ranks of our Academy of Distinguished Alumni.”

The Academy of Distinguished Alumni aims to honor chemical engineering graduates from the University of Missouri who are outstanding in their field, leaders in community affairs and worth of emulation. The first banquet recognizing academy members was held in October 2013.

Doug Distelrath currently serves as a procurement manager at CRB in St. Louis, where he supports projects in biotechnology, pharmaceutical and food and beverage industries. After college, he served as an Industrial Hygiene Office in the U.S. Navy before working for Boeing and Emerson. Distelrath has been a member of the Mizzou Chemical Engineering Industrial Advisory Board since 2008 and is a Captain in the U.S. Navy Reserve assigned to the Navy Medical Forces Support Command in San Antonio, Texas.

Gordon Hill, who earned BS degrees in chemical and mechanical and aerospace engineering from Mizzou, is the president and general manager of Pacific Forge, Inc., a leading aerospace forging company. In his career, he also held executive positions with Dart Aerospace, Potters Industries and ARCO Chemical Company.

Lee Marshall serves as vice president of research and development information security and global innovation center management for Proctor & Gamble, where he has worked since he graduated from Mizzou in 1981. In his current role, Marshall is responsible for research and development information security for 7,000-plus employees and 13,000-plus devices.

Robert Schreiber, who graduated from Mizzou in 1972, founded Schreiber, Yonley & Associates (SYA), an environmental firm with expertise in air, hazardous waste, alternate fuels and cement kilns, in 1985 after years of work at Illinois EPA and the Missouri Department of Natural Resources Air Program. He was a founding member of the Missouri Waster Control Coalition and the Cement Kiln Recycling Coalition and served on the Board of Directors of a number of organizations.

Steve Welker has spent over 30 years across a wide spectrum of companies, including DuPont, Monsanto Chemical, Solutia and Land O’Lakes following graduation from Mizzou in 1984. After a year-long fellowship in the Distinguished Careers Institute at Stanford University in 2019, Welker now serves as an operating partner at Lewis & Clark Agrifood in St. Louis, a venture capital firm focused on advancing agriculture and food technologies.

Learn more about ways to connect with chemical engineering at Mizzou.