On Sept. 6, the Mizzou Civil & Environmental Engineering Department inducted the newest members into its renowned Academy of Distinguished Alumni.

The Civil Engineering Academy was established in 1998 by the MU Department of Civil and Environmental Engineering and an active group of civil engineering alumni.

The purpose of the Academy is to honor outstanding graduates and distinguished friends of the University of Missouri Department of Civil and Environmental Engineering. Election to the Academy recognizes outstanding achievement, excellence and leadership in engineering and civic affairs.

The bios of each recipient can be found below: 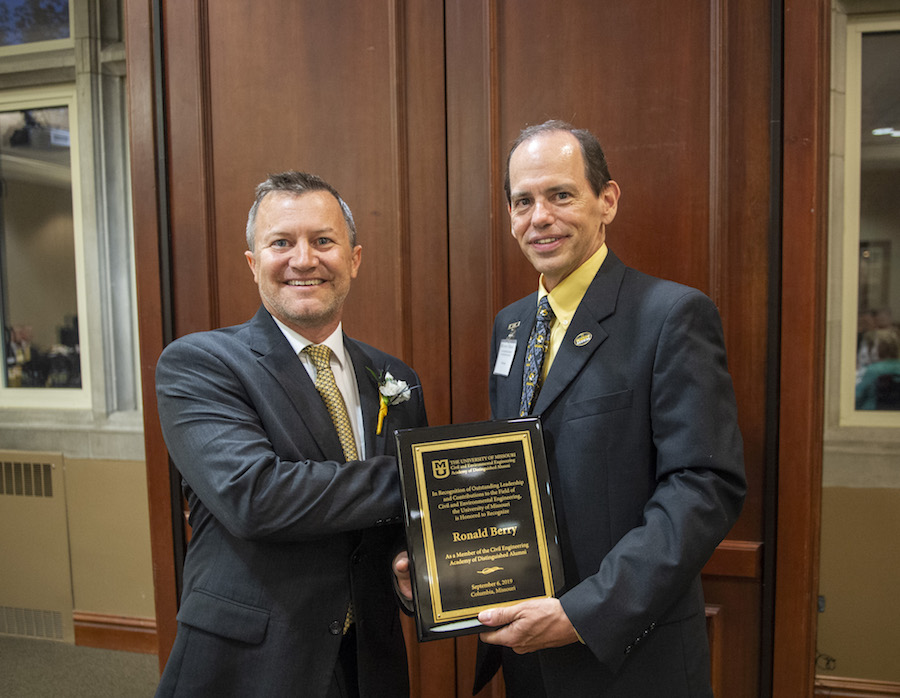 Ronald Berry is currently the general director – Structures for BNSF Railway Company, where he leads the engineering team responsible for all aspects of the Class I railroad’s structures asset management program, including safety, design, construction, inspection, maintenance and operations. He has more than 23 years of experience in the railroad bridge engineering industry, including 18 years with BNSF.

Ronald is the Chairman of AREMA Committee 15 – Steel Structures, serves on the Association of American Railroad’s Bridge Technical Advisory Group, is a member of the National Steel Bridge Alliance Technical Committee and holds a BS CiE and an MS CiE in Civil Engineering from the University of Missouri. He is a registered Professional Engineer in Missouri, Montana and British Columbia. 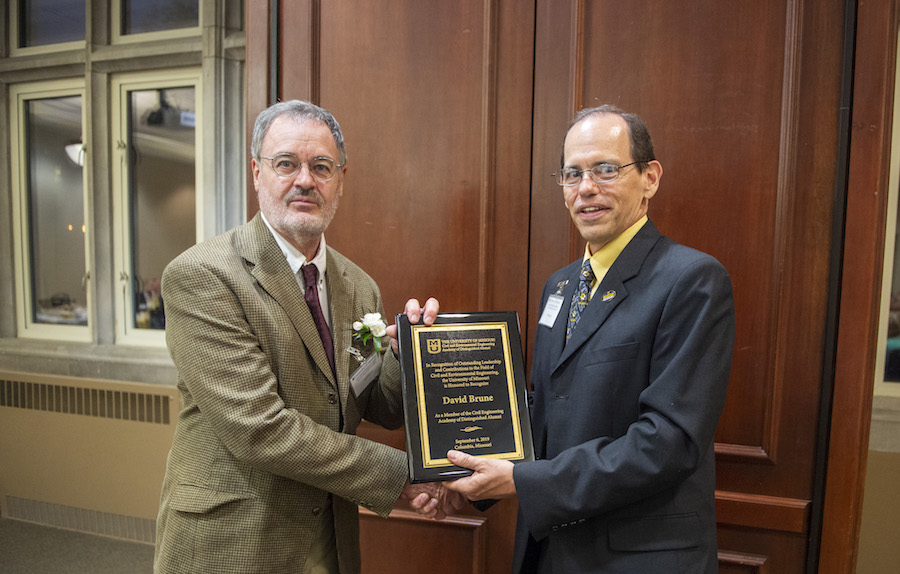 Dr. David E. Brune is a professor of bioprocess and bioenergy engineering within the Division of Food Systems and Bioengineeing at the University of Missouri. Previously he served as professor and endowed chair of Natural Resource Engineering at Clemson University in South Carolina. David is known for his expertise in aquaculture engineering and wastewater treatment system design. He has been involved in aquacultural engineering for more than 30 years, conducting research in agriculture and aquaculture waste treatment and the development of integrated water use systems. He is involved in research related to large-scale microalgae culture for aquaculture, biofuels and bioproducts, as well as for environmental remediation. He has served as primary investigator in projects leading to patented systems for aquatic animal production. David has published more than 60 technical papers and has made more than 100 technical presentations, and he has served as technical advisor to a number of committees both national and international. For his work in aquaculture and microalgae bioproduction, David was presented the Outstanding Paper Award by the International Aquacultural Engineering Society, the Distinguished Service Award from the U.S. Chapter of the World Aquaculture Society, the Outstanding Achievement Award presented by the Clemson Board of Trustees and, most recently, Clemson University’s Godley-Snell Award for Excellence in Agricultural Research. His current research is focused on bioenergy production, aquaculture process design, wastewater treatment and agricultural water quality issues. 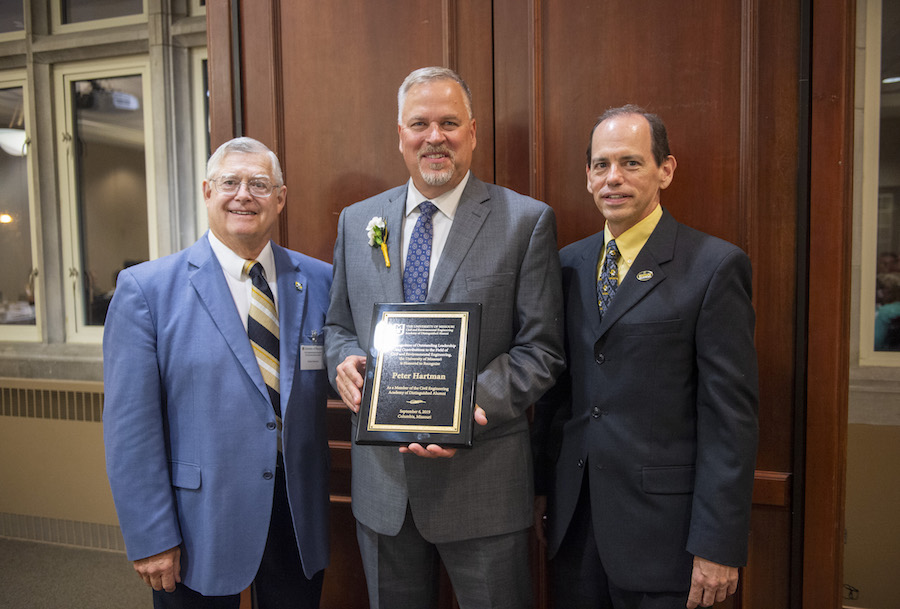 On April 1, 2007, Peter J. Hartman became division administrator in Idaho. He directs a multi-disciplinary staff which is responsible for administering the Federal Aid Highway Program in Idaho. He provides guidance and direction to state officials in the identification of surface transportation needs and related priorities, which, when implemented, carry out state and national transportation goals.

Prior to becoming division administrator, he served for five years as ssistant division administrator in Nebraska, during which he led a national review of local project administration. Pete also served for four years as engineering team leader in the Illinois Division. In addition to leading a team of engineers in administering the Federal Aid Highway Program, he led several internal and external office reviews. Pete also worked for three years as a highway engineer in the Headquarters Office of Highway Safety. He is an alumnus of the Highway Engineer Training Program, having joined the Federal Highway Administration in 1988.

Pete is a University of Missouri graduate and dad to three boys — Kyle, Andrew and Nathan — and husband to the beautiful Heidi Hartman. He was an active adult Scout for 16 years and serves in several capacities with his church. He enjoys gardening, golf, cornhole and cooking. 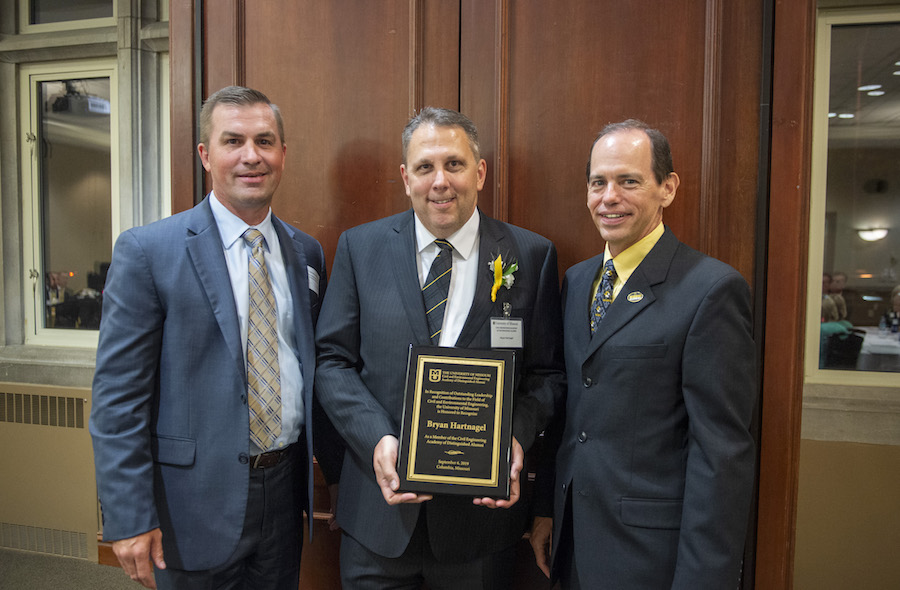 Dr. Bryan Hartnagel joined the staff of the Missouri Department of Transportation in June 2002. He has held the position of assistant state bridge engineer since April 2019. In this position, he is in charge of all aspects of the Statewide Transportation Improvement Program (STIP) delivery.

Bryan holds a Bachelor of Science (1989), a Master of Science (1993) and a Doctor of Philosophy (1997) in Civil Engineering from the University of Missouri. Prior to joining MoDOT, Dr. Hartnagel held the positions of research assistant professor at the University of Missouri and assistant professor at Colorado State University. While at these positions, Bryan taught courses in statics, strength of materials, structural analysis and steel design. His doctoral research was on inelastic design of steel girder bridges.

Bryan is a registered Professional Engineer in the states of Missouri and Colorado. 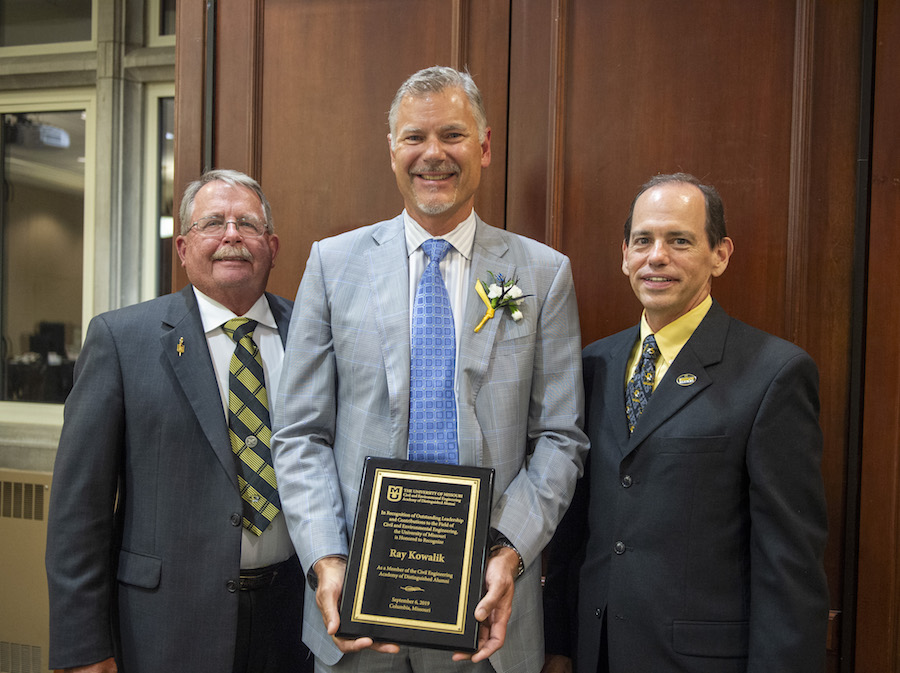 Ray Kowalik leads 7,000 employees whose work generates annual revenue of $3.5 billion. Burns & McDonnell ranks No. 9 on the list of largest engineering, architecture and construction firms according to Engineering News-Record and has been on Fortune’s List of 100 Best Companies to Work For nine times.

Ray joined the firm in 1987, became an officer in 2001 and was promoted to president of the Energy Group in 2007. He joined the Board of Directors in 2009 and, in 2015, became the firm’s executive vice president and president of global practices. He became chairman and CEO in January 2017.

Out of the office, Ray invests time and energy into organizations that support education, health and economic development. He serves as the board chair for United Way of Greater Kansas City. Ray is also on the Board of Directors for the Kansas City Area Development Council, Union Station and Notre Dame de Sion. He is on the executive committee of the Civic Council of Greater Kansas City, as well as the Kansas City Market Board of U.S. Bank. Ray is also a member of the Dean’s Engineering Advisory Council for the College of Engineering at the University of Missouri.

Ray earned his bachelor’s and master’s degrees in civil engineering from the University of Missouri. He and his wife, Jill, have a daughter who is an engineering graduate of MU. They live in Lee’s Summit, Mo. 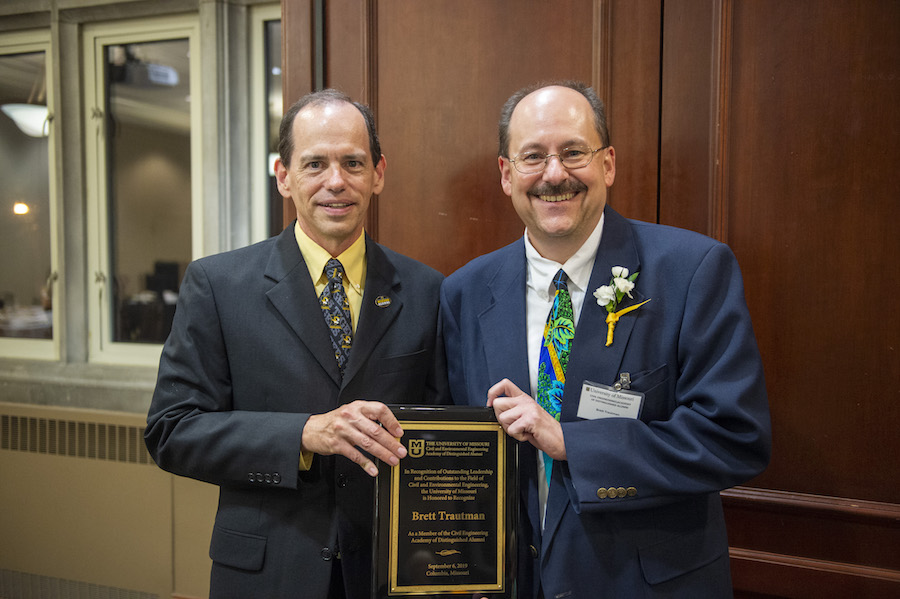 Brett Trautman graduated from the University of Missouri in 1989 with a Bachelor of Science degree in Civil Engineering and is a registered Professional Engineer in the state of Missouri. He has worked for MoDOT for more than 29 years. He began his career in 1990 as a materials inspector working in the Materials Section of the Central District. In 1996, he joined the Construction and Materials Division as a field materials engineer. In 2013, Brett was promoted to physical laboratory director where he currently oversees the testing of concrete, bituminous mixtures, aggregates, rebar and other materials utilized on MoDOT projects.

In addition, Brett served as the chair of the National Concrete Consortium from 2009 to 2013. In 2015, he became chair of the National Road Research Alliance – Rigid Team. He currently represents Missouri as the voting member on the American Association of State Highway and Transportation Officials Committee on Pavements and Materials, serving on ten different technical subcommittees. Brett currently serves as the vice-chair for Technical Subcommittee 3a – Hydraulic Cement and Lime.

Brett is a native of the St. Louis area. He and his wife, Kim, have been married for 29 years and have three sons, Joshua, Dillon, and Cole, and one grandson, Dakota. Brett enjoys reading, listening to music, and watching old, classic movies.