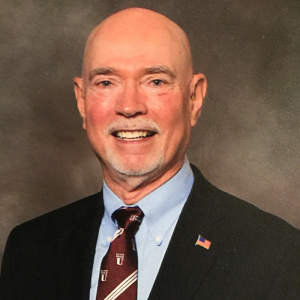 While flying a reconnaissance mission in 1967, John Clark — an Air Force captain at the time — was shot down over North Vietnam, surviving six years as a prisoner of Hỏa Lò, later known as the “Hanoi Hilton.” Upon his repatriation, the former ROTC Cadet Corps commander returned to Mizzou for his MBA before returning to flying duty.  In 1980 he joined the Missouri Air National Guard, retiring as a colonel in 1992.

He is the recipient of numerous awards, including the Silver Star, two Legions of Merit, the Distinguished Flying Cross and two Purple Hearts, and has readily shared his story — the trauma, subsequent battle with PTSD, and the faith that sustained him — with generations of MU students and others. His experiences have granted many with unique, personal insights into the realities of war, and his advocacy on behalf of his fellow veterans continues to this day.

In 1994, he was appointed co-chair of the USS Columbia Submarine Committee, responsible for christening and commissioning events on behalf of the newly built submarine and its crew. Thanks to his efforts, Mizzou’s Naval ROTC unit continues to host annual visits from the crew’s members, with many choosing to become Tigers themselves.

Clark is the son of two Mizzou alumni and a native of Columbia, Missouri, where he lives with his wife, Anne. He is a life member of the Mizzou Alumni Association.

“When I was lost, I sought God and was found. I have always valued truth, and I believe in passing down credit for unit achievements; if you selflessly take care of those within your unit, they will ensure you are cared for as well.”