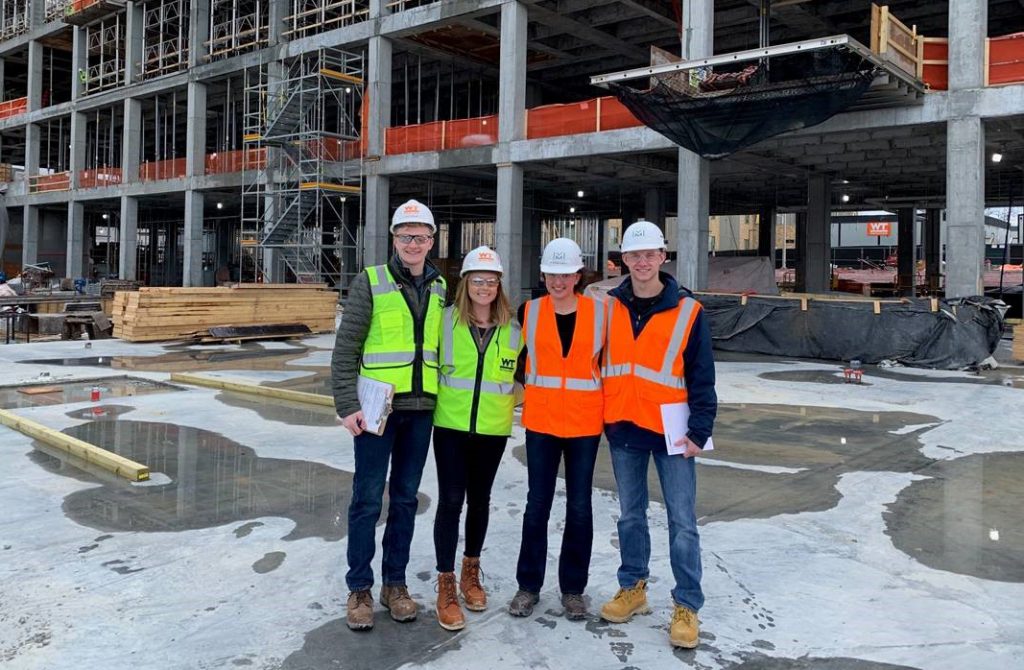 Four Mizzou Engineering students are currently working as interns on the construction site of the NextGen Precision Health Institute located near University Hospital on the MU campus. The students say their internships provide an opportunity to put into practice what they have learned in the classroom, or give them a chance to learn new skills that will help them in their careers. Bryan McClure and Madie Churchill are both seniors majoring in civil engineering in the Department of Civil and Environmental Engineering and interning for the Whiting-Turner Contracting Company, which is the construction manager for the NextGen facility. Sophomore Morgan Hanley and junior Jacob Reed, both majoring in mechanical engineering in the Department of Mechanical and Aerospace Engineering, are interning this semester for Murphy Company Mechanical Contractors.

Justin Zeh, the senior superintendent for Whiting-Turner, said his company provides real internship experiences involving real tasks related to the construction project, such as assisting project managers and superintendents with daily tasks, including administrative duties, requests for information, submittals, quality control and subcontractor coordination. Zeh said Whiting-Turner started its recruitment efforts at Mizzou during the NextGen project with the intention of finding engineering graduates to work full-time at the company as well as part-time interns. He said the company recruits all disciplines of engineering if they have an interest in the construction field, and that most of their interns end up working full-time for Whiting-Turner. 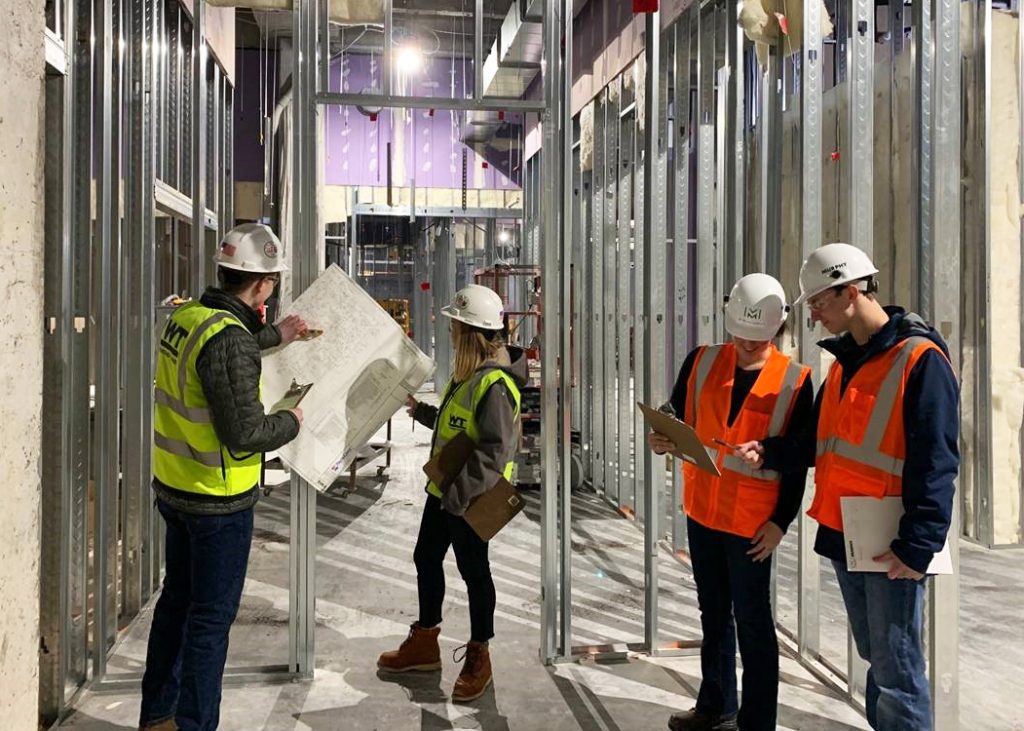 (l-r) Bryan McClure, Madie Churchill, Morgan Hanley and Jacob Reed demonstrate the type of work they perform as interns on the NextGen site.

Bryan McClure was one of the first interns hired by Whiting-Turner to work at the NextGen construction site, and he has accepted a full-time job with the company after graduation. McClure said he became interested in the project when Zeh spoke to a meeting of the American Society of Civil Engineers last May. He said he wanted to do an internship during his senior year to gain experience in the construction field, and the fact he secured a full-time job made it a “two-for-one deal.”

Morgan Hanley said she heard about the NextGen project in various engineering classes, where she learned the importance of the project to the university and the state as well as the cutting-edge research that will be conducted when the facility goes online in 2021. Hanley, who is studying chemical engineering in the Biomedical, Biological and Chemical Engineering Department, said she became aware of the opportunity to work as an intern for Murphy Mechanical at the Mizzou Engineering Career Fair. Hanley said she spends half of her days in class and the other half at the construction site. She said the intern experience allows her to see how the math and physics she studies in class applies to real-world solutions at the construction site. She also said she enjoys the collaboration she has witnessed at the site and the interpersonal connections she has made while working as an intern. Hanley said she reviews architectural drawings and submittals and tracks progress at the site, in addition to other duties. This is her first experience working on a construction site, and she said everything has been “eye-opening.”

This summer, a fifth Mizzou Engineering student will work as an intern at the NextGen site. Jason Myers, the senior project manager for PayneCrest Electrical and Communications, said Barry Kuebler, a junior majoring in electrical engineering in the Department of Electrical Engineering and Computer Science, will join a local union and work in the field with tools for 11 weeks beginning at the end of May.

In addition to the Mizzou Engineering interns, there are 51 project personnel currently working at the NextGen site who attended one of the four UM System universities.