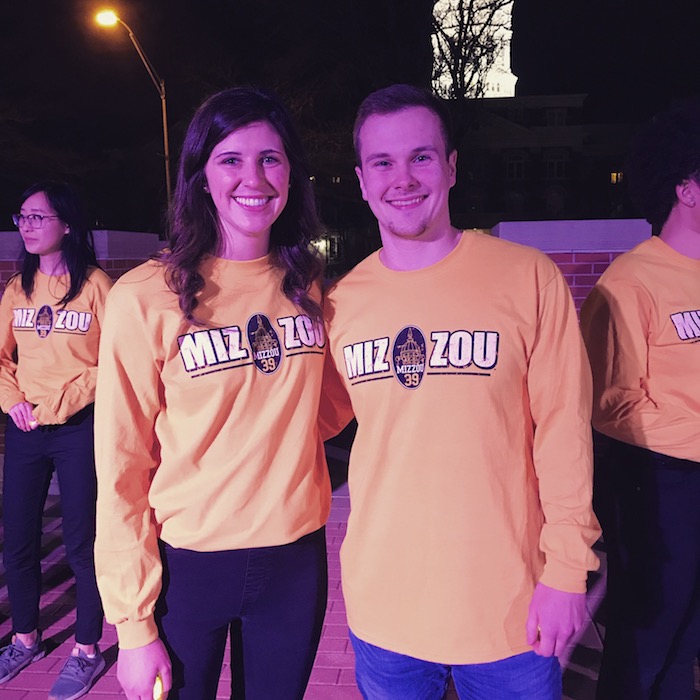 Julia Wopata and Trent Wideman were selected as Mizzou ’39 recipients in honor of “their academic achievement, leadership and service to Mizzou and the community.”

Mizzou ’39 recipients are among the best and brightest seniors MU has to offer. These are students equipped with the skills to lead on immediately after graduation and the resume to match. Two members of this year’s class are Mizzou Engineering students — Trent Wideman and Julia Wopata.

One of the College’s most important goals is to educate future generations of engineering leaders, and Wideman and Wopata are examples of the goal coming to fruition. Mizzou ’39, which unveiled its most recent class Tuesday on Traditions Plaza, chooses 39 seniors from across campus for “their academic achievement, leadership and service to Mizzou and the community.”

Wideman is an Industrial Engineering major from Farmington, Mo. He was recognized for academic performance and his service in a wide array of areas, including serving as 2018 Homecoming Tri-Director, 2017 Homecoming Steering Committee, being a member of Delta Tau Delta and St. Pat’s Board, serving as an Engineering Ambassador, and participating in Mizzou Alternative Breaks.

“For me, Mizzou is home. My parents and my sister both went here,” Wideman said. “Getting to be part of a university that my family went to and getting to do the things that I’ve done has been a great opportunity.”

Wopata, a Kansas City native and Computer Science major, excels in the classroom and as the president of the Missouri Students Association. Her activities and honors also include: Kappa Alpha Theta, Veritas Campus Ministry and serving as an undergraduate member of bioinformatics research team.

“It was a really great honor. You spend your time at Mizzou, and you don’t always stop to think about all the things you’re doing along the way. It was cool to be recognized for the time you commit contributing to Mizzou,” Wopata said.

Each Mizzou ’39 awardee has the opportunity to honor a mentor for their help throughout their collegiate journey. Wopata chose Electrical Engineering and Computer Science Professor Jianlin Cheng. Wideman, meanwhile, chose former MU coordinator of student and alumni programs Aly Friend.

“Aly took a chance on me my sophomore year and put me in a leadership position my junior and senior years. She gave me the opportunity to do the things that I’ve done with Homecoming, and it’s helped me become who I am now,” Wideman said.

Wopata said of Cheng: “I have learned so much being a student in his lab. He is a really great leader, and I learned a lot from the way he lead a team and provided a combination of constructive criticism and a high level of support.”

The accolade serves as a cherry on top of a distinguished collegiate career. It also provides a moment to reflect back on what has made Mizzou such a special place for the recipients, and why they chose to devote so much time and energy to various campus events and organizations.

“I’ve been able to meet people who shaped me into a better person,” Wopata explained. “I think I’ve learned a lot from all of them. Mizzou is great because it fosters this environment of people learning from each other and collaborating and growing.”