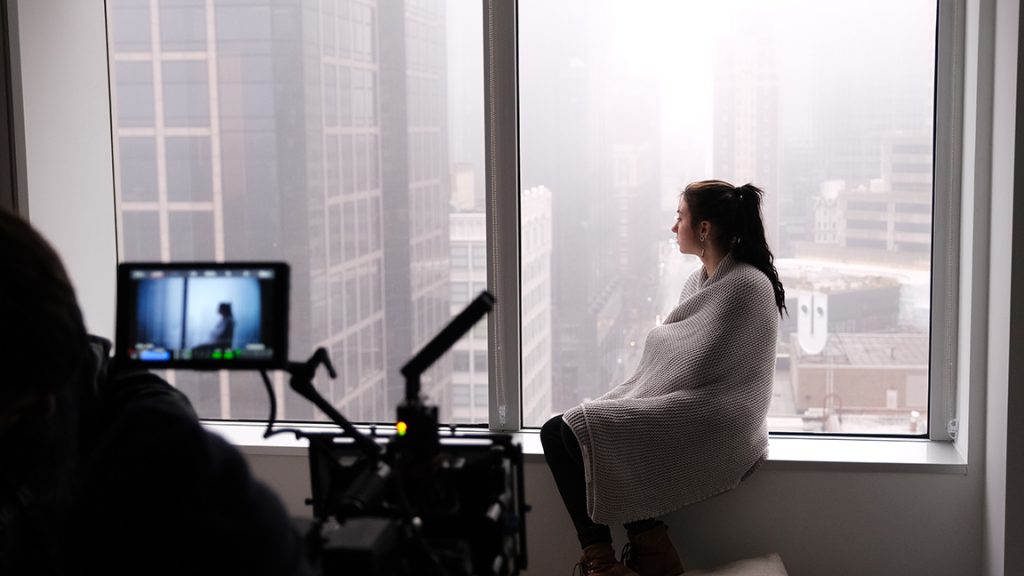 Student Persephone Suits stands in for talent while preparing for a shot against the Kansas City skyline.

Scene: In the not-too-distant future, a digital artist creates a machine that integrates with the biometrically-attached technology imbedded in most of the population—cell phone technology implanted in a person’s arm and Google glasses for one’s eye. Her machine pulls all of the data from these imbedded devices to create art. When the artist’s sister, a software engineer, attends her sister’s art opening, something goes wrong, affecting people who had integrated with the machine—they seem to shut down and become incapacitated. The Chief Magistrate is called in to investigate….

That’s the premise of a television pilot being produced by filmmaker and Assistant Professor of Practice Brian Maurer in the Information Technology program. This semester he’s teaching an independent study called Media Production Practicum: Kansas City, which provides students with hands-on learning, allowing them to engage in an academic way with an industry they want to work in. He and the students spent much of the winter break prior to the start of the spring 2020 semester producing the pilot in Kansas City, Missouri. 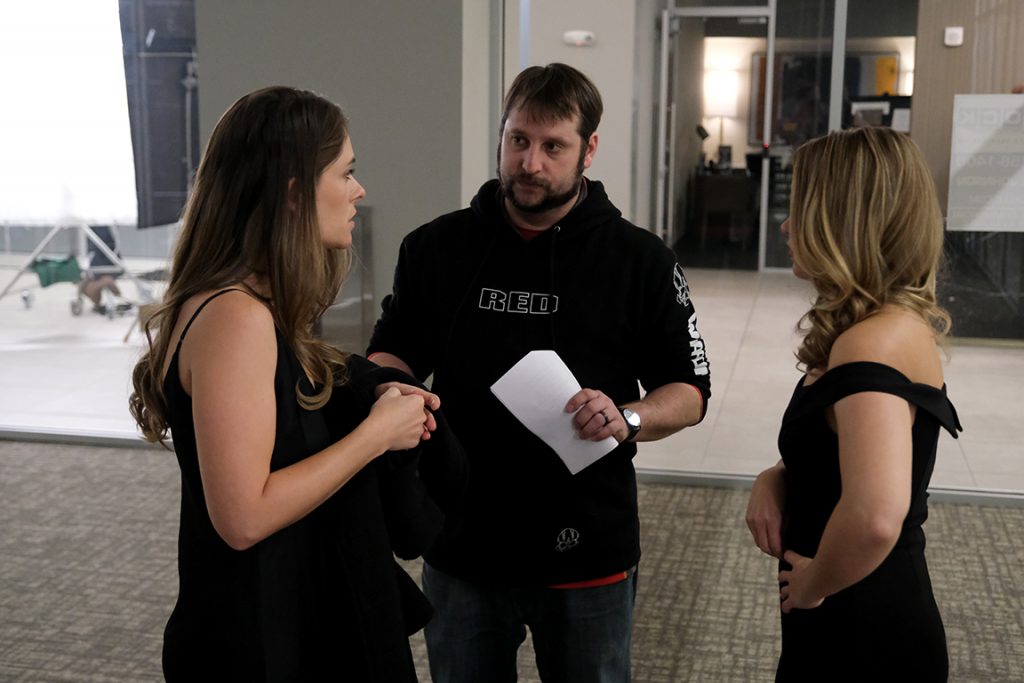 “Being able to facilitate an actual internship with a business that is tied directly to an instructor or engagement inside of the industry is something very unique,” Maurer said. “We don’t have a lot of students who leave the college for a class that is directly tied to the industry they are interested in.”

Maurer says the College of Engineering provided some financial support to see if an MU classroom can be administered in a different city and in a different modality. Students assisted the camera department and engaged with industry professionals to learn hands-on techniques such as lighting, production scheduling and personnel and asset management. He says none of the students are actors but they all served as extras in the production.

Molly Farnam, a senior in the Information Technology Program, says it was the first full-scale media production project she has been involved with. She served as a production assistant for the lighting department. 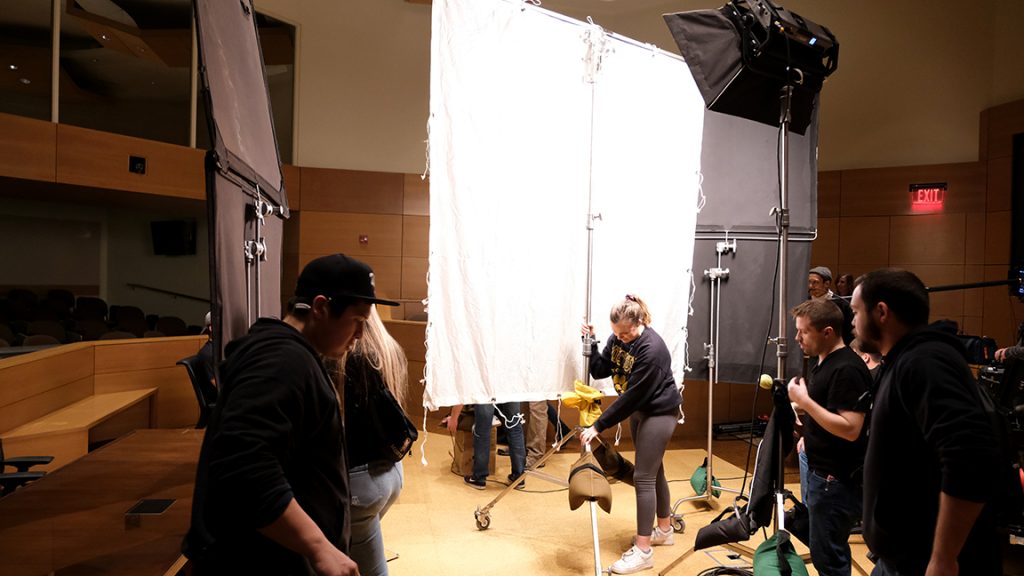 “Brian’s class could only prepare you so much, so most of the learning happened on set,” she said. “I learned things like proper equipment setup, set etiquette and industry practices from the professionals working on set. Most of this stuff is difficult to learn in a classroom and is much easier to learn by performing the task with guidance from industry professionals.”

Farnam says Maurer did an excellent job preparing students for the difficulties they would encounter, such as long hours, but she was surprised by how much fun the experience was for her.

“Although we were all there to do a job, there were always games and jokes that really made the entire experience enjoyable,” she said. “The people were so awesome and are great connections for the future.” 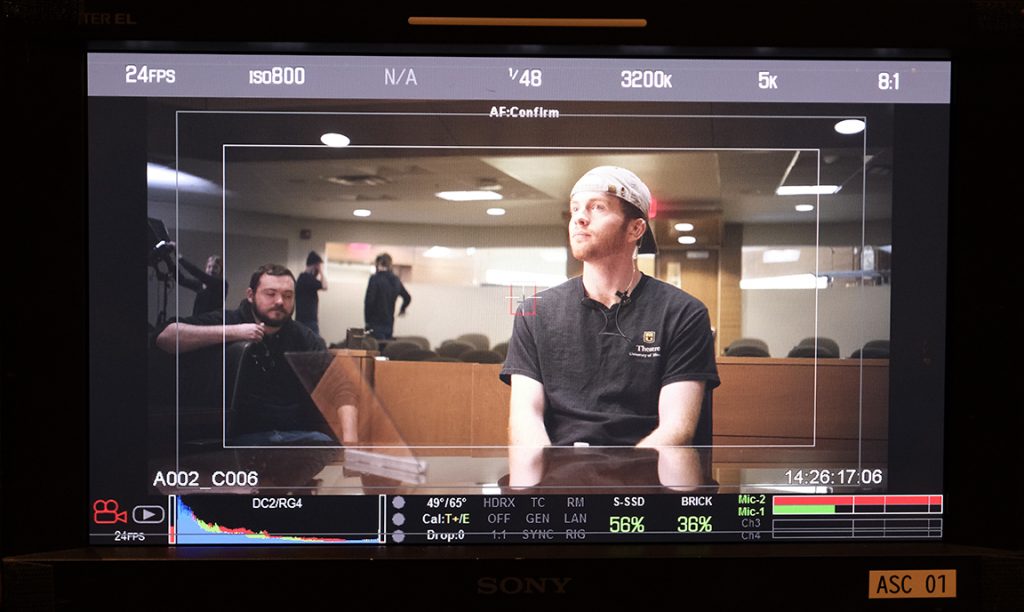 A view through the camera during setup in the courtroom with Patrick McIntosh and Kyle Shearrer (in frame).

Senior Kyle Shearrer, who is majoring in Information Technology and Technical Theatre with a minor in computer science, says it was the first television/film production he has been a part of, although he has been involved in many theatrical productions. He served as a production assistant under the assistant director and the unit production manager.

“I was an elevator operator, an extras wrangler, I set up craft services, I made sure everyone was hydrated and did a hundred other odd jobs,” he said. “On the last day of filming, I got to call a few shots, which was a great experience.”

Shearrer says Maurer’s production class gave him a lot of insights about what happens behind the scenes, such as how expensive a production can be and how every minute counts when the cameras are rolling. He was surprised by how chaotic things became at points during his time in Kansas City but says everyone he talked to said chaos is part of the process.

“Film sets seem like a giant boulder rolling down a hill and everyone is just trying to kick it in the right direction,” he said. “At the same time, most people knew how to handle themselves under pressure and keep a positive attitude. It is an intoxicating energy—you never know what to expect.” 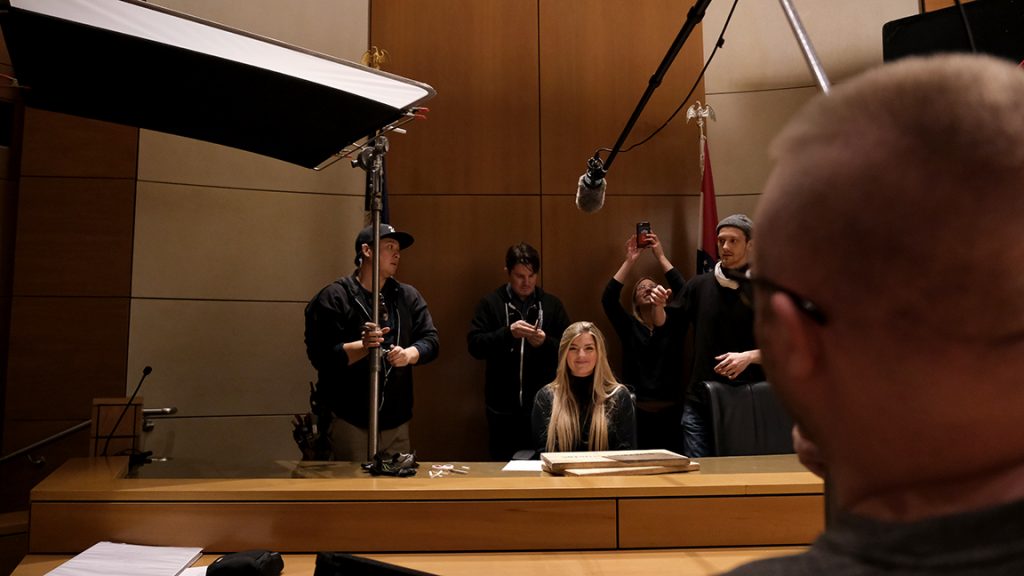 Digital storytelling major Brooke Montgomery, who is minoring in Information Technology, said she has worked on numerous student films and projects, but was interested to see what it was like to work on a professional set and how the various roles in a field production function. She worked as a grip (part of the production team that develops and builds the set) and an electric production assistant who reported to the gaffer (the person in charge of lighting) and the key grip, who is responsible for lighting and rigging.

“My role was extremely hands-on, and as a result I learned multitudes about lighting techniques, set etiquette, lighting and rigging equipment and overall production commonalities,” she said. “This was a fun-filled experience that solidified my desire to continue developing my skills and eventually advance into a career in production.”

Maurer said what they shot was called a concept pilot, which is used to entice investors or production companies to either fund the project or to buy the concept. However, due to financial limitations and complications due to inclement weather, Maurer and his producers decided to turn their footage into a sizzle reel, which he describes as an impactful, visually intriguing, long-form trailer that demonstrates the core elements of the story. 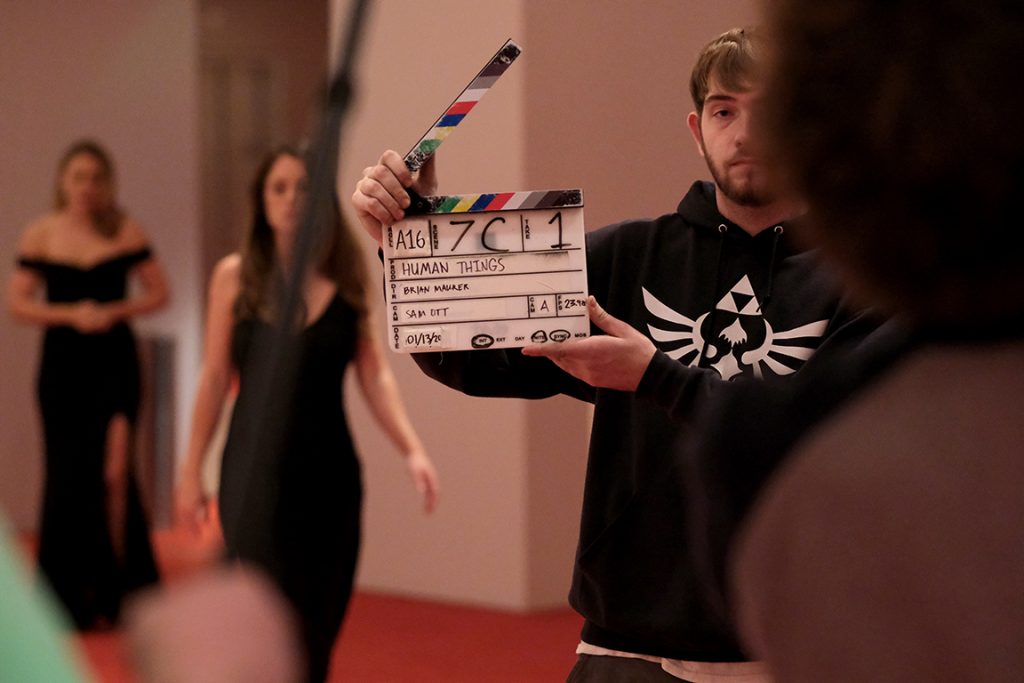 Christian Ethridge prepares to slate a take prior to calling action; Bee Avila and Morgan Bradley walk into the frame.

“Personally, I would like to find an independent investor who is going to throw a couple of million dollars into shooting the project,” he said. His team also has to produce a show bible illustrating what the first season would be about and then write a second episode. Whatever happens, Maurer said he and a couple of his co-producers would like to be showrunners ­– the people who run the show from beginning to end. Maurer’s most recent film, his fourth, was the critically acclaimed In the Wake of Ire. He also has produced about 20 short films.

Molly Farnam said the production had a huge personal impact on her.

“This experience has opened a lot of doors for me in the professional world and given me some great contacts in the industry,” she said. “Most importantly, the production gave me the confidence I need in such a competitive industry. It’s hard work but totally worth the experience and the knowledge you leave with.” Brooke Montgomery, like Farnam and Shearrer, said, if given the opportunity, she would take the course again and recommends it to anyone. 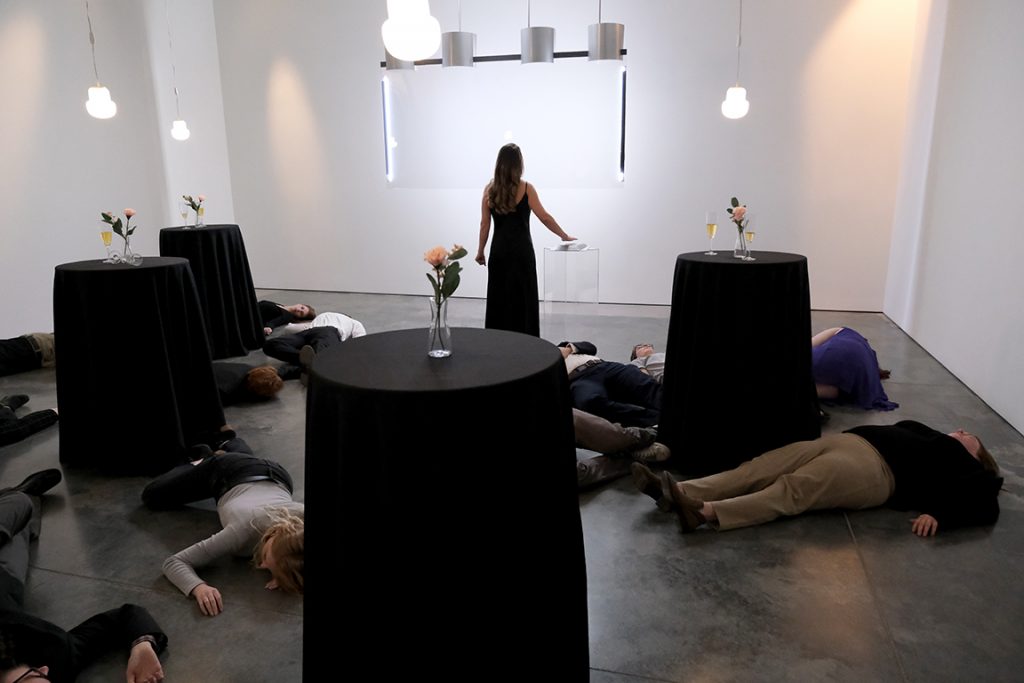 Students, crew, and extras lay on the ground as lead actress Morgan Bradley activates the machine.

“There were incredible friendships formed, mentorships established, and skill sets honed,” she said. “This is the perfect way to test the waters in the production realm.”

Kyle Shearrer agrees the experience has a major impact.

“The nine days we worked on set were some of the most rewarding days of work I’ve done in my life,” he said. “I had nights where I worked a 14-hour day and came home too amped to go to sleep because I was enjoying myself so much. This trip taught me that I love working on a film set and want to try and pursue it as a career.” 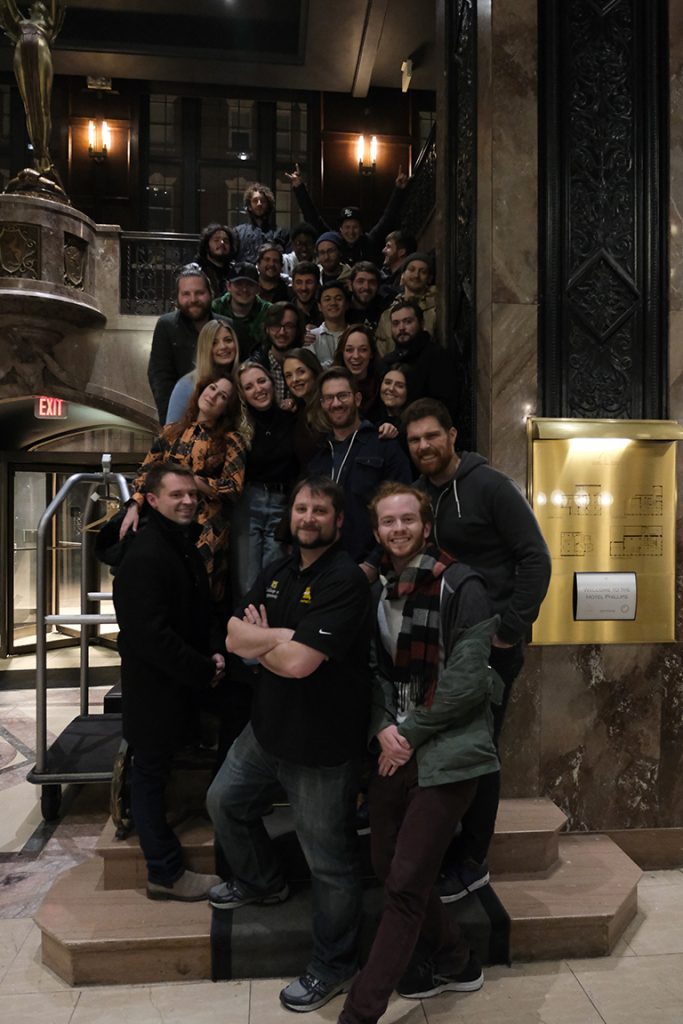 Assistant Professor Brian Maurer, surrounded by the students, and crew of the 2020 Human Things production, on the last night of the shoot.