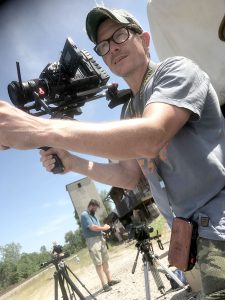 Chip Gubera on set of a the film Lost Treasure of Jesse James. Gubera is now helping a filmmaker explore grief in the digital age.

Technology is changing the way we process grief as those who pass away leave behind social media accounts, text messages and other digital reminders.

“Our loved ones—especially younger loved ones who have passed—are still around digitally,” said Chip Gubera, assistant professor of professional practice in the Information Technology Program. “So how do we deal with the grief when it feels as though someone is still around, when there are all of these digital markers?”

Gubera and filmmaker Desiree Moore will explore the phenomenon in a new feature documentary, Reenactment. The film will follow Moore as she navigates electronic records to reincarnate her deceased partner through a series of reenactments.

“Reenactment observes how the digital realm that defines modern life shapes new ways of grieving,” said Moore, an assistant teaching professor in the College of Arts and Science’s School of Visual Studies. “The goal is to use my personal story as a platform to honor the tapestry of shared experiences that exist all around us.”

The feature-length documentary is new for Moore, who typically works in video art. That’s one reason she recruited Gubera, who has worked on nine feature films, including one documentary nominated for a Mid-American Emmy award.

“I asked him to be the producer because he is a deeply entrenched resident of Mid-Missouri and brings expertise in indie production and steadfast regional connections to the production,” Moore said. “Chip is also well-versed in graphics and audio engineering, which will serve the project when we make it to post-production.”

The feature documentary is one of several film projects Gubera has in the works right now. He and  local filmmaker Adam Boster released a full-length children’s film last month. The Lost Treasure of Jesse James follows the story of a group of kids trying to solve a 100-year-old mystery that has them on the run from treasure hunters. Already, the film is seeing success at film festivals and commercially.

This spring, the two will finish shooting on location for another children’s movie, “Shakespeare’s Mummy.” In this fictional film, a team of youngsters are up against an Egyptian goddess and a pizza oven-turned-portal to the underworld installed at Shakespeare’s Pizza in Columbia. Work on the film began in 2019 but was sidelined by COVID-19.

Gubera uses his film projects to provide opportunities for students to apply what they learn in his digital media design, motion graphics and visual effects courses in the IT Program. In some cases, students can apply to be interns on set, or they can assist on the technical side as digital imaging technicians.

“I practice project-based and experiential learning, so it’s important to couple course content with real-world opportunities,” he said. “This not only gives students experience working with clients, but it also provides professional work experience that will give them an edge in the workforce.”

The work also ensures Gubera stays up-to-date in the industry and can adopt the latest media technologies in his courses.

“All of us in the IT Program try to keep a foot in professional work,” he said. “Students know we are providing a relevant education because we’re also out in the field doing the work.”