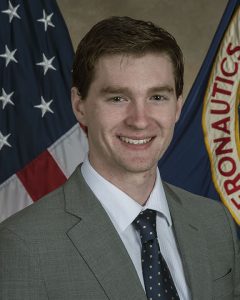 A Mizzou Engineer’s digital fingerprints will be on the Mars Ascent Vehicle when it makes its historic voyage to the Red Planet in 2026. Christopher Whetsel ’19, works at NASA and has been involved in the program both on the software engineering and project management side.

“It’s part of the Mars Sample Return Program and aims to take samples of Martian dirt and return them to earth so they can be studied in labs here,” he said. “We can send instruments to Mars in the rovers, but obviously what we send there is limited. We can do a lot more research and science on the samples back here on Earth.”

No doubt a lot of hands will have been involved by the time the vehicle heads to space, and every step is crucial for ultimate success.

“It’s a very long process and takes a lot of time and a lot of pieces to make it work,” Whetsel said. “The Mars Ascent Vehicle is just a small part. But every part is important because if one part fails, the whole mission could fail.”

Whetsel has a computer science degree from Mizzou Engineering, where he learned the diverse skills he’s putting to use at NASA today.

In-depth software development and operating systems courses gave him technical know-how. In addition to the software part of the ascent vehicle, Whetsel also worked on software for a star tracker. That instrument takes pictures of stars in space, allowing spacecraft to determine their exact orientation.

And his software engineering classes prepared him for his role in the Mars Ascent Vehicle project office, where he currently supports tasks such as scheduling and budgeting.

“At Mizzou, I got exposed to a lot of different kinds of work,” he said. “I got a very high quality engineering degree, and I learned everything I needed to be a successful engineer in the computer science field.”

Whetsel knew he wanted to work in STEM as a kid. But it wasn’t until his sophomore year that he got interested in space. His girlfriend is also a Mizzou Engineering graduate and introduced him to the Mizzou Space Program (MSP).

MSP introduced him to aerospace projects. It gave him the opportunity to assemble his own rocket. He was also able to test his own GPS tracking system by launching it in a weather balloon.

Once he realized he had a love for space, Whetsel set the lofty—but ultimately reachable—goal of working for NASA.

“It’s where everyone in the space industry dreams to work,” he said. “I set the goal to work for NASA because of the amazing things they do. Their past accomplishments and what they’re still doing now. Working in the space industry, especially at NASA, is really cool because they have such large goals. The work they do is to benefit everyone. The benefits they provide can help all of mankind, and that’s the mission.”

To get to NASA, Whetsel made sure he took advantage of everything Mizzou has to offer. He used Mizzou Engineering career services to snag an early internship as a software engineer for a company in Columbia. He joined the engineering fraternity, Sigma Phi Delta. And he studied abroad in Scotland, then snagged a spot in NASA’s Pathways Program. That program allowed him to conduct a co-op for a full semester in Huntsville, AL, and an internship the following summer.

During his senior year, Whetsel attended Mizzou Engineering’s Career Fair, which led to an offer from another prestigious defense company. But then he got the opportunity to work at NASA full time. While the position didn’t pay as much as he could have made elsewhere, “it’s very hard to turn down an offer from NASA,” he said.

And because of Mizzou’s price point, he was able to accept.

“Graduating with no debt empowered me to pursue the career I wanted and not just one that was going to make money to pay off loans,” he said. “I enjoy what I’m doing a lot more than I would have otherwise.”

For others looking to the night sky and pining for a similar career, Whetsel says be patient but persistent. And make sure you’re prepared when opportunity knocks.

For Whetsel, that included taking a variety of courses to gain the skills necessary for diverse tasks required on the job. Specifically, he praised classes from Dale Musser, an associate teaching professor known for giving students hands-on projects, and a robotics course taught by Associate Professor Gui DeSouza.

“Dale Musser was a great professor. I loved his classes and style of teaching,” Whetsel said. “My favorite course was building intelligent robots with Professor DeSouza. I also really enjoyed him as a professor. We got to work with modified robots and robotic arms, which was really cool.”

No doubt those lessons have come in handy at NASA.

“I definitely recommend Mizzou Engineering. It’s got the academics and extracurriculars that can help you supplement your education,” he said. “It was such a good decision. I had the best time. And it definitely prepares you well to work in a real-world engineering environment.”