Jen Larson, the university relations recruiter for Garmin, says the company partners with colleges and universities to find the best talent to work at Garmin.

“I attend career fairs, we do on-campus interviews, we do information sessions, we go into classrooms and do presentations and I take engineers with me on visits,” she said. “I’ve been here over two years and Mizzou is one of my schools, so I’ve spent a lot of time in Lafferre Hall. Obviously, we want to hire as many Tigers as we possibly can.”

Another way Garmin recruits engineering students is through the company’s ambassador program. Interns are invited to apply for the program after completing their internships. 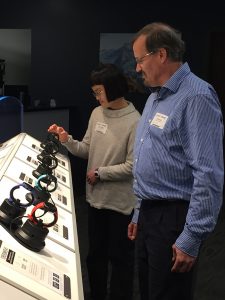 “People go back to school and talk about Garmin and tell others about their experience, because if you hear from a classmate about a good experience they’ve had, you are more likely to go check out that company or apply,” Larson said.

Isaac Lagermann, a junior majoring in electrical engineering with a minor in computer science, served as a Garmin Ambassador last semester and will do so again this semester. The Cedar Hill, Missouri native spent last summer as a design engineer intern in the aviation department.

“It’s all about who shows passion for the company and will share that passion with their fellow classmates and increase recruitment at the university,” he said. “The main reason I came today was to be another resource for my fellow classmates and to share an intern perspective with them, because Garmin’s internship is truly unique. The skills and abilities you learn as an intern are crazy, and they treat you like a real engineer.” Lagermann’s goal is to secure a full-time job with Garmin after graduation in May 2021.

A Taste of the Real World

Dave Grant, the director of innovations and corporate outreach for the College and for University Extension, has been doing company site visits and job placements for students for more than 20 years.

“We want to give our students an opportunity to spend a few hours in a work environment, and it’s crucial employers see the quality of students we have,” he said. “Most companies love to see our students and our students get a chance to job shadow engineers—it’s a powerful tool.”

MU Engineering student Lia Howe of Lee’s Summit, Missouri says she made the trip because she has always been interested in Garmin and would like to work for the company. Howe is a second-year graduate student in electrical and computer engineering, with a background in bioengineering. 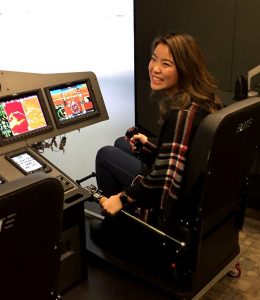 She says her father uses Garmin’s cycling devices and heart-monitoring watches, so she’s always been interested in the company.

“This would probably be my dream job,” Howe said. “It’s close to home and I’ve heard they are a really fun company with a good work-life balance. I’d love to work in their fitness/wearables division because my research is in sensors, so anything with sensors and computer engineering would be great.”

Howe works on a project on activity recognition with Prof. Marjorie Skubic at the College’s Center for Eldercare & Rehabilitation Technology, where she places accelerometers on test subjects, which she says is similar to the wearable technology manufactured by Garmin

Erika Zhou, a freshman from Columbia majoring in computer science, says she heard about the Garmin visit from the Leadership Academy and decided to go, even though she’s heard it is difficult for a freshman to get an internship.

“I am not that experienced, but since this was free and I’ve heard people say good things about Garmin, I decided to come and see what it is like to be an engineer at a company,” she said. “I want to see the work that they do and see how they do coding because I’m trying to learn more about the field of computer science.”

Many of the good things Mizzou students have heard about Garmin come from MU Engineering alumni who work at the company, which was ranked number five on Forbes Best Employers List in 2018. 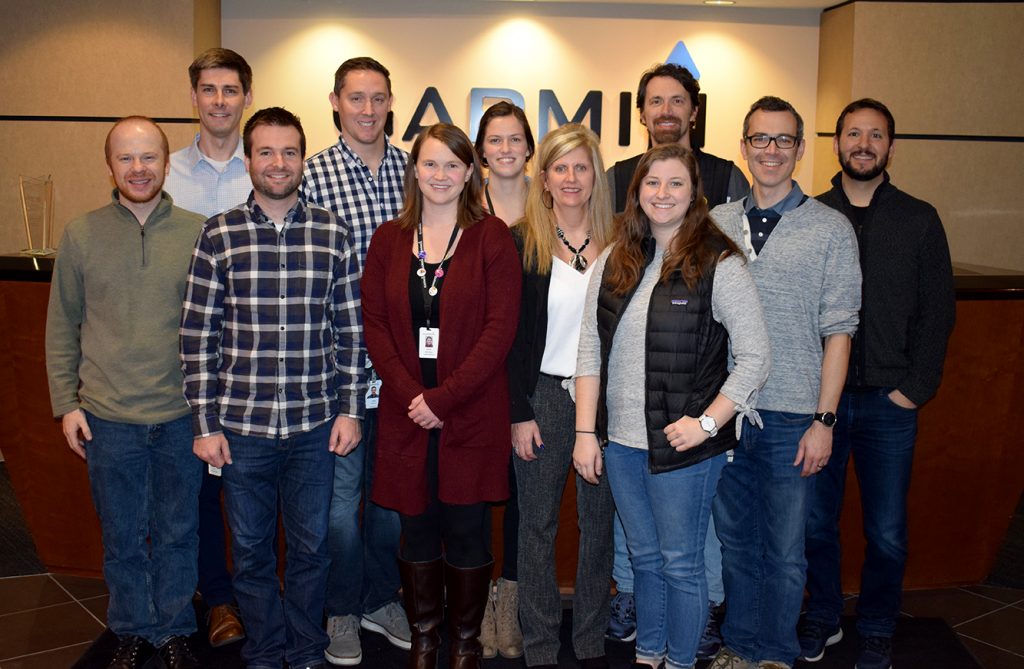 Samantha (Sammy) Warren of St. Louis graduated from Mizzou in 2018 with degrees in electrical engineering and computer engineering and went to work for Garmin right out of college. She had been an intern at Garmin and a Garmin Ambassador.

“I got a feel for what it’s like to work in a corporate environment—figuring out meetings and how to present yourself, so it really helped me get my foot in the door and be ready when I came to work. There are a lot of Mizzou grads here and a lot of young people, so I’ve had a nice, smooth transition.”

MU alumnus Roger Orf also earned degrees in electrical and computer engineering (1999) and started working for Garmin in 2001. He went to work for TWA right out of college and later moved to Olathe, where his wife worked, when TWA went bankrupt. He now works in Garmin’s aviation division.

“When I started we had a bunch of smaller products that were often retrofitted into aircraft, but one of the company founders had a vision to create integrated flight decks for small aircraft,” Orf said. “Our software team was around a dozen in aviation when I started, and now it’s become hundreds and hundreds across the country and the world.” He credits MU Engineering with preparing him for his career. “I felt like I had a rigorous problem-solving activity on a day-to-day basis, and that’s what I find here as well,” he said.

Orf and Warren were among the Mizzou alumni who led small groups of MU students on job shadowing tours near the end of the day-long visit to Garmin.

Garmin officials like Larson say these recruiting trips are an effective way for the company to find great talent, and many of the Mizzou students who visited the company’s international headquarters last week said they could see themselves working at Garmin after graduation. Larson says about 57% of the interns she hires end up working for the company full-time.

Lagermann certainly hopes to work for Garmin after he graduates in 2021, although he’s still trying to determine what he would like to do for the company.

“This summer I have a different position with Garmin as an electrical systems engineer intern in their hangar about five miles away, so I’m trying something different but it’s still in aviation,” he said. “I really loved being a design engineer last summer, so that may be what I do for my career, but I’m just trying out a different position.” 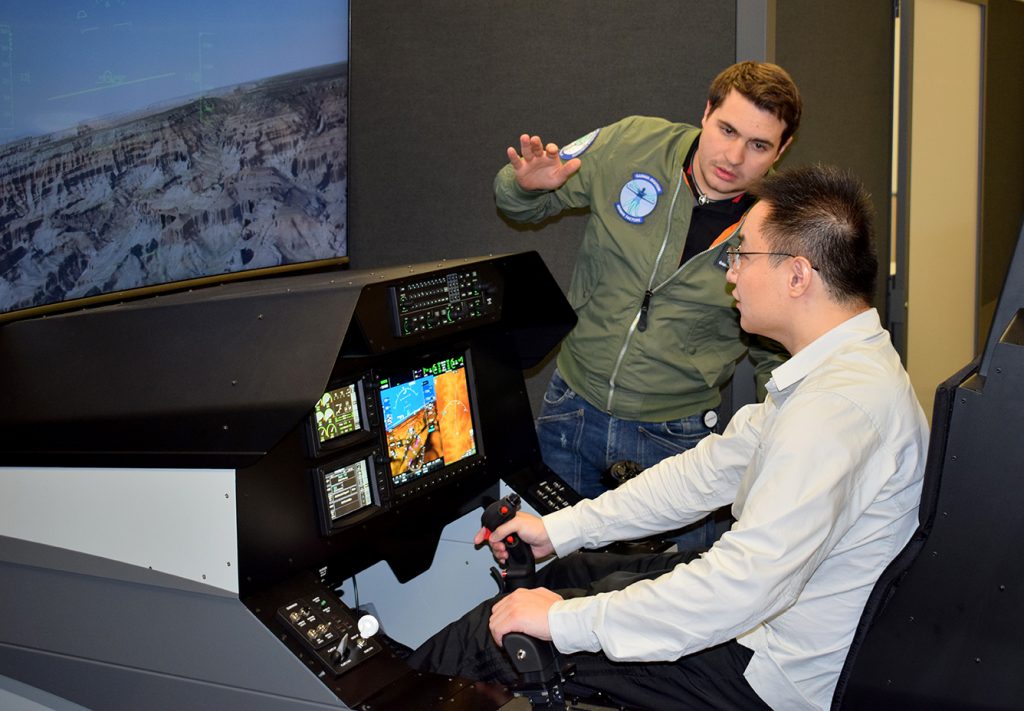 Howe said the site visit was cool and the flight simulators were awesome.

“It made me very excited to come to work here,” she said. “I like how they took us around the company, and I was surprised how large the facility is and how they are expanding and growing. And everybody is really positive.”

Zhou said she could envision doing an internship at Garmin after visiting the company.

“It was interesting to see the facility and how many different departments they have,” she said. “I thought the industrial design part was really interesting—how they make mock-ups of products and how they make everything from prototypes to the finished product.”

Grant is not surprised that students were impressed by everything they learned during the trip to Kansas and says he enjoys building relationships with companies that hire engineers.

“I just think it’s a great opportunity for students to come and meet their potential employers,” he said. “There are newer companies that we don’t have a relationship with yet, and the only way you can do that is to take a van of students there and build those relationships.”