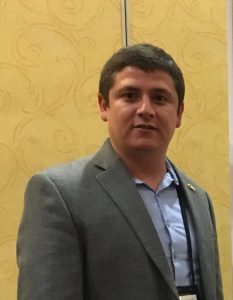 Oliver Giraldo-Londoño currently is a PhD candidate at the Georgia Institute of Technology.

Oliver Giraldo-Londoño has been selected as the College of Engineering’s inaugural James W. and Joan M. O’Neill Faculty Scholar in Engineering. Giraldo-Londoño currently is a PhD candidate at the Georgia Institute of Technology and expects to complete his degree this fall. He received a bachelor’s in civil engineering in 2010 from Universidad Nacional de Colombia, Sede Medellin, and his master’s in structural engineering in 2014 from Ohio University in Athens, Ohio.

Since 2010, Giraldo-Londoño has been working in the Structural Stability Research Group (GES) at Universidad Nacional de Colombia, Sede Medellin. He also has worked as an instructor of statics of structures and numerical methods at Universidad de Antioquia in Colombia, and currently is working as a graduate research assistant at the Georgia Institute of Technology, focusing in the areas of topology optimization and computational fracture mechanics.

Giraldo-Londoño has published research articles in the Journal of Engineering Mechanics, the International Journal of Non-Linear Mechanics, Engineering Fracture Mechanics and other prestigious journals. He also has served as a reviewer for 18 journals. His research focuses on single- and multi-physics topology optimization, with an emphasis on the design of multi-phase materials and material systems. Given its broad range of applications, the research promises spinoffs for biomedical innovation, sustainable design, resilient infrastructure and large-scale multi-functional materials and structures.

Giraldo-Londoño was named the COLFUTURO Scholar from 2012-14; he received the Young Researcher Award from COLCIENCIAS (the Colombian equivalent to National Science Foundation); and he won the Emilio Robledo Award (best undergraduate student award), awarded by the Colombian Society of Engineers.

The James W. and Joan M. O’Neill Faculty Scholar in Engineering was established by Mizzou Engineering alumnus James O’Neill, BS ’81 MS ’82 CiE, and his wife, Joan. Mr. O’Neill is retired from the Boeing Company, where he served as president of the company’s Global Services division and Development division, both business units of Boeing Defense, Space & Security. He is a charter member of the MU Civil Engineering Academy of Distinguished Alumni, serves on the Dean’s Industrial Advisory Board and is a recipient of the Missouri Honor Award from the MU College of Engineering.