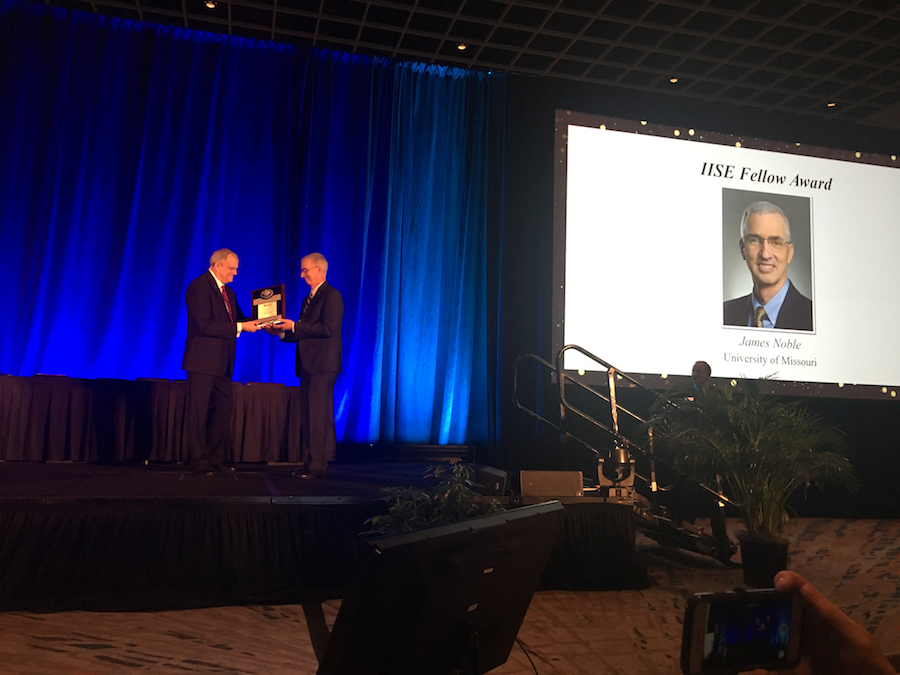 The Institute of Industrial and Systems Engineers, like many professional engineering organizations, recognizes its top members by naming them fellows. IISE fellows are elected for making “significant, nationally recognized contributions to industrial and systems engineering.”

Jim Noble fits the bill to a T, and that’s why the MU Industrial and Manufacturing Systems Engineering Professor earned one of IISE’s loftiest titles this year.

“It is a honor and privilege to be recognized by your peers for having contributed to the profession through innovation in industry-based research and mentoring students in new and significant ways,” Noble said.

Noble has been a member of the Mizzou Engineering faculty for nearly 28 years, and in that time, he’s done a great deal to grow the field of industrial and systems engineering both as an educator and researcher.

He serves as director of MU’s Center for Excellence in Logistics and Distribution (CELDi) site. CELDi is funded by the National Science Foundation and is a multi-school consortium founded in 2002 to pair academic partners with member companies to solve those companies’ needs in the areas of logistics and distribution system design. Work with CELDi has helped myriad companies and allowed a multitude of students to get practical, real-world experience with companies such as Bayer, Boeing, Hallmark, Honeywell and more.

He also was one of the driving forces behind the creation of the global supply chain management certificate, a partnership between IMSE and the Trulaske College of Business’ Department of Management. The certificate fills an educational gap, allowing MU students to gain expertise in a rapidly growing sector at the intersection of business and systems engineering.

Additionally, he earned the 2014 Win Horner Award for Innovative Writing Intensive Teaching, which recognizes faculty who start a new writing-intensive course or are taking a new direction with their writing-intensive teaching.

“Professionally, my greatest joy is seeing students grow in their ability to apply their industrial engineering skills over their academic careers and go out and make an impact in the organizations they work for — and to think that in at least some way I was able to help launch them,” Noble explained.

Noble’s own research has been a boon to the industrial engineering field. His work on integrated production systems and distribution networks has been funded by a variety of organizations and companies, including the NSF, Boeing, the Missouri Department of Transportation, Boeing, Square D / Schneider Electric, Leggett and Platt and more.

“It is exciting to conduct collaborative research with companies to solve both real and very hard problems, resulting in both new logistics/distribution tools that bring bottom-line corporate value and students that are prepared for tomorrow’s challenges,” he said.