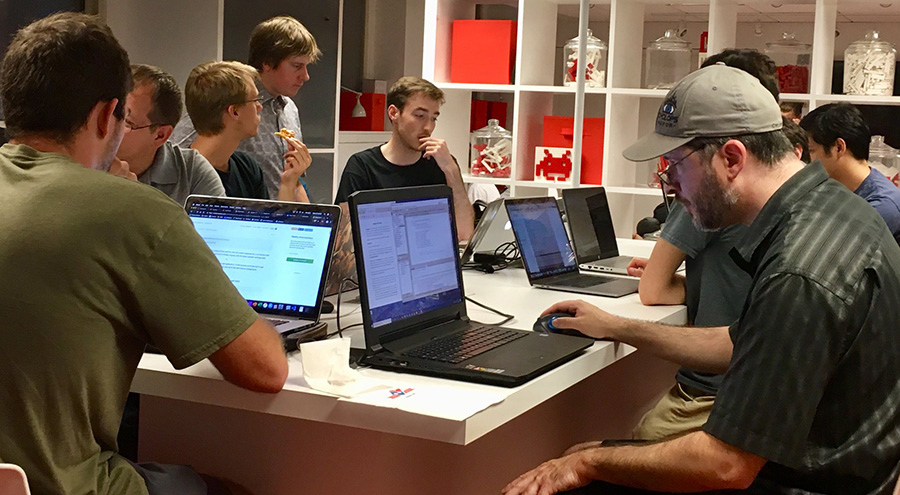 IT Developer Nights at Mizzou allow coders and programmers to network with like-minded peers.

Students interested in coding and programming are invited to weekly IT Developer Nights at Mizzou Engineering. The event series will continue this fall, although sessions will likely be held online.

IT Developer Nights are part social, part academic and part extracurricular. Nickolas Wergeles, an assistant professor of professional practice, has been hosting them for the past three years.

“It’s a relaxing hang out, but also students are working,” he said. “Students talk to one another, and they form groups to work on projects or code.”

In the past, the weekly event was held at the Reynolds Journalism Institute and Lafferre Hall. It attracted as many as 50 students, most of whom were Wergeles’ students and their guests.

Wergeles moved the event to a Zoom format in March. The virtual setting has become more of a discussion time, attracting about 10 students each week. But there are still plenty of benefits for those who come.

Mainly, the event provides an opportunity for students to get to know one another. That could be even more important this semester when social gatherings aren’t feasible.

“Developers  tend to keep to themselves, so this is an opportunity to get out of their rooms and talk to other people who code,” Wergeles said. “Students can ask question if they need help coding. They can discuss capstone or hack-a-thon ideas and implementation. They get get guidance on app ideas, inventions and becoming an entrepreneur. Or, if they want to just hang out, that’s fine, too.”

Wergeles has a consulting business and often hears from students wanting advice on how to open and run their own business.

Wergeles has several ideas for the event in the future. While on Zoom, he hopes to take advantage of breakout rooms to allow students to meet in small discussion groups. He may ask other faculty members, alumni and professionals to make guest appearances. And he ultimately hopes IT Developer Nights become an officially recognized campus event.

“It’s just a great way for developers to socialize and learn from one another,” he said.

Developer Nights are part of the IT Program at Mizzou Engineering.