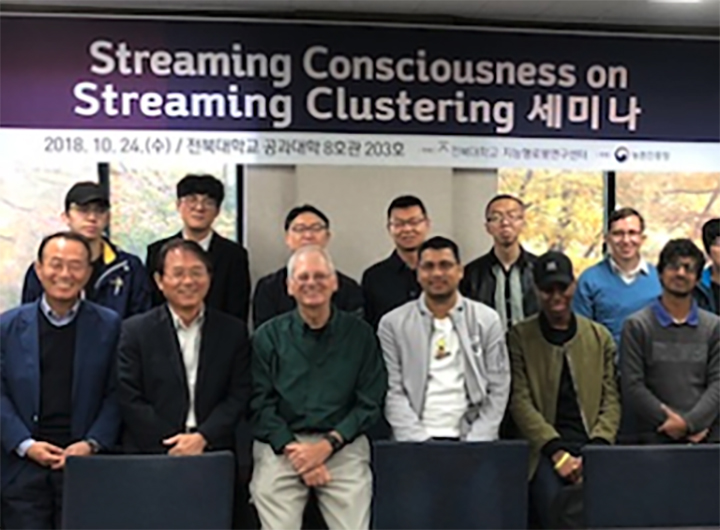 Jim Keller—an emeritus professor in the Department of Electrical Engineering and Computer Science—has received a top award from the Institute of Electrical and Electronics Engineers, the world’s largest technical professional organization.

Now, Keller has received the 2021 Frank Rosenblatt Award from IEEE. He is the 16th person to receive the international award, given to those who have made significant contributions to technology and science.

“I’m very honored by it,” Keller said during a recent Zoom interview from his Columbia home. “I’m humbled by it.”

Those who know him say the award is well-deserved. Keller is a “professor’s professor” who has led by example, said Noah Manring, interim dean of Mizzou Engineering.

“Jim has always been mindful of student interests, and his goal in life has never been self-promotion,” Manring said. “Jim has pursued knowledge and discovery for the sake of advancing science.”

IEEE is honoring Keller specifically for his work in fuzzy pattern recognition, fuzzy clustering and fuzzy technologies in computer vision.

Fuzziness allows for a little wiggle room in mathematics. Traditional mathematical logic relies on two values: something is either true or false. But in the physical world, there are ranges. Water, for instance, doesn’t have to be either hot or cold. It can be warm by varying degrees. In the 1960s, a scientist by the name of Lotfi Zadeh applied that understanding to a mathematical framework he called “fuzzy logic.”

Keller has advanced that concept. One of his recognized contributions was a paper he co-authored in the mid-1980s that incorporated fuzzy logic into the training of Rosenblatt’s neuron model. It was a precursor to today’s neural networks and deep learning. In the 1990s, he co-authored a paper about possibilistic clustering, which some consider a watershed moment in the history of fuzzy science.

Today, Keller is the principal investigator on a grant from the Office of Naval Research to detect sea mines. In this case, fuzzy pattern recognition is important because there are no crisp barriers underwater. It’s tough, for instance, to draw a distinct line between sea grass and rocks.

Mizzou has provided the perfect setting for his collaborative approach to research. Keller has worked with doctors and healthcare professionals, mathematicians, biomedical researchers and engineering peers.

“I owe much of any success I’ve had to great colleagues and outstanding students, as well as to a loving family who let me follow this dream,” he said. “I often start plenary talks with a paraphrase of Ringo Starr: ‘I get by with a lot of help from my friends.’”

In the 1960s—when Lotfi Zadeh was introducing the world to fuzzy logic—Keller was facing a somewhat fuzzy future.

He grew up in a working-class neighborhood in south St. Louis expecting to graduate from high school, get a job and settle down.

“I worked at a grocery store, and I remember the manager said something like, ‘If you get a couple of years of college in, you could get into management training and become an assistant manager,’” Keller recalled. “I said, ‘OK.’”

He earned a bachelor’s degree in mathematics. His dad suggested he become an actuary. Keller didn’t like the idea, so he went on to earn a master’s and discovered a passion for teaching.

When he didn’t get a job offer, Keller came to Mizzou for a doctoral degree. He became a research assistant in engineering, which led to a “soft-funded,” non-tenure track job and then to a tenured position.

At first, Keller struggled to find a way to connect his expertise in math with engineering principles.

“The idea of fuzzy sets was mostly esoteric, it was good math stuff,” he said. “I started looking for papers in engineering journals, but engineers didn’t really have a lot of use for it at the time.”

Then he read a book by Jim Bezdek about fuzzy pattern recognition. Bezdek is another pioneer in fuzzy research and today is one of Keller’s closest friends.

“I read that and thought, ‘Aw. Here is a solid engineering application,’” Keller recalled. “Reading that book and going over it with a student—we did it like a seminar—gave me the first three or four ideas that I then went forward with.”

Keller, who retired from teaching last fall, left a lasting impression on his students. In online reviews, they describe him as an interesting professor who “knows his stuff.” One student called him “truly inspiring.” Another said “terrific.” Someone gave him high marks for being “hilarious.”

Keller is known for a few antics, namely dressing up as a pirate. Just last week, he got an email from a former student who was celebrating his daughter’s first birthday. As a tribute, the man put on a pirate hat and wig, snapped a photo with his family and sent it to Keller with a note of appreciation.

Derek Anderson, an associate professor in electrical engineering and computer science, says Keller is the reason he went into academia.

“Jim is an unrivaled teacher, advisor and mentor to students and professors, locally and internationally,” Anderson said. “What makes Jim so unique is his down-to-earth ability to clearly describe complex concepts, the fact that he leads by example and the ways in which he inspires academic curiosity and dreaming. His combination of rigor, passion, caring and humor is a wonderful and effective recipe for engaging people and kick-starting life-long learning.”

A Life of Service

Keller has been involved in IEEE since 1992. He is currently serving his second two-year term as vice president of publications for the organization’s Computational Intelligence Society, which publishes seven specialized academic journals known as IEEE Transactions. He’s previously served as an associate editor and then editor-in-chief of an IEEE Transactions.

Later this month, he’s on the ballot to become the society’s next president. It’s a four-year commitment—one year as president-elect, two as president and one as past president. If elected, Keller says it could be his “last hurrah” in an elected position.

Keller has essentially been on a worldwide tour for the past 30 years. He was a distinguished lecturer for the Association for Computer Machinery, traveling across the country speaking at small schools in Louisiana, Texas, Colorado and Utah.

For IEEE, he’s spent weeks in Japan, Australia and France. He’s given keynote addresses in Korea and Rio de Janeiro.

In England, he’s an honorary professor at the University of Nottingham.

If travel restrictions lift, Keller will receive the Frank Rosenblatt Award at the IEEE International Conference on Fuzzy Systems in the small European country of Luxembourg next July.

“It’s hard for me to believe, actually,” Keller said of the award recognizing his life’s work. “How did a guy who grew up in St. Louis and wanted to be an assistant manager of a grocery store—how did I get to travel all over the world and have friends all over the planet?”

It may seem fuzzy to him, but it’s crystal clear to those who have worked alongside him.

“Dr. Keller is a pioneer in fuzzy pattern research. His work will impact generations to come,” said Syed Kamrul Islam, chair of Electrical Engineering and Computer Science. “This award is a testament to his contributions not only to science and technology, but also to teaching and service.”

Manring agreed. “I can’t think of a more deserving person.”