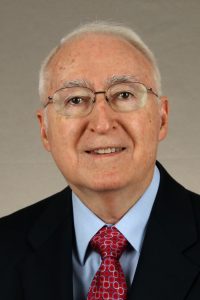 “It’s quite an honor. I’m very flattered to get it,” he said. “I looked at the list of previous recipients, and I said ‘Wow, this is amazing company.’”

Hart, raised in Raytown, Missouri, went to work at McDonnell-Douglas in St. Louis after earning his master’s degree in electrical engineering. He stayed with the organization ­— even after it was acquired by Boeing in 1997 — and worked on missile projects throughout his tenure until he retired in 2006.

At the time of his retirement, he was the Director of Naval Missile Launch Systems. He was responsible for running the division that integrated tactical missiles onto planes, ships, submarines and other platforms.

“My customers were militaries around the world — the U.S., NATO allies and other countries,” he said. “Twenty-seven in total. The diversity of our customers was fascinating, and it was as much as a business operation as an engineering operation.”

Over his long career, one of Hart’s favorite jobs was as program manager for the Harpoon Block 1C missile project. He led the team that started the design and development work and helped bring it into production. This is still the anti-ship missile most widely used by the U.S. Navy today.

Giving Back to Mizzou

As a student, Hart was involved with the Engineers’ Club and the traditions of Engineers’ Week. As an alumnus, Hart has been a member of the Department of Mechanical and Aerospace Engineering’s Industrial Advisory Council (IAC) for over 15 years. Although an electrical engineering graduate, his Boeing connections and experiences are a great match for MAE’s council. Hart has significantly contributed to modernizing the curriculum and providing his insights to students.

“I feel that the department is very fortunate to have Lawson Hart as an engaged IAC member,” Craig Kluever, director of undergraduate studies for MAE, wrote in support of the nomination. “He has helped to shape our curriculum and has gone above and beyond to help our MAE students understand the nuances of engineering design and the engineering workplace.”

Hart experienced the interdisciplinary nature of engineering early in his career. That is why he advises students to pick up and retain information from all classes, not just the ones within their majors.

Beyond being on the department’s IAC, Hart helped the College with increasing its involvement with Boeing’s research activities. He also has presented to capstone students in MAE and EECS on the importance of the design process. In 2007, Hart was honored with the Missouri Honor Award for Distinguished Service in Engineering.

Hart, along with the other 2020 and 2021 award recipients, will be honored by Mizzou Engineering on Friday, September 17.