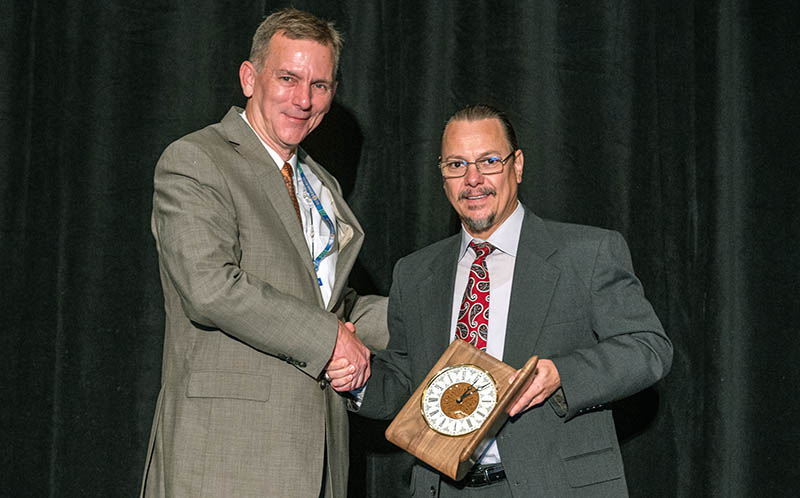 A Mizzou Engineer has received a prestigious award for his significant contributions to geotechnical engineering. Erik Loehr accepted the 2020-2021 Osterberg Memorial Award and gave a corresponding lecture at the International Foundations Congress and Equipment Exposition in Dallas in May.

The Deep Foundations Institute bestows the lecture and award in honor of Dr. Jorj O. Osterberg, a pioneer in the field recognized for innovations in soil sampling and testing.

“Any award is nice, but this one is special to me because of the people who have won the award in the past. They’re people I aspire to be like,” said Loehr, the Glen A. Barton Professor in Mechanical and Aerospace Engineering. “And Osterberg was certainly an innovator who had a big impact on our profession. So being recognized with the award named after him is an honor.”

The award specifically recognized Loehr’s research around foundations. For the past decade, he’s worked with the Missouri Department of Transportation (MoDOT), other state transportation agencies, and the Federal Highway Administration to develop practices and procedures to design more cost-effective bridge foundations. By constructing more customized foundations, Loehr has saved MoDOT more than $20 million.

“By saving money on foundations, MoDOT and other agencies can use those funds on other items such as safety measures or pavement repair,” Loehr said. “It helps them use taxpayer money as cost effectively as they can so they can spend that money in other ways that benefit the state and society.”

“Because of the work we did for MoDOT 10 years ago, we’re now getting to help draft changes to the AASHTO code that will implement similar practices so other states can take advantage of the cost savings,” he said. “To me, that’s really important and impactful.”

It’s not the first time Loehr has been honored for his contributions to the field. In 2019, he received the Harry Schnabel, Jr. Award from the Geo-Institute for developing the so-called Missouri Method for slope stabilization. The computer method helps engineers best position structural elements in the ground to stabilize landslides.

Both awards are given to those making real-world improvements in the area of geotechnical engineering.

“Engineering is an applied profession — there are engineers every day who have to design foundations or stabilize landslides,” he said. “It’s important to me to advance the profession so we can do it better than we used to, to take advantage of new knowledge and technology and capabilities that we didn’t have 20, 30, or 40 years ago. Both awards are for practical advancements, which makes me feel good because advancing the profession is what excites me.”

Loehr, who is a registered Professional Engineer in the State of Missouri, is on the board of the Deep Foundations Institute and is involved in the ASCE Geo-Institute, the International Association of Foundation Drilling (ADSC), and the Transportation Research Board (TRB). He’s also received the ADSC Outstanding Service Award, the K.B. Woods Award from TRB, and a National Science Foundation Career Award.