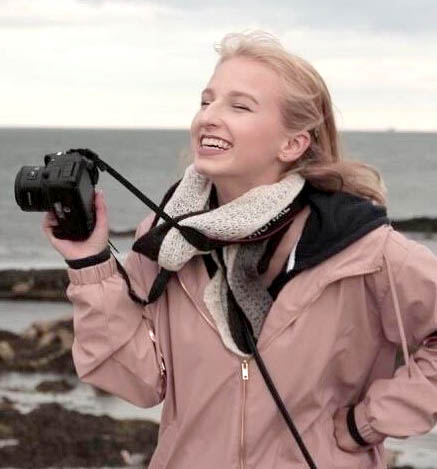 Ashley Rolf has learned photography, multimedia design and film in the IT Program at Mizzou. She’s pictured here during a study abroad trip to Ireland.

Ashley Rolf is an artistic person, and she wanted a creative major that would match her varied interests. She wasn’t, however, expecting to find that creative major in Information Technology.

“Originally, I was a voice and chemistry major,” she said. “And although I loved them both, they just didn’t quite feel right and weren’t taking me in a direction that I wanted for a future career.”

Her father and older brother both work in technology and have encouraged her to follow a similar path, but Rolf was skeptical. She couldn’t imagine herself writing code for a living.

Then she discovered the IT Program at Mizzou. And it wasn’t at all like she’d imagined.

“After my first class with Brian Maurer,” director of undergraduate studies, “I absolutely fell head-over-heels in love with the IT Program at Mizzou,” Rolf said. “I see myself in an artistic and creative field, and Mizzou’s IT Program offers that flexibility.”

She has since studied photography, film and graphic design, all while gaining a foundation in science and technology.

“The Mizzou IT program is the perfect marriage of multimedia design and technical development and application,” she said. “I have yet to see a college offer such a unique degree that caters to so many students interested in a technical, but also creative, degree. Mizzou Engineering has reimagined IT, and it has been the best choice of my life to be a part of this program and degree.”

Rolf is from Maryland but comes from a long line of Mizzou Tigers. Her grandparents, aunt and father all graduated from Mizzou, qualifying Ralf for a Black and Gold Scholarship.

Since arriving on campus, Rolf has taken advantage of the many opportunities Mizzou offers.

The summer after her sophomore year, she studied abroad in Ireland. There, she and about 40 other IT students spent a month studying photography, filmmaking and editing, and learned technical skills by operating professional equipment.

“Getting hands-on experience with filming and getting to work with professional actors from California, all while getting lost in your craft in the landscapes of Ireland with a group of students you’ve never met, but somehow end up being your family—you just can’t recreate that experience,” she said. “It’s a once-in-a-lifetime opportunity, and the IT program just has it down.”Rolf has also had two internships during her time at Mizzou. She worked as multimedia designer and developer with an independent start-up tech company in Maryland, where she was also in charge of maintaining and writing for the company blog.

This past spring, the Disney College Program selected her to participate. Disney canceled the internship program halfway through because of COVID-19, but not before Rolf had the chance to meet students from across the world.

“It was one of the best things I have ever had the chance to participate in,” she said. “It may seem unrelated to IT, but the fact that the IT Program supported and welcomed my decision to take an internship unrelated to my major was so appreciated. I was able to meet higher ups in the IT division at the Disney Parks and it truly broadened my horizons in terms of a more colorful college experience.”

Today, Rolf urges other students seeking a creative major to consider IT.

“Are you interested in art and film but want a basis in a STEM major? Go IT,” she said. “Are you wanting to go into business but want the technology background? Go IT. This is one of the most, if not the most, versatile and welcoming programs on campus.”

The program takes away the stress of uncertainty and makes it fun to explore new fields, Rolf said.

“It feels more like I am pursuing my passions than a degree,” she said. “And that’s what Mizzou IT is to me. There’s nothing I’d recommend more than Mizzou’s IT program.”

After graduating, Rolf hopes to work in graphic design and multimedia development. Her dream job would be to work for Pixar Animation. The IT degree has given her the skills she needs to make that happen, she said.

“I feel very confident entering the job market,” Rolf said. “At Mizzou, I have been given artistic and technical training and learning opportunities that no other school can match. At other universities, I would have needed to double major to get all the experiences and opportunities that Mizzou packs into one in the IT degree.”