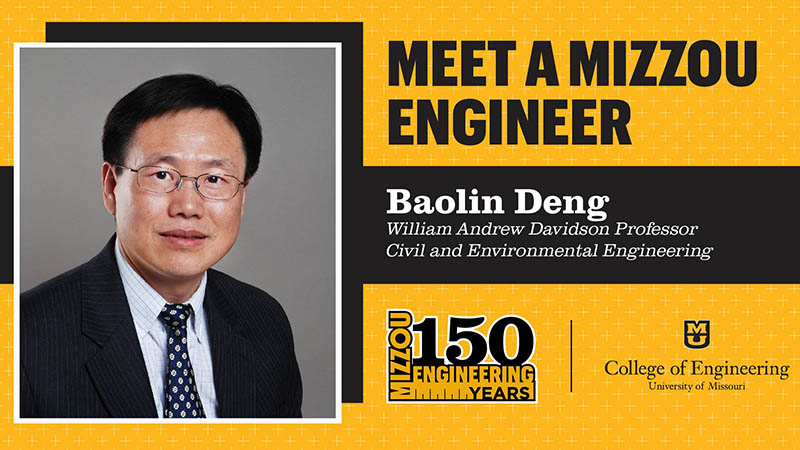 Toxic metals that pollute our water are tough to get out, a problem for living creatures that need to hydrate. There are ways, however, to remove these tiny toxins or even alter their properties so they’re less harmful to our health.

Meet Baolin Deng, who has spent decades finding ways to improve the quality of the water we drink and reducing our risk of disease.

Deng is William Andrew Davidson Professor in the Department of Civil and Environmental Engineering, where he’s worked to better understand the chemical and biological transformation of contaminants to mitigate their harmful effects.

Like his research itself, you might say the trajectory of Deng’s academic career emerged from a matter of life and death.

While he knew from a young age that he wanted to be an engineer, Deng was originally pursuing a path in geochemistry.

Three years into a master’s degree, his plans changed during a six-month field study at a tin mine in southwest China. During the trip, a site engineer took Deng and his group to a burial ground. The dead, he learned, had all been miners who had become site directors only to die from radon exposure.

“People worked hard, were promoted and just died,” Deng said. “That shocked me. We want to have mines and infrastructure, but if people cannot survive, what is the meaning? After that episode, I told my graduate advisor I wanted to switch to an environmental area. He was shocked.”

Deng completed his master’s with a newfound focus on improving lives. He relocated to the U.S., earned a PhD in environmental engineering, did postdoctoral research in the Air Force Research Laboratory, and started his academic career searching for better ways to purify water.

He came to the University of Missouri in 2001, and used the prestigious CAREER Award from the National Science Foundation to study arsenic removal from drinking water.

Arsenic occurs naturally in the ground but has also entered the environment through pesticides use. It seeps into drinking water, and long-term ingestion can lead to health problems including several types of cancer.

Until 2001, the Environmental Protection Agency deemed the acceptable standard of arsenic in water to be 50 parts per billion (ppb). For human health, that equates to the risks associated with smoking, Deng said.

Today, the EPA standard is 10 ppb. The World Health Organization has the same guideline; however, in many parts of the world arsenic levels exceed that limit.

“Millions of people are still exposed to arsenic, and that’s a major issue,” Deng said. “That’s why developing technologies to take arsenic out in an effective way has become very important.”

Over the years, Deng has developed several novel approaches to removing arsenic from drinking water. More recently, Deng published a proof-of-concept for a filter design that uses two materials to first trap, then store, arsenic as water flows through. The filter is an affordable system people could use at home to purify their drinking water.

Deng and his team are also looking at lead contamination, which remains a problem across the U.S. as lead pipes were standard until the 1980s. An estimated 15 to 22 million Americans are still exposed to lead from tap water flowing through lead service lines. Historically, Missouri was the leading source of lead in the world, mining activities had led its exposure through contaminated dust, air, water and soil.

To mitigate the risk of exposure to other types of toxins, Deng has come up with a process to change their forms, converting contaminants through chemical reactions to make them less harmful.

“We need a similar approach for lead,” he said, “because we don’t have a way to transform lead into something that is not lead.”

In his 20 years at Mizzou Engineering, Deng has earned a reputation internationally for his research. His team was among the first of few groups to successfully develop nanocomposite thin-film nanofiltration and reverse osmosis membranes for high performance desalination and water purification.

He developed a popular evaluation to assess water quality. He’s collaborated with the U.S. Geological Survey Columbia Environmental Research Center to examine the toxicity of sediment and its impact on aquatic organisms. In 2018, he received a Lifetime Achievement Award from the Chinese-American Professors in Environmental Engineering and Science.

Until recently, Deng served as director of the Missouri Water Resources Research Center. Earlier this year, the center merged with the Center for Watershed Management and Water Quality to form the Missouri Water Center. Deng now co-directs that interdisciplinary center alongside Damon Hall, assistant professor of biological engineering with a joint appointment in the School of Natural Resources.

An eye on the future

When he’s not finding ways to keep toxins at bay, Deng is ensuring future generations are prepared to continue the work.

In the classroom, he uses real-world examples to highlight the importance of the curriculum. At the Missouri Water Center, he and collaborators are focused on training a new generation of water experts to tackle complicated water management issues.

It will take interdisciplinary collaboration to continue to address environmental problems, Deng said.

“We’re not talking about a narrow field,” he said. “You need that background in chemistry and biology, as well as engineering fundamentals. We have to use many different disciplines and concepts and put those together as a system to address the complex issues and major challenges we’re facing.”

Deng said he tries to help students see those connections and understand how the pieces must work together to ultimately improve the world.

After all, that’s what’s kept him focused on the mission he set for himself at a burial ground in China more than 30 years ago.

“I try to think about the impact on society and on people,” he said when asked what motivates him. “I think about the future, my daughter. Will their future be better than ours?”

Study engineering alongside researchers changing the world. Learn more about civil and environmental engineering at Mizzou.