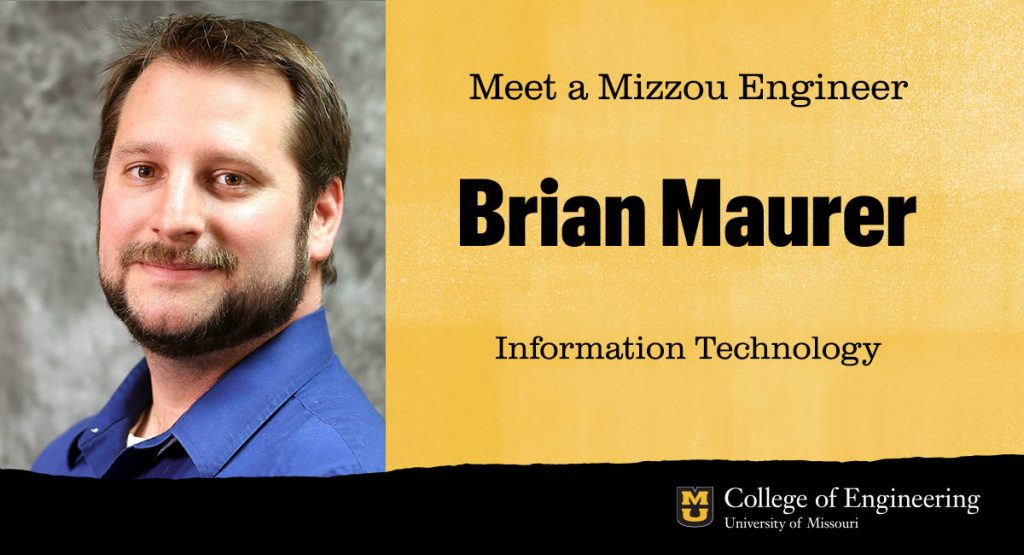 Students studying information technology at Mizzou Engineering are thinking beyond the wires and circuits and code. Rather, they’re using that foundational knowledge to help usher in the next generation of automation, virtual and augmented reality, and computational systems. Meet Brian Maurer, who’s leading the program into a new era of innovation.

Maurer is director of the Information Technology Program, a position he assumed in January after serving as director of undergraduate studies. In both roles, Maurer keeps students at the forefront with an eye on the future.

“Our goal is to set them in the right direction for what’s coming, not necessarily for what’s here now,” he said. “An IT degree isn’t just about maintaining systems but about building something brand new.”

And that message is resonating. IT students are excited to be working with Spot, an autonomous robot from Boston Dynamics. They’re developing apps and creating digital assets within virtual and augmented environments. They’re advancing programming and software development skills while also preparing to defend Internet of Things (IoT) systems against cyber-attacks.

“As a program, we’re re-energizing students,” Maurer said. “We’re fully integrating traditional competencies around what IT is becoming.”

The IT Program is well-known at Mizzou Engineering for being a hands-on educational environment where students learn by doing.

Faculty, including Maurer, find opportunities for students to apply classroom lessons to real-life scenarios. In the case of Spot, for instance, students are programming the robot to complete autonomous tasks at Ameren’s power plant in Callaway County. Last semester, students worked on projects for Missouri 2021’s bicentennial committee, including creating a virtual museum. And Maurer has taken students to Ireland to create media assets, including short films, and to Kansas City to help on the set of a pilot for a TV series.

“These collaborations are great because they give students a platform to see how the technology works and is used in the real world,” Maurer said.

It’s a style that aligns perfectly with his own teaching philosophies. Maurer forgoes traditional lectures in favor of discussions where students can reach their own conclusions as they learn.

“I provide students a means to discover concepts,” he said. “Students have the capability to discover if provided a means to discover. Instead of a lecture on ethics, for instance, students are presented with ethical scenarios and then debate over it. Discovering through real-life scenarios energizes students, and they connect with that. They’re constantly engaged.”

That philosophy translates to Maurer’s leadership style, as well. His role as director, he says, is to support faculty members’ goals and help them facilitate what they need to take their courses and research to the next level.

“I trust people to be able to do what they’re good at and advocate for them as much as possible, both internally and externally,” he said.

This past year, that included advocating for four new certificate programs in specialized areas of IT, including web and mobile app development, cybersecurity, media technology and design, and information systems and technology. The certificates, which can be completed on campus or online, allow current students and working professionals to learn the latest technology trends.

Three of the four certificates were approved and launched during the COVID-19 pandemic. That’s partly because IT faculty were already proven leaders when it comes to online content delivery.

“One of the greatest accomplishments we have had was maintaining program stability in the online environment,” Maurer said. “Everyone went online, but I feel we did it really well, and we continue to do it really well.”

If anyone understands the importance of flexibility, it’s Maurer. Over the years, he’s continually worked to improve his skillsets, carve out new opportunities and explore his passions.

Growing up, Maurer wanted to design buildings on Mars. While not an actual profession — at least not yet — the idea combined two of his many interests: architecture and astrophysics.

He started his undergraduate studies at Mizzou Engineering but ultimately decided he wanted to pursue other interests, namely literature and creative writing. So, he switched majors and earned an English degree.

“My degree was a facet to provide a means to explore, which I guess you could say is what an English degree is designed to do,” he said. “It was helpful, but what I wanted was to explore what a career was going to let me do. It wasn’t the job I wanted but attributes of jobs. I liked working with people, discovering, learning and collaborating.”

In the mid 2000s, when digital cameras were just coming out, he decided to pursue new types of storytelling through filmmaking. He taught himself to use the equipment and to work with lighting, effects and audio. He completed his first feature film in 2009, just a year after buying his first camera.

At the same time, Maurer was working for MU Extension, which allowed him to experience university life as a professional. The position uncovered an interest in academia and teaching, and Maurer went on to earn a Master of Education in Information Science and Learning Technologies.

“What education afforded me to do was explore and create with students and be around that high energy, while still providing a window in the summer months to produce films,” he said. “It’s a combination of things that I really enjoy: I like academia, I like working on campus, I like being around intellectualism. So, it seemed like the right way to go.”

Maurer began teaching in the College of Arts & Science, where he helped develop the film studies program. Over the years, he also wrote, directed and produced more than a dozen films, including In the Wake of Ire, which won eight awards, including Best American Feature Film at the 2018 Indy Film Fest.

Wanting a way to explore more of the technical side of film production, Maurer accepted a teaching position in the IT Program in 2017, bringing him back to Mizzou Engineering and opening new opportunities. Maurer is now conducting research around color palettes and cinematography in addition to his teaching and leadership roles, as well as continuing to work on a television pilot.

Never satisfied with the status quo, Maurer is also now pursuing an EdD in Educational Leadership and Policy Analysis.

“I have this unyielding need to always find ways to better whatever it is I’m doing,” he said. “Can we teach better? Can we organize ourselves better? Can we be better in terms of how we build our courses and curriculum? I’m constantly intellectualizing and evaluating everything to benefit our students.”