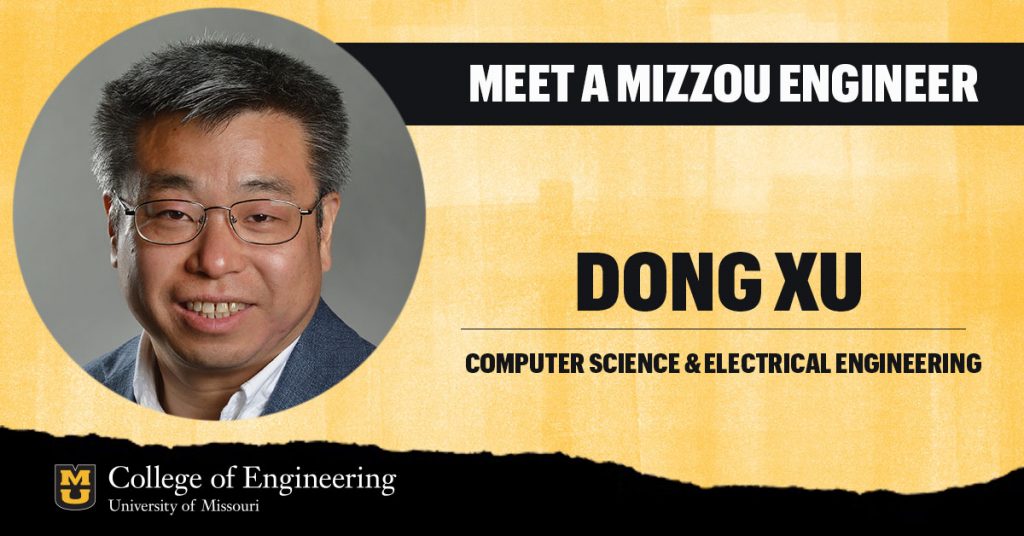 Computational capabilities, medical breakthroughs and biological advancements are accelerating at lightning speeds. A Mizzou Engineering researcher is keeping up. Meet Dong Xu, a bioinformatics expert whose fingerprints can be seen across Mizzou Engineering and the MU campus.

Xu is Shumaker Endowed Professor in Bioinformatics in the Electrical Engineering and Computer Science Department. He’s also an investigator at the Bond Life Sciences Center, and a core faculty member of MU Institute for Data Science and Informatics and MU’s Interdisciplinary Plant Group. And now, he’s part of NextGen Precision Health, a facility opening next year to advance interdisciplinary collaboration and the next generation of precision health discoveries.

“I’m driven by curiosity,” Xu said. “The scientific questions are very intriguing by themselves. Biology is amazing and machine learning is inspiring. That’s the scholarship side. On the other side, the work is meaningful and ties to direct application or potential application.”

A Passion for Science

Xu’s lifelong interest in science has kept him in academia even when other, more lucrative opportunities came along.

After earning a bachelor’s and master’s in physics from Peking University in China, Xu came to the U.S. to earn a doctorate in computational biology from the University of Illinois, Urbana-Champaign. It was 1995 when technology as we know it was in its infancy.

“A lot of people with similar backgrounds were going in industry,” he said. “At several points, there were opportunities for me to go into industry and double my salary. But then I went to a conference and heard Nobel Prize winners talk about science. I was so interested in the topics, I thought it would be better to pursue science. I really enjoy it, and with the support of my wife, I was able to stay in academia.”

Lucky for Mizzou, where Xu landed in 2003. Here, he has made substantial contributions to bioinformatics, which is the use of sophisticated computing to study biological and medical problems.

“A lot of biological problems require computational analysis because there’s so much data generated,” he said. “It’s not like the old days where you can put data in an Excel file and manually analyze it. You need advanced computational algorithms to handle the data.”

Xu has developed computational methods to do that work for colleagues around campus and internationally, as well as for industry partners.

Helping in the Fight Against Cancer

Recently, Xu’s lab and a research team from MU and the Ohio State University created a new way to analyze data from single-cell RNA-sequencing using machine learning.  Single-cell genetic profiling measures how many genes are present and how they are expressed from the level of an individual cell. It results in no less than tens of thousands of cells that need to be analyzed.

“Currently, determining conclusions from this type of data can be challenging because a lot of data must be filtered and integrated in order to find what researchers are looking for,” Xu said in a recent interview with the MU News Bureau. “So, we applied one of the newest machine-learning methods to tackle this problem — a graph neural network.”

By having a manageable way to see and understand single-cell data, scientists can study the interactions between cells. When diseases such as cancer are present, that can lead to faster and better treatments.

The researchers published their findings in Nature Communications, a highly prestigious journal.

Xu has also tackled cancer by helping doctors better understand why immunotherapy works for some patients but not others. Immunotherapy is a new revolution in cancer treatment that allows patients to boost their own immune systems in order to fight the disease.

“One problem is that it’s hit or miss,” Xu said. “So in 20% to 30% of cases, treatment is very good. Some patients recover even with late-stage cancer. Unfortunately, it’s not effective for everyone. The majority of people cannot be treated well with this method. So the idea is whether we can predict who can be treated well and also understand what makes treatment successful.”

Xu also uses his expertise in bioinformatics to assist in plant sciences. He works closely with Gary Stacey and Henry Nguyen, both of whom are Curators Distinguished Professors of plant sciences in the College of Agriculture, Food & Natural Resources and others to better understand fundamental biological processes in hopes of improving traits for crops.

“I got involved in plant sciences really thanks to the strong program on this campus,” Xu said. “We have a lot of internationally renowned plant scientists doing cutting-edge research. I work with them to help analyze the data.”

About 10 years ago, Xu initiated the development of Soybean Knowledge Base (SoyKB), a web resource with analytical tools for soybean-related data. SoyKB provides tools for scientists to find information about soybean genes, gene expressions, metabolic pathways and more. SoyKB is now widely used in the research community.

Xu is also on an international stage when it comes to predicting protein structures. His lab has been participating in Critical Assessment of Structure Prediction (CASP) conference for many years. The international event challenges participants to predict protein structures using artificial intelligence and attracts researchers from academia and tech giants such as Google.

He has used similar computational models in other applications. Last year, he began working with an international company to develop a more accurate test for COVID-19 by analyzing DNA samples. And he recently teamed up with the U.S. Geological Survey to come up with a handheld device that can gauge oil levels in water, essentially allowing citizens to monitor pollution in their own communities.

If there’s a through-line to his diverse research interests, it’s the pursuit of science that improves lives.

“There’s an impact,” Xu said. “Even though we don’t work directly on therapy or plant breeding or environmental issues, the things we work on have a direct impact and can help from the translational aspect. So we can see the social benefit, and that makes you feel good because those things are useful and meaningful.”

A Passion for Teaching

When he’s not helping researchers find a treatment for cancer, improve plant genomics or monitor oil spills, Xu can be found in the classroom inspiring future generations of researchers. Currently, he teaches an upper-level computer science course around algorithms.

Xu describes his teaching style as challenge-based. He provides opportunities for students to practice what they learn. He also incorporates mock interview questions and programming challenges that the industry uses when hiring. This motivates students to go deeper while also preparing them for the real world.

He credits faculty in the Information Technology Program for helping him tweak his teaching style to fit the needs of today’s students. Xu served as director of the IT Program from 2016 through 2020, during which time it became known for providing students with hands-on experiences.

“I learned a lot from IT faculty like Dale Musser, Brian Maurer and Chip Gubera, who all have advanced degrees in education,” he said. “Teaching is not like research. In my opinion, if you do it well, teaching is just as hard as research. There are a lot of things to understand and learn.”

Xu has held a number of other leadership roles on campus and in the scientific community. Prior to taking the helm of IT, he served as chair of the computer science department before it merged with electrical engineering in 2017. Xu is a member of the Institute of Electrical and Electronics Engineers (IEEE) and the IEEE Computational Intelligence Society. He’s a senior member of the International Society of Computational Biology. And he’s been named a Fellow of both the American Association for the Advancement of Science and the American Institute for Medical and Biological Engineering.

From impactful research to meaningful teaching and a legacy of leadership, Xu has carved out an impressive legacy at Mizzou. So what’s next? In the near future, he hopes to continue to focus on single-cell data analysis that can support NextGen Precision Health initiatives.

Longer-term goals will depend on where science takes him and technological advances.

“My main objective is to stay cutting-edge in terms of applying deep learning methods in biology,” he said. “We really want to stay ahead of the curve and be leaders in the subject. Deep learning areas are just amazing, and the field is moving really, really fast.”

Mizzou Engineering — thanks to Xu — is keeping up.