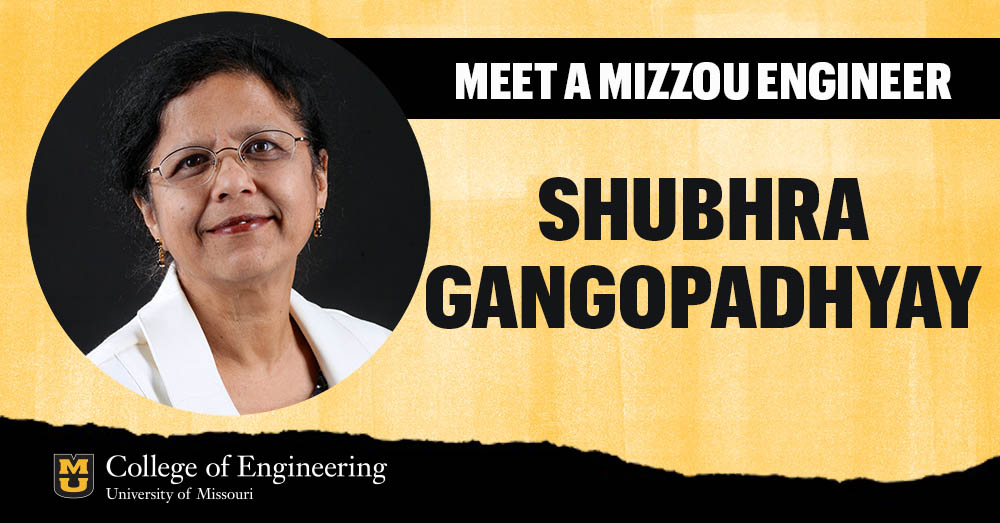 Sometimes, before you can think big, you have to think small. After all, you can’t tackle the big problems without interacting with the microscopic molecules, electrons and atoms that make up our world. Meet Shubhra Gangopadhyay, professor, researcher and inventor of teeny-tiny technologies.

Gangopadhyay has built a career around detecting and interacting with nanoparticles. Today, she is C.W. LaPierre Endowed Chair Professor in the Department of Electrical Engineering and Computer Science and Co-Director of the Center for Nano/Micro Systems and Nanotechnology. She also has joint appointments in Biological Engineering at Mizzou Engineering and the Physics Department in the College of Arts and Science. And she just returned following a four-year stint with the National Science Foundation (NSF).

From Computer Chips to COVID

Gangopadhyay’s interest in nanotechnology evolved naturally. She was working in electronics when she came to the U.S. in the 1980s. At the time, researchers were developing smaller, more powerful computer chips.

“As the computer chip technology shrunk in size, it became nano automatically,” she said. “So we were forced to look into what happens when your device, for instance, goes into nano scale. The properties and parameters change, so you are led into that area. It happened over time as the research progressed in that area.”

If you’re having a hard time picturing what “nano” means, you’re not alone. Most microscopes also can’t see nanoparticles, either.

The basic dimension of a nanometer is one-billionth of a meter. It’s 10 times smaller than the width of DNA but 10 times larger than an atom. The head of a pin is about 1 million nanometers wide. To put it another way, a fingernail grows about a nanometer every second.

But don’t let their size fool you. These systems are tiny but mighty. The molecules inside the novel coronavirus even shut down the world.

“All the ways we run our computers and electronics are made up of electrons that we cannot see but can study,” she said. “The same principle applies to diseases and viruses such as COVID-19.”

Her team is in the process of developing ultra-sensitive tests that can better detect COVID antigens early, even before someone shows symptoms. And they’re designing a faster way to detect the presence of COVID from urine or saliva samples.

The COVID work is the latest layer of a career built on curiosity. Gangopadhyay has always been fascinated by the way things work.

“From my childhood, I liked to explore things,” she said. “We had a lab at home where I could do small experiments. I loved science from my childhood. I was just curious.”

After earning a PhD in Physics from the Indian Institute of Technology, Gangopadhyay spent two years in Germany, where she was a guest scientist at Universität Kaiserslautern. She then spent 17 years at Texas Tech University, where she rose to the rank of professor and co-director of the Nano Tech Center. At Texas Tech, she won a Scientist of the Year Award and helped pioneer an Industrial Master of Science Program.

But it wasn’t until Mizzou Engineering recruited her in 2003 that she was able to combine her expertise in nano systems with biological applications.

“I remember thinking, ‘Why should I come to Mizzou?’” she recalled. “But my research has flourished because Mizzou is very collaborative and promotes interdisciplinary research. I came here and could work with the medical school, biochemistry and veterinary medicine. Opportunities for collaboration opened up, and my research in bio-nano areas dominate because Mizzou gave me opportunities to go beyond my comfort zone.”

For the past 17 years, she’s worked on dozens of applications around nano systems.

She developed a state-of-the-art drug delivery system—roughly the size of four popcorn kernels—that has the capability of destroying kidney stones, ulcers and even tumors. It’s effective because of its microchip technology that triggers supersonic shockwaves. Fuel and oxidizers are ignited to generate energy similar to the thermites used in firecrackers. The process releases energy very quickly to deliver genetic materials into cells.

“I have done a lot of work bringing molecules of metal and oxidizers together,” she said. “One application is on the microscopic level, but it can also make large-scale explosives. So you can create materials for enhancing propellants or put it on a chip and use it for gene therapy and drug delivery.”

Gangopadhyay also developed a plasmonic chip to enhance the features of a traditional microscope to make it more powerful. Her team used DVDs and Blu-Ray discs as templates to create gratings on microscopic slides. The work created a more accessible and inexpensive type of nanoscale microscopy, allowing others to detect and analyze nano-materials.

“I’ve worked in many different areas because I get bored working in one area,” she said. “That inspired me to look for areas that go beyond my comfort zone. I try to think outside of the box, and that has expanded me into new areas. That is what I have done throughout my career.”

Over almost four decades of her career, her research was supported by federal agencies such as the National Science Foundation, Department of Defense and National Institute of Health as well as private industries such as The Boeing Company, Texas Instruments, Actel Corporation, Global Good and Bio-Rad Laboratories.

Gangopadhyay is known for contributing her expertise to support others.

She uses her research experiences to help students better understand complex concepts in classroom settings. In the past, her students have made computer chips and have built  solar cells to generate energy.

“I like teaching which is more interactive and hands on,” she said. “I believe if you can make something, you understand the science better.”

Other colleagues have praised her for having an influence on their own work, and this past year, she successfully nominated Mechanical and Aerospace Engineering Professor Hongbin “Bill” Ma for election as a fellow of the National Academy of Inventors, an honor she received in 2015.

Gangopadhyay is also a fellow of the American Physical Society (APS Physics), and a fellow of the American Institute for Medical and Biological Engineering (AIMBE). In 2002, she received an Achievement Rewards for College Scientists Scientist of the Year Award, and in 2008, she was a Nano 50 award recipient for the invention of nanoengineered thermites and applications.

From Mizzou to NSF and Back

The NSF’s Division of Electrical, Communications and Cyber Systems (ECCS) has supported Gangopadhyay’s research continuously since 1990. In 2016, she decided to give back by sharing her expertise.

That year, she took a sabbatical from the university to serve as NSF’s Program Director of ECCS, Engineering Directorate.

The position had three primary functions. She served as a mentor to new faculty, helping guide them through proposal processes. She interacted with the scientific community to prioritize areas of importance. And she worked to identify future needs both in her area and in other areas, namely health-related programs.

Of course, COVID disrupted that routine.

“When COVID hit, the good thing was that I was already working with health care,” she said. “We had special funding for COVID, so we really had to think about what the most important areas were, areas that could be funded so they would have an immediate impact. So instead of looking for proposals that had a future impact like we historically did, here we needed immediate impacts.”

Gangopadhyay returned to Mizzou in the fall of 2020 and immediately began sharing what she learned at NSF to help other Mizzou Engineers. In November, she hosted a workshop for faculty: “Guidance for Preparing Successful NSF Proposals: An Insider’s Perspective.”

A Legacy of Mentorship

This semester, she and colleagues are hosting a workshop series and mentoring program around NSF’s Faculty Early Career Development Program, or CAREER Program. She’s working with Giovanna Guidoboni, associate dean for research; Shelley Hilton, director of research development; and Matthew Maschmann, an associate professor in Mechanical and Aerospace Engineering and Co-Director of the Center for Nano/Micro Systems and Nanotechnology.

“The NSF Career Program is a prestigious award for untenured faculty,” she said. ”The success rate is very low, a lot of times because faculty are not mentored properly. It’s what I did for four years at NSF, so now it’s time to give back to a university that has done a lot for me and my career.”

Throughout the four-part workshop series, which runs through July, the team is helping 13 faculty members prepare CAREER proposals. Gangopadhyay is also providing one-on-one mentorship and will review proposals at the end of the series.

“All of my life, I have really worked hard to encourage women and minorities,” she said. “I like mentoring. The best part of my job at NSF was mentoring new faculty and guiding them through the process of writing proposals and how to be successful. It’s a lot of work, but I really enjoy it. And hopefully, it will be beneficial for years to come.”