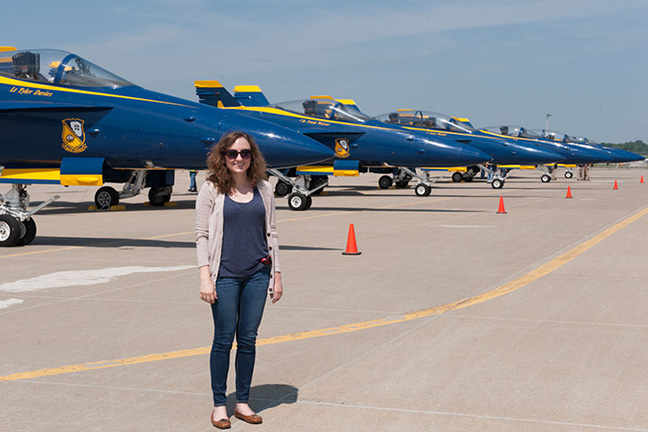 Kate Doetsch, a 2013 chemical engineering graduate, was one of 10 recipients of the Society of Women Engineers (SWE) Distinguished New Engineer Award, given annually to women engineers who are actively engaged in engineering.

Doetsch and the other 2021 award recipients were recognized at WE21, the world’s largest conference and career fair for women engineers and technologists, on Oct. 21-23, in Indianapolis, Indiana.

“It is a huge honor,” Doetsch said. “It’s given to engineers within the first 10 years of their careers but typically it takes time to reach those technical achievements, SWE involvement, key leadership positions and contributions to the community. Typically, there’s a short time window when you’re eligible for the award and have a realistic chance of getting it.” 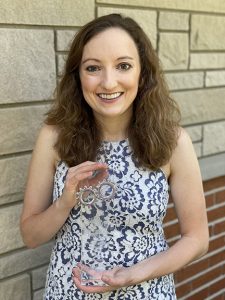 Doetsch received the award based on her career at Boeing, where she has worked since interning with the company the summer after her junior year. As a materials and process engineer with the company, Doetsch works with the 777X program and supports the T-7A Red Hawk U.S. Air Force advanced pilot training program, by providing paint and sealing expertise during both design and build phases. Her first two years at Boeing were spent supporting F-15 and F-18 fixed-wing aircraft production programs.

Despite knowing she wanted a career involving science or math at an early age, Doetsch did not hone in on engineering until her freshman year of high school. While thumbing through a publication that listed engineering disciplines, she felt drawn toward chemical engineering.

Doetsch’s father, an electrical engineer, took her to a Mizzou Engineering awareness event as a high school junior, where she first met Paul Chan, associate professor emeritus in biomedical, biological and chemical engineering. That meeting proved significant, as Chan eventually served as Doetsch’s faculty advisor over her four years at Mizzou.

“Dr. Chan was a huge influence, a tremendous help and an incredible voice of reason when I needed it and wouldn’t listen to anyone else,” she said.

Her involvement with Mizzou SWE also played a significant role in Doetsch’s success as an undergraduate student. Joining the fall semester of her freshman year, she is thankful for the mentorship and overall camaraderie provided by the organization.

“I had a pretty tough class first semester of junior year,” she said. “There was a very brief moment when I considered that engineering wasn’t the right path for me but one of the things that immediately changed my mind, among others, was ‘if I switch out of engineering, I can’t be president of SWE next year.’”

In addition to her participation with Mizzou SWE and other campus and Mizzou Engineering organizations, Doetsch also was part of the Honors College Discovery Fellows program her freshman and sophomore years. She believers her activities outside the classroom, in addition to the research opportunities presented by Mizzou Engineering and the Discovery Fellows program, helped prepare her for life after college. Now she recommends current students take advantage of all that Mizzou has to offer.

“Get involved,” she said. “Not only was it useful for getting internships and full-time jobs but it also helped build a really great network of people who supported my desire to be an engineer.”

Take advance of all that Mizzou has to offer!