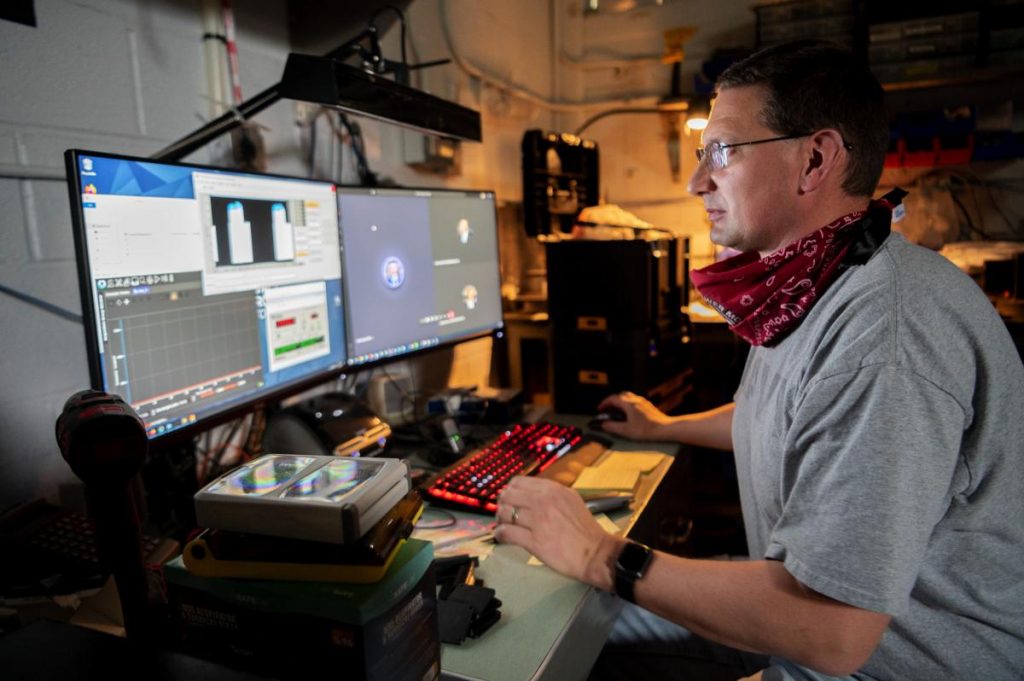 Brett Huhman, U.S. Naval Research Laboratory senior research engineer, communicates with other team members over video chat during testing pulsed Xenon gas lamp source in support of COVID-19 at Washington, D.C. May 8, 2020. Huhman has been sending data to six other NRL researchers who have been teleworking to assess ultraviolet light sources applications against COVID-19 for Navy and Marine environments. U.S. Navy photo by Jonathan Steffen

For his thesis project at Mizzou Engineering, Brett Huhman ’03, ’06, developed a method to use ultraviolet (UV) light to combat anthrax. While it was timely in the early 2000s, Huhman admits he never thought he’d return to that research. Then came COVID-19.

Now, Huhman is part of a U.S. Naval Research Laboratory (NRL) team analyzing how well ultraviolet light sources can combat the coronavirus. The team, part of NRL’s Plasma Physics Division, includes Huhman, who is a senior research engineer, as well as a theorist and a research physicist. Together, they are testing and analyzing various commercial UV light sources marketed to combat COVID-19.

“Most of what we have tested are mercury-based lamps,” he said. “I’ve evaluated some that sit on a table and radiate. There have also been a lot of efforts on hand-held wands that you hold over surfaces such as keyboards to try to disinfect.

“Another type is designed for a whole room such as an operating room. You turn on the lamp source to catch all of the areas you may have missed with traditional spray disinfectants.”

Huhman was most familiar with the latter. While pursuing his master’s in electrical engineering, he came up with a similar method to use UV to combat anthrax—deadly spores that were being used for bioterrorism following the Sept. 11, 2001, attacks.

Professor Randy Curry  served as Huhman’s advisor and the Program PI. The research was conducted by Huhman in the Center for Physical and Power Electronics.

“The professor who did the initial PhD work established the ability to use a special solution with UV to disinfect small surfaces. I expanded it to show you could use it to disinfect entire offices,” Huhman said. “I seriously never thought I would use that again. In my thesis project I used a large lamp very similar to one of the commercial sources I’ve recently tested. It’s impressive that something I worked on as a prototype is now a commercial product.”

After earning his master’s, Huhman went to work for the L-3 Titan Corporation stationed at the U.S. Naval Research Lab in Washington, D.C. There, he worked in the Pulsed Power Physics Branch of the Plasma Physics Division.

He joined NRL in 2007 as a Navy civilian employee and began working on an electromagnetic railgun launcher. In 2012, he pivoted to working on a battery pack system for railguns and recently began work on a larger project looking at optics.

Along the way, he received the NRL’s competitive Edison Memorial Training Program scholarship and earned a PhD from Virginia Tech.

Following his current assignment, Huhman expects to turn his attention to studying the effects of solar radiation on solar power for satellites.

His credits his Mizzou education for having the ability to pivot professionally.

COVID-19 is a good example of why that flexibility is important. Huhman couldn’t have predicted that his graduate education 20 years ago would be critical to helping the Navy combat a global pandemic.

“Engineering, when done right, is very multidisciplinary,” he said. “While I wouldn’t necessary be able to do clinical research, I can read an article, understand the points and know the technology needed to accomplish a goal.  If you’re doing it right, engineering allows you to see a larger picture and then generate a path to a solution.”