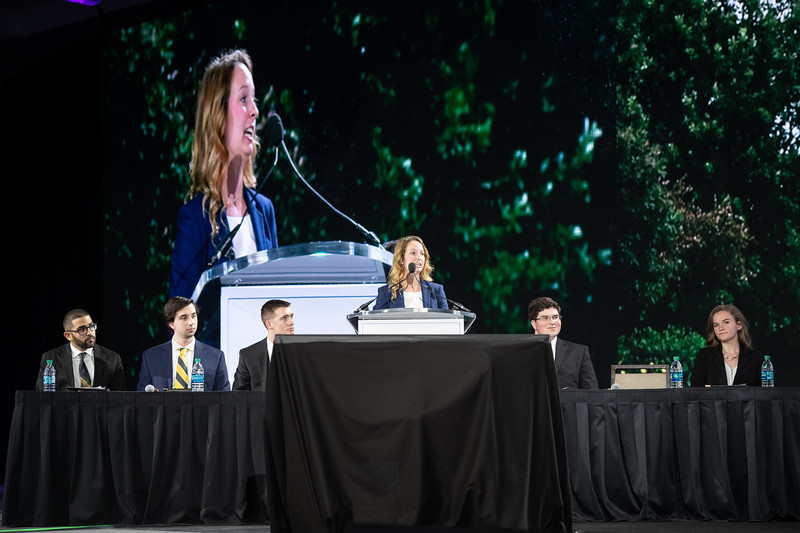 Mizzou’s chapter named their company Star Solutions and made a more than 60 page proposal outlining a precise budget, fabrication and installation processes and safety procedures. Four judges watched their presentation, then asked questions over a 10-minute period. Photo courtesy of Ahmad Atallah.

Each year, the national organization of MCAA presents university student chapters with a major construction project where they were the prime contractors in charge of design and execution. For this year’s project, chapters were tasked with all plumbing, piping and HVAC systems included in a stadium addition to Memorial Stadium at Indiana University according to the MCAA website.

Mizzou MCAA was one of four finalists in the nationwide contest, which seeks to crown the top student mechanical contracting team in the country. The other finalists were McMaster University, Milwaukee School of Engineering and Wentworth Institute of Technology.

Mizzou’s chapter named their company Star Solutions and made a more than 60 page proposal outlining a precise budget, fabrication and installation processes and safety procedures. Four judges watched their presentation, then asked questions over a 10-minute period.

Ahmad Atallah, Mizzou MCAA president and project executive for the competition, estimated that the chapter put in 190 hours of work making the project plan and determining the numbers. He credited the organization and the student competition for igniting his passion and providing a possible new career path.

“For me, I went from not wanting to be involved to president to then project executive. It was really exciting for me. It opened a new career,” he said. “I really appreciate what the MCAA is doing.”

The team consisted of 14 students from various engineering backgrounds and a journalism student, all of whom became experts on various aspects of the proposal. As project executive, Atallah managed each part of the project.

“I kind of made everyone pick what subject they’d like to strengthen themselves in. So I had one who was interested in plumbing and one who had design ideas,” he said. “They all gained plenty of experience through managing their position.”

Paige Theby is one of the new members of MCAA who was surprised by all the opportunities the organization has offered her. At an MCAA conference in September, Theby got an internship with Johnson Controls that she said she never would have been introduced to if it weren’t for MCAA.

“I didn’t even realize that it was going to affect my life as much as it has,” she said.