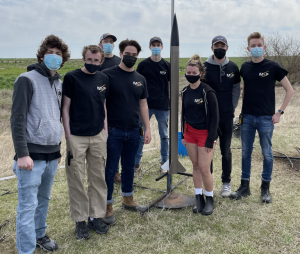 The Mizzou Space Program team at the launch site of their rocket in Argonia, Kansas. Image courtesy of Kendall Feist.

The small village of Argonia, Kansas, is probably not your first choice of destinations for a spring break trip. However, eight members of the Mizzou Space Program (MSP) traveled there to participate in a rocketry contest this year.

This year’s Argonia Cup Collegiate Rocketry Competition featured 17 teams from eight states, including one team from Michigan, battling for the top prize. There is more to the event, though, than just gaining the most altitude, according to MSP President Kendall Feist.

“The goal of the competition was to launch a rocket at least 8,000 feet (approximately 1.5 miles),” he said. “Then we had to drop a golf ball or release something with the golf ball in it that would land as close to the launch pad as possible.”

The team achieved a height of 9,200 feet on their only flight, going as fast as 1,200 feet per second. Their golf ball landed approximately 1,700 feet away from the launch pad, due to the drift from their parachute. Unfortunately, they did not place because they were not able to fully recover their rocket until the next day.

Feist, a senior mechanical engineering student who is also minoring in aerospace engineering, stated that in addition to the collegiate teams at the event, rocket enthusiasts attended as well. Some of the enthusiasts’ rockets achieved an altitude of 45,000 feet (approximately 8.5 miles).

Pivoting to the Argonia Cup

The MSP team had planned to participate in a different competition in New Mexico in June. However, that event switched to a vertical format in February, without having a rocket launch. This left little time for Feist and the MSP team to prepare for the Argonia Cup.

“I really wanted our team to be able to go to an actual launch – something to keep our new members interested,” Feist said. “So, we chose to go to the Argonia Cup. We only had a month to build our rocket, though, so that was a challenge.”

Team members put in at least 10 hours every Saturday to build the rocket for the competition, according to Feist. And he estimated he put in 20 hours per week getting the rocket and team ready.

The Mizzou Space Program is a student-run organization open to all majors across the MU campus, with monthly club meetings and build meetings every weekend.