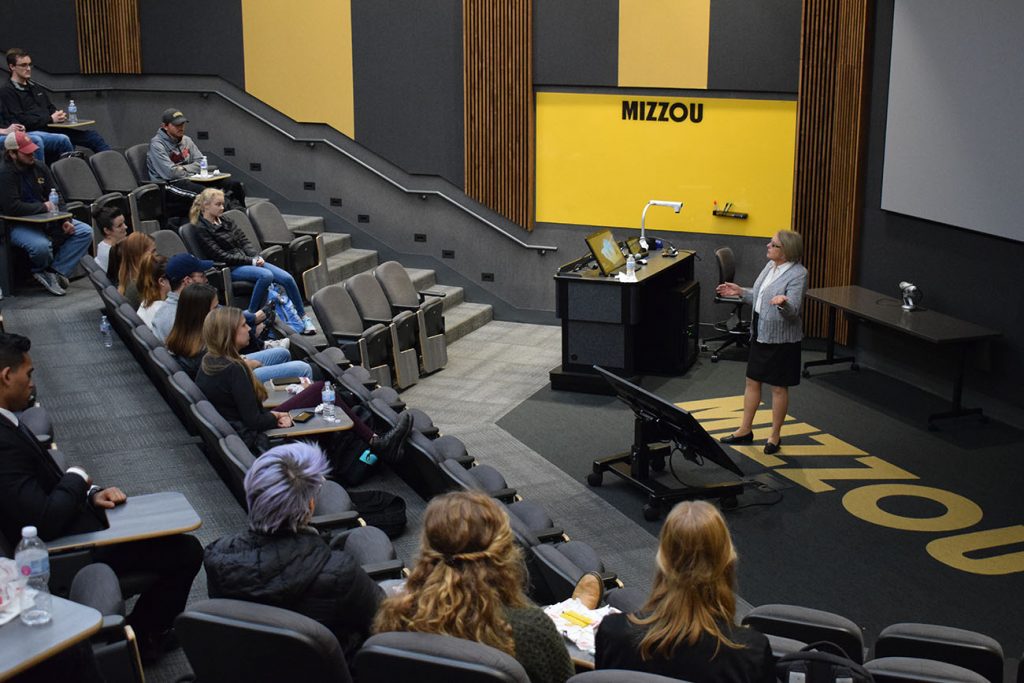 Sharon Langenbeck gives her lecture in Ketcham Auditorium in October 2019. This photos was taken prior to COVID-19 public health orders and guidelines.

Sharon Langenbeck, BS ’74, MS ’76, PhD ’79, took an opportunity to support future Mizzou Engineers. She came back in 2019 to give a guest lecture about her experiences while at Mizzou and to meet with engineering students, faculty and staff. Now, in addition to Sharon being a role model for women engineers, she has pledged resources to help grow the number of women in the engineering field.

The College of Engineering received in total $2.85M from Sharon to support and grow the number of women in engineering. This generous contribution is split into two gifts to set up an endowed chair and an endowed fellowship in the Department of Mechanical and Aerospace Engineering.

“Sharon’s remarkable gift will allow more women to become engineering leaders, whether in academia or industry,” College of Engineering Interim Dean Noah Manring said. “We are grateful Sharon stayed connected to Mizzou Engineering and is creating a legacy for generations of engineers.” 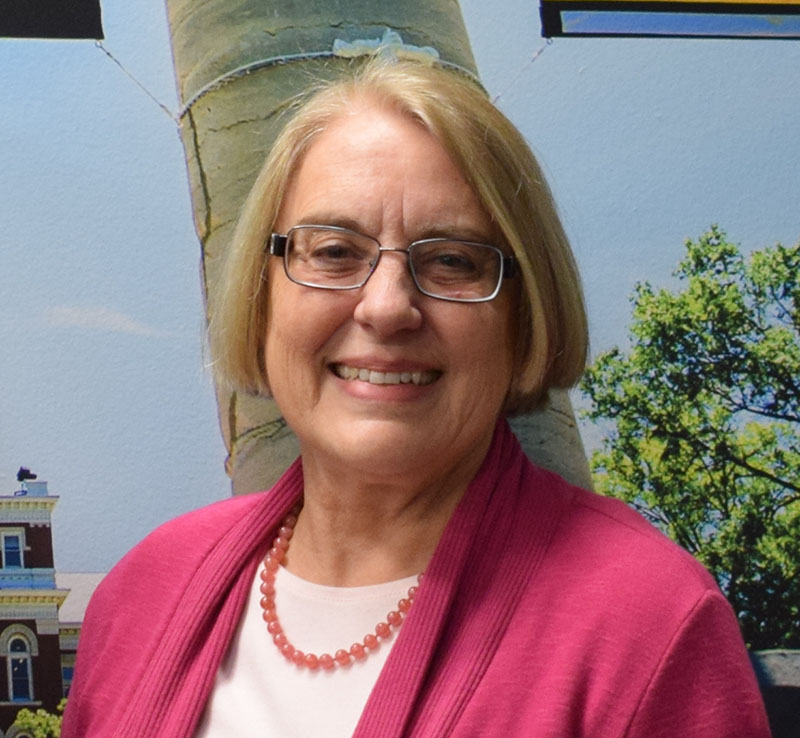 When Sharon Langenbeck started as a freshman in 1971 in the MU College of Engineering, she was one of just 13 female students in an engineering student body of about 1,500. She also was the only female student majoring in mechanical and aerospace engineering at Mizzou. In fact, throughout her long, successful career as a mechanical and aerospace engineer, Sharon often found herself breaking the glass ceiling in what was and continues to be male-dominated industries. She credits the support of her father, her sister and her high school math teacher for giving her the confidence to pursue her dreams and the determination to challenge the status quo.

A Love of STEM

Sharon took every math and science course that Mehlville High School in St. Louis offered and competed in science fairs throughout high school. Her father was a mechanical engineer, which she said motivated her to pursue engineering in college. He often talked to her about various engineering disciplines she might consider when she graduated from high school in 1971.

“He said, ‘In my experience, when I would be looking at various companies, the people who became the plant engineers and moved up in engineering tended to be mechanical engineers,’” she said. When she was younger, her father took her to a brewery in Bellville, Illinois where he worked and explained to his daughter how the beer was made, packaged and delivered.

“From raw materials to end product—it was fascinating to me to see how it was made,” she said. “That’s really what engineering is all about, and so I’ve always remembered the impact that had on me.”

Sharon also credits her math teacher for her junior and senior years of high school for encouraging her interest in math and science. “She was so supportive, but she also made sure if you had written something that your English was correct as well,” Sharon said. “She was a ‘whole picture’ type of person who also taught night school at Washington University and was on the State Board of Education, so she was not your typical math teacher.”

Sharon’s extensive math preparation in high school allowed her to enroll in Calculus II her first year of college and, by going to summer school for her undergraduate research, she managed to earn her bachelor’s degree in three-and-a-half years. She immediately began work on her master’s degree because “my parents always said you don’t finish your education until you finish a master’s” but she had no intention of going further.

“I fell into the PhD—it was never part of my plan growing up that that was going to happen,” she said.

Sharon was a few weeks from finishing her master’s in the spring of 1976. She and her first husband were trying to decide where to go next for employment. He had a master’s degree in biochemistry and determined that he needed to get a doctorate to pursue his career goals.

Sharon’s engineering career began in 1979 at Lockheed in Burbank, California, a company with 25,000 employees. She was the first woman with a technical doctorate to work at Lockheed. She served as a program manager, then as assistant to the vice president of science and engineering at Lockheed Corporation, and finally as division manager of advanced metal and ceramics at the Lockheed Aeronautical Systems Company. After eleven years at Lockheed, Sharon accepted a position at NASA’s Jet Propulsion Laboratory (JPL), where she would spend the rest of her career steadily making inroads in what remained a male-dominated industry.

“When I was hired at JPL, one of the first projects I worked on was the Wide Field Planetary Camera 2 for the Hubble Space Telescope,” she said. The Hubble Space Telescope was launched in low Earth orbit in 1990, but its main mirror had been ground incorrectly. A new instrument would have to engineered to correct the spherical aberration that had compromised the telescope’s capabilities and Sharon was responsible for the mechanical work.

“The mechanical section at JPL was notorious for running over their budgets—they only thought of the best product and didn’t take cost into effect, so when they heard of my background and my desire to get involved in some projects, the project manager put me in charge of the mechanical work for the replacement instrument,” she said. Her team completed the project on time and within budget.

Sharon then wanted to return to line management; she had been both a project manager and a line manager at Lockheed and enjoyed the latter more, so she applied and became the deputy section manager for mechanical engineering at JPL. At that time, her section manager was beginning work on the Mars Pathfinder spacecraft and rover, so she essentially ran the section for six months until her manager moved to the Mars Pathfinder project full-time. She applied to replace him.

“Upper-level management was not supportive,” she said. “They said, ‘You can’t put a woman in that job.’ It’s almost exclusively a male section, and it is one of two of the most critical sections for the success of our projects. So, this was a premier section that got lots of scrutiny. Upper management said this isn’t going to work.”

However, her immediate supervisor at the time went to bat for her and convinced upper management she was well-qualified for the position. Sharon got the appointment and held that job for 11 years. During her time as section manager, she hired a number of women and promoted a number of women, and men, to higher levels.

In 2004, she became a Project Element Manager for JPL’s Mechanical Engineering Division and retired four years later. During her time at JPL, Sharon was awarded the NASA Exceptional Achievement Medal, the NASA Space Flight Awareness Award – Mid-Level Management, and the NASA Exceptional Service Medal, among other accolades.

While working on her doctorate at Mizzou, Sharon learned about Zonta International, a global organization of professionals empowering women worldwide through service and advocacy. The organization offered the Amelia Earhart Fellowship, which she applied for and received in 1977 and 1978. This year, Sharon became president of Zonta International and Zonta Foundation for Women.

In October 2019, the College of Engineering invited Sharon to return to her alma mater to share her memories as a Mizzou Engineering student. She spent two days touring the college, meeting with faculty, staff and students, having lunch with the Women of Aeronautics and Astronautics and giving a presentation in Ketcham Auditorium. How does she feel serving as a role model for the next generation of engineers?

“Extremely proud and inspired,” she said. “It’s just so meaningful to feel that I am that person to help others. I didn’t have that, and I know that it means a lot to be able to do that. It comes full circle back to here, and Missouri is still my home.”