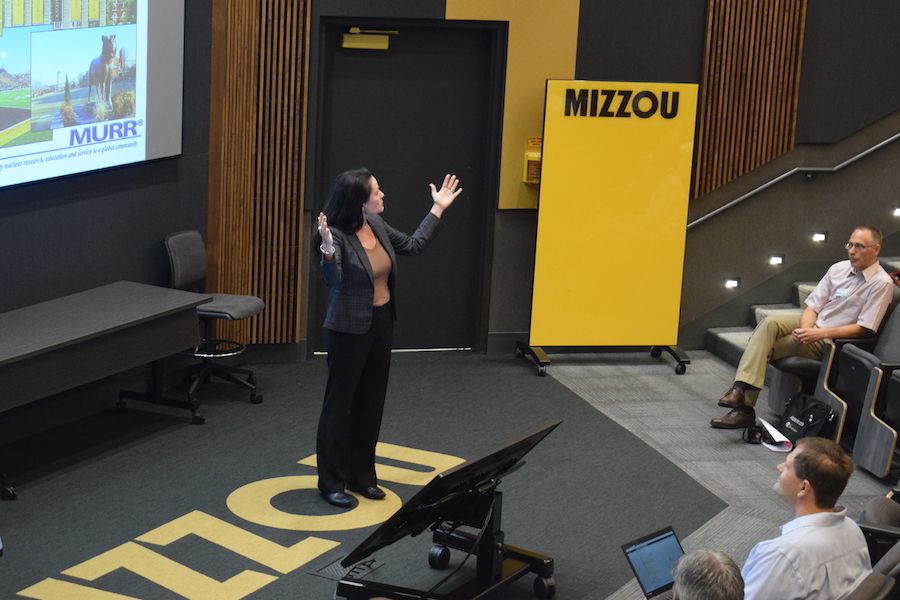 Whenever some of the top minds in any given industry gather in a specific location, that place typically has some level of importance to the industry.

That’s why playing host to the U.S. High Performance Research Reactor (USHPRR) Stakeholder Meeting is such a big deal for Mizzou and the MU College of Engineering.

Nuclear research and energy leaders from the U.S. Department of Energy, national labs nationwide, the Nuclear Regulatory Commission, partner institutions and industry leaders have descended on MU for this annual meeting, which will include sessions on topics such as reactor conversion, fuel qualification, fuel fabrication, cross cutting, quality assurance and a variety of other reactor-related topics.

It’s also a chance for MU to showcase the MU Research Reactor, the highest-powered research reactor on a university campus nationwide. The research done there focuses on more than just energy, however. MURR also has a tremendous impact on the medical fields, and the combination of expertise from MU’s various schools and colleges — including Engineering — and MURR’s capabilities makes Mizzou a hub for key medical research. This helped lead to the creation of the upcoming NextGen Precision Health Institute, as well as the decision to hold the USHPRR meeting in Columbia.

“MURR is the sole U.S. supplier of the active ingredient for four FDA-approved radiopharmaceuticals: One treats the excruciating pain of metastatic bone cancer, one treats inoperable liver cancer, one treats neuroendocrine tumors in the midgut and one treats thyroid cancers,” MURR Associate Director of Reactor & Facilities Operations Les Foyto said. “In addition, MURR is the only domestic producer of the most-used isotope in nuclear medicine.  MURR is recognized both nationally and internationally for our role in reliably supplying radioactive isotopes for medicine.”

Mizzou Engineering has had a longstanding relationship with MURR, working on a wide variety of projects in several areas, from power generation to isotope production to radiopharmaceuticals and everywhere in between. This week offers a chance for both to build new partnerships with the Department of Energy and industry collaborators.

The College of Engineering has educated generations of world-class engineers with critical nuclear expertise. Recent alumni with nuclear backgrounds have found employment at such places as the U.S. State Department, Idaho National Laboratory, Procter and Gamble, Boeing, Honeywell, Northrup-Grumman, and various branches of the U.S. military, among others. Additionally, the USHPRR program has supported a variety of graduate and undergraduate projects and theses.

“Being able to partner with DOE national labs and MURR is critical for us to generate competitive research proposals that utilize and/or develop nuclear technologies,” MU Mechanical and Aerospace Engineering Associate Professor Gary Solbrekken said. “MURR and the national labs have practical experience in running nuclear installations around the world and have an understanding of the issues that exist in their operation. These issues create opportunities for further research and development partnerships.”