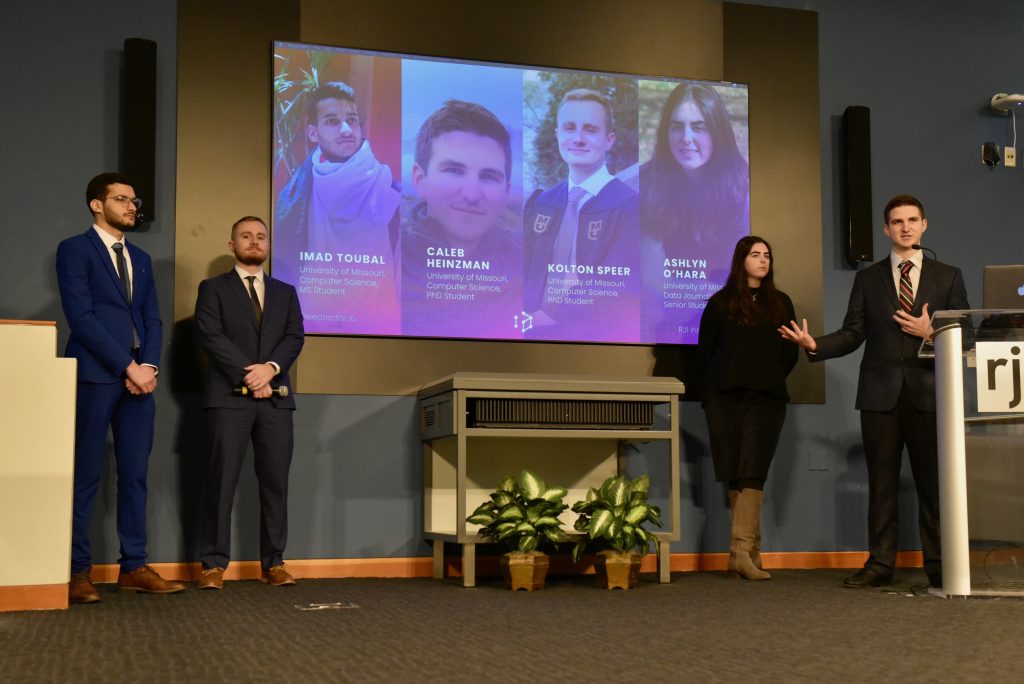 Imagine watching a video from a presidential candidate on your favorite political blog, only to find out later that the candidate not only disavows the video but claims she never made the video in the first place. These so-called “deepfake videos,” which use fabricated photos and audio, are among the biggest challenges facing the news industry. With that in mind, the University of Missouri’s Reynolds Journalism Institute (RJI) recently hosted the annual Student Innovation Competition, challenging students to create a program or tool to fight deepfakes. The winning team was comprised of three graduate students in the College of Engineering and a senior majoring in data journalism in the MU School of Journalism.

The War of Disinformation

Kat Duncan, the interim director of innovation at RJI, says deepfakes are a serious issue that will only get more complicated as technology advances.

“The easier it gets to spread misinformation and lies, the harder it is for the public to know what to trust when they read, see or hear it from news organizations and on social platforms,” she said. “We need to be able to prove if content has been tampered with or not, which means we need better tools that are accessible to everyone. We need to be able to differentiate between real and fake for the health of our country and democracy.”

Duncan says the winning entry, from team Deeptector.io, stood out because the team had reached out to the public and journalists to test it and made changes to their product before they presented it at the Feb. 8 competition.

“They had a great presentation and a tool the judges could test themselves on their phones, so they knew it was working and functional,” she said.

Caleb Heinzman, a graduate student in computer science, says “Deeptector.io” is simply a combination of “deepfake” and detector,” which he calls a fitting name for a tool that detects deepfakes.

“This is a huge problem in the field of artificial intelligence, which is why we thought we would be a perfect team for fighting it,” Heinzman said. “Three of us are currently graduate students focused in the field of computer vision. We began by doing research on how deepfakes are created, and then began designing our own algorithm based on this information.” 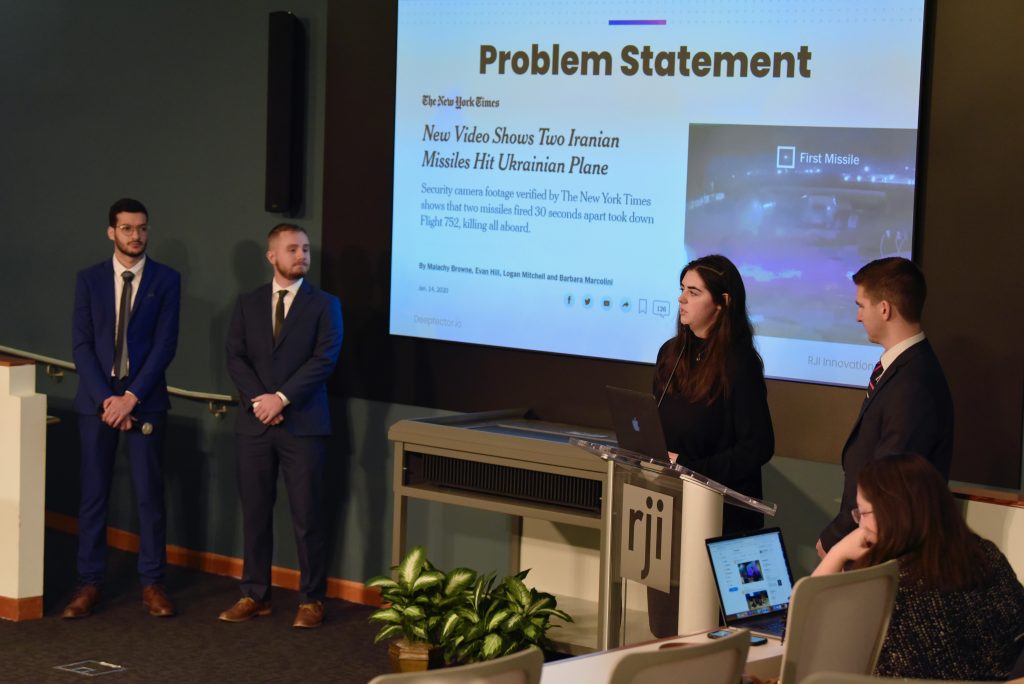 Data journalism student Ashlyn O’Hara gives a presentation at the Student Innovation Competition while her team members look on.

He said the reason Deeptector.io won the competition is because each member of the team contributed a unique skill to the project. The team included Ashlyn O’Hara, a senior majoring in data journalism, and computer science graduate students Kolton Spear and Imad Toubal.

“As a multidisciplinary team, we all contributed to the project in a way that made sense to our individual strengths,” Toubal said. “We started as three computer science graduate students, and right off the bat we knew we needed a journalism perspective, so we added Ashlyn to the team.”

Duncan says most of the teams in the competition were interdisciplinary.

“The most successful teams have always been the teams that are a solid mix of skills—from graphic designers to coders to journalism majors,” she said. “They each add their own abilities to the final product and are stronger together than they would be apart.”

Heinzman said his team used artificial intelligence to predict if a video is real or fake.

“A user can simply drag and drop a video or an image into our website and it will produce a prediction with a high degree of accuracy,” he said. “This can be incorporated in newsrooms or media companies to verify that videos are real and not simply created for malicious purposes.”

He noted that a popular deepfake video is that of the actor/comedian Jordan Peele pretending to be President Obama.

“He did this as a joke, but if something similar was done with malicious purpose, it could have serious ramifications,” Heinzman said. “It could ruin people’s careers, be used to sabotage large companies or even be used as propaganda to take down governments.” 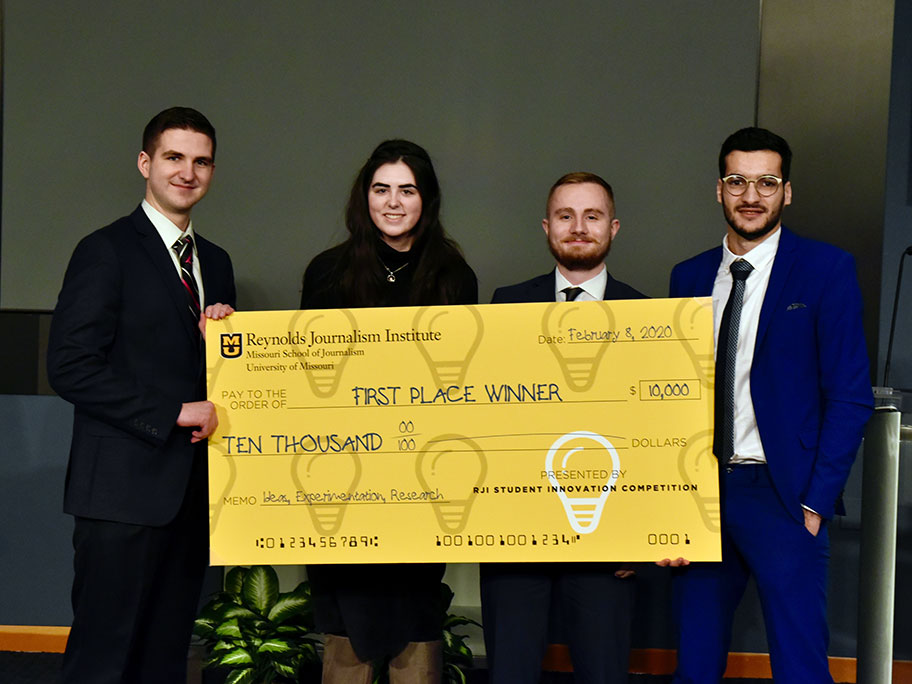 Toubal says their deepfake tool is unique because it uses deep learning to continuously learn and improve based on new data, so as deepfakes become more difficult to distinguish from real videos, the tool gets better at detecting them. He said the team hopes to continue working on their tool and is looking for ways to commercialize it.

Duncan said the student teams get to decide whether to continue to develop their tools and seek investors or other types of support, and noted that some teams have turned their creations into full time jobs. She thinks the tool developed by Deeptector.io has that potential.

“Their tool is very user friendly and intuitive,” she said. “Though it probably needs further development to be more accurate, it was the program that seemed the closest to being ready to deploy into newsrooms and tackle the deepfake problems we face today.”

Heinzman said his team thinks there is a large potential market for tools to fight deepfakes, and the team would like to become a player in that market.

“If we could help stop this problem before it becomes a serious issue, that would be a great goal,” he said.