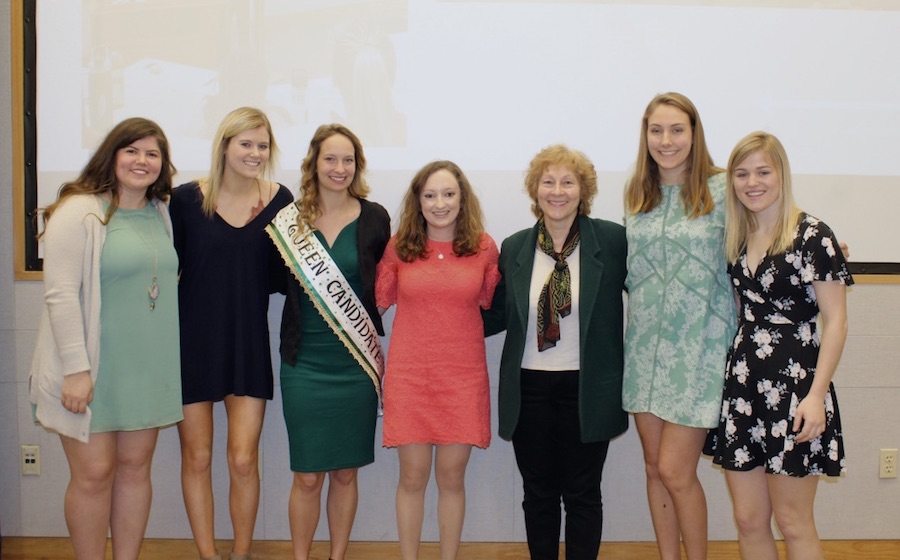 Kate Nolan said she had always secretly wanted to be the Ada Wilson speaker, but was expecting it to be 20 or 30 years into her career, not just six.

Nolan spoke to a crowd of students March 16 at the Ada Wilson Lecture, then joined students at the Society of Women Engineers’ Green Tea— one of Engineers’ Week’s most anticipated traditions.

The talk, named after the College’s first woman engineering graduate in 1907, served to show young female engineers that they can all be successful in engineering no matter the challenges they face. Nolan has spent the last six years at Boeing as a materials and process engineer but said it was not the easiest path to get there. However, her network through SWE helped give her the support system she needed.

“At one point, I wondered if should just change my major and leave engineering. But I couldn’t bear giving up this career dream,” she said.

Nolan is a former SWE president and E-Week queen candidate, and her involvement with SWE and the College gave her the motivation to push through. Now, she’s a lifetime member of SWE, filling various roles like the chair of SWE’s Society Level K-12 STEM Outreach Committee.

“Joining SWE was one of the best decisions I’ve ever made. When I look back at my life so far, I can’t help but notice that so many of my decisions have come about because just one person planted an idea or helped me find something new,” she said. “I’m trying to be that voice or influence for those who are coming behind me.”

Addison Korsmeyer, the current president of SWE, has been attending the lectures since her freshman year and said they are very inspiring.

“It gives other women in engineering hope and encouragement as they finish their engineering degree. It’s something to be proud of,” she said. “Knowing that she [Nolan] was a past SWE president and someone who I could relate to was really encouraging.”

After the lecture, students joined Melinda Cartwright, in her and MU Chancellor Alexander Cartwright’s home for the Green Tea. The Green Tea has been an MU tradition for over a century, and Cartwright is happy that MU has made it a part of its history.

“I hope this helps them maintain their pride in Mizzou and continue to feel those connections once they leave campus,” she said. “We want to maintain the traditions, and it’s important for us to have events for students. We’ve tried to do as many events as possible and also start new traditions.”