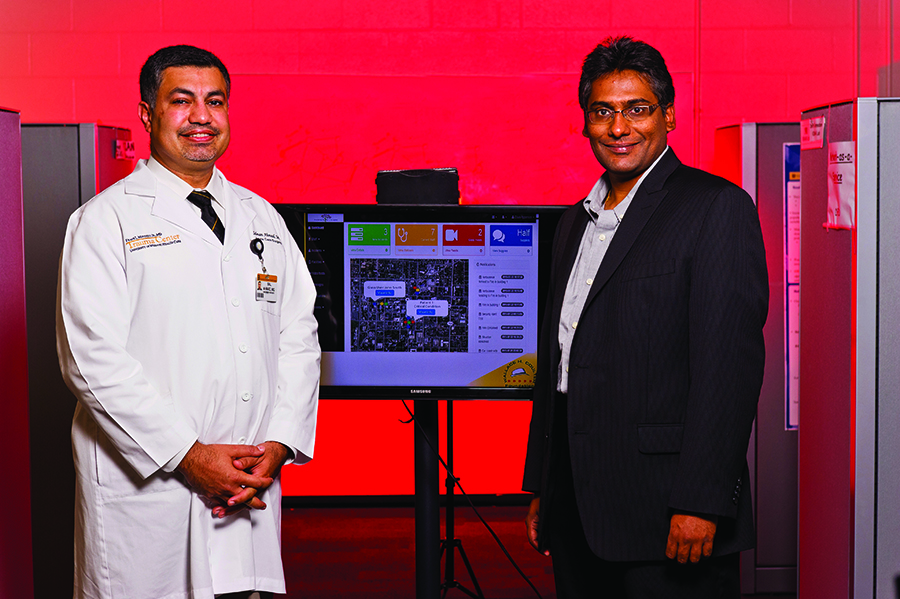 Real-time data and information sharing is critical for first responders, especially in situations that don’t allow for ready-made internet access. And after years of research supported by the Coulter Translational Partnership (TP) Program and the National Science Foundation, coupled with a recent market research, an interdisciplinary Mizzou team has the solution.

Panacea’s Cloud is a collaboration between Mizzou Engineering’s Prasad Calyam and the School of Medicine’s Sal Ahmad that utilizes Internet of Things devices such as smart eyewear, edge computing devices, wireless routers and virtual beacons to give first responders the ability to relay real-time information to medical directors. This allows for informed, systematic care in critical disaster and public safety situations where web-based communication or cellular network systems may otherwise be compromised.

EMS1, an industry leader for media among first responders, conducted market research about Panacea’s Cloud capabilities, and collected data via a survey from over 1,700 respondents. Their results that validated Panacea’s Cloud benefits were presented at the 2019 version of the IEEE International Conference on Mobile Cloud Computing, Services and Engineering:

“They validated that on-site incident command systems that provide real-time situational awareness are really lacking, and that there is a real need for Panacea’s Cloud-like systems that can augment advanced technologies being used in public safety organizations…” Calyam said.

The strength of Panacea’s Cloud is its ability to be deployed at one location or to string multiple devices together to allow for coverage of a larger area for needs such as search-and-rescue. Trials conducted with FEMA’s Missouri Task Force 1 showed that the average data entry time per incident with Panacea’s Cloud in search and rescue scenarios was three times faster than the data entry time with their current GPS-based devices.

It utilizes cloud computing technology to help triage information and provide augmented reality benefits paired with human communication and geolocation capabilities with contextual markers on a map interface. It works with IoT devices to create a usable network capable of sharing a ‘common operating picture’ when no internet capabilities exist at the disaster incident site.

“You can set up a real incident command system in the middle of nowhere using a custom enclosure unit we have prototyped. You can make decisions on where to send ambulances, where responders should go, where medical supplies are more needed. In our latest research/development efforts, we are working with the Mizzou Police Department on campus safety use cases, and are also studying how drones (unmanned aerial vehicles) and Panacea’s Cloud (acting as a ground control station) can be used in disaster incident scenarios to create environmental situational awareness across a large region to plan an efficient and effective response,” Calyam said.