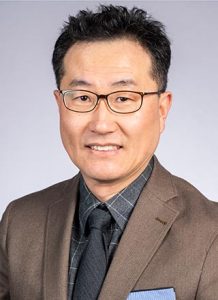 Chanwoo Park, associate professor and director of the Heat Transfer/Sustainable Energy Laboratory in the Department of Mechanical and Aerospace Engineering (MAE), was elected to the grade of “Fellow” in the American Society of Mechanical Engineers (ASME).

Only 3% of ASME members have been elected to be a Fellow. The organization’s Committee of Past Presidents bestows the “Fellow” grade of membership to nominated candidates for their outstanding engineering achievements.

Park’s research has focused on heat and mass transfer, boiling and condensation, battery thermal management, and thermal desalination, among other topics. One of his most recent research grants is from the U.S. Army Research Laboratory for unmanned aerial vehicle thermal management. Other research he has conducted has been funded by the National Science Foundation (NSF), National Aeronautics and Space Administration (NASA), the U.S. Department of Defense, Department of Energy, the Environmental Protection Agency, and Hyundai Motor Company. Park received the prestigious NSF’s CAREER award in 2014. He previously worked at the Ford Motor Company, Advanced Cooling Technologies, Inc., and after that, the University of Nevada-Reno.