A highly renowned researcher took a few minutes out of his busy schedule this week to address graduate students in the Electrical Engineering and Computer Science Department. Satish S Nair is an EECS professor, director of the Neural Engineering Lab and one of the first researchers to begin using engineering principles to better understand the complex circuits of the brain.

During a monthly EECS Graduate Student Association (GSA) virtual meeting, Nair gave an overview of his work, then provided students with some tips to boost their own productivity.

Participating in the EECS organization is a good first start, he said, as it develops leadership and other practical skills. Nair also recommended minimizing distractions while working or even relaxing.

“Distractors disrupt processes in the brain,” he said. “If you have 10 programs running, how can you focus on any one? If you think about that in terms of your laptop, if you open a lot of stuff, it crashes. That translates to your own brain.”

Taking walks, enjoying hobbies and avoiding upsetting media are also keys to living a happy, productive life, he said. “We don’t talk about that enough, and we don’t value it enough.” 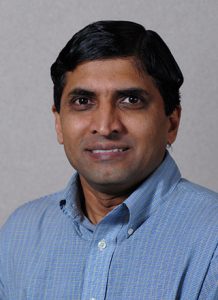 Following his formal presentation, attendees had the opportunity to tap into Nair’s brain and discuss his work in the context of their own projects. For instance one student wanted to know how studying brain models compares to his research around the autonomous systems that power drones.

The brain is more complex, but researchers are getting closer to starting to understand its hardware and its operating system, Nair said.

He is currently working on a project analyzing data from a collaborator who inserts high-density neural probes  into rodent brains to solve the mystery. The probes’ sensors can monitor close to 300 neurons and records the spikes each neuron emits. Similar to radar technology, researchers are using those signals to get more information about what actually happens in the brain when, say, a rodent is deciding whether to risk potential danger in exchange for the reward of a food pellet.

“Psychology says based on a behavior, we believe something is going on, but now we are able to get data,” he said. “But what language are neurons talking? What is their hardware? How are they configured? We’re in the beginning stages of understanding that.”

In the meantime, he encouraged engineering students to continue to look to psychologists and psychology books for answers, and potential interdisciplinary projects in the area.

The EECS Graduate Student Association—informally known as the “GEECS”— helps foster professional and social relationships among those pursuing master’s and PhD degrees.

Meetings are held monthly. Prior to social distancing restrictions, the group also held special events such as trivia nights and fundraisers. This semester, the organization improvised and offered game nights virtually, Howe said.

This week was Howe’s last meeting as president. She’s graduating this month with a Master of Science in Computer Engineering. Trevor Bajkowski, who is working on a PhD in computer science, will transition from serving as vice president to president this coming semester.

Howe encourages all EECS graduate students to get involved in the organization. “EECS GSA, or GEECS, is a great group to connect with other graduate students and faculty,” she said. “It is a low-commitment organization, where we want everyone to have fun. GEECS loves to meet new students.”