Gasoline doesn’t come with an expiration date, but over time, some components of unused fuel and crude oil can oxidize and form gum-like deposits through a process called autoxidation. Scientists understand the chemical steps for this process, but they aren’t sure why it happens in some cases but not others. Now, a Mizzou Engineer has received funding from the American Chemical Society’s Petroleum Research Fund to help solve that mystery. 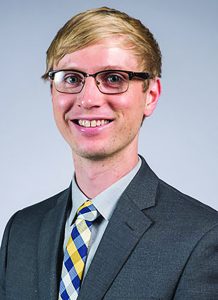 Matthias Young, an assistant professor of biomedical, biological and chemical engineering, will specifically study how nitrogen-rich molecules in fuel interact with the vessel or container that the fuel is stored in to see if surface chemistry is the culprit behind differences in gum formation.

“Previous studies have found that different surfaces lead to different rates of gum formation in fuel,” Young said. “When fuel is in contact with some materials, gums form rapidly, and for other materials, gums don’t form at all, but we currently don’t understand why. For this project we aim to understand specifically what properties of the material surface impact pyrrolic gum formation.”

Eventually, this knowledge could be used to develop container surfaces or fuel additives that block the autoxidation process and halt the formation of pyrrolic gums in fuel storage vessels and engines. That could give fuel, including jet fuel and gasoline, a longer shelf life.

This is Young’s first research project focused on a petroleum application, however he’s no stranger to working with pyrrolic gums. In the Mizzou Thin Film Coatings and Materials Electrochemistry Lab, Young and his research team have spent the last few years studying the chemistry of pyrrolic molecules. Building from this understanding, Young and his team have developed a way to control the thickness and composition of pyrrolic gums.

“We’ve been interested in forming polymers that look very similar to the pyrrolic gums that form in fuel and using these polymers for electrochemistry applications such as water treatment and energy storage,” he said. “But in the petroleum field, these polymers not desirable at all. In this project we will build on our understanding of how these polymers form and use that understanding to help stop gums from forming in fuel.”